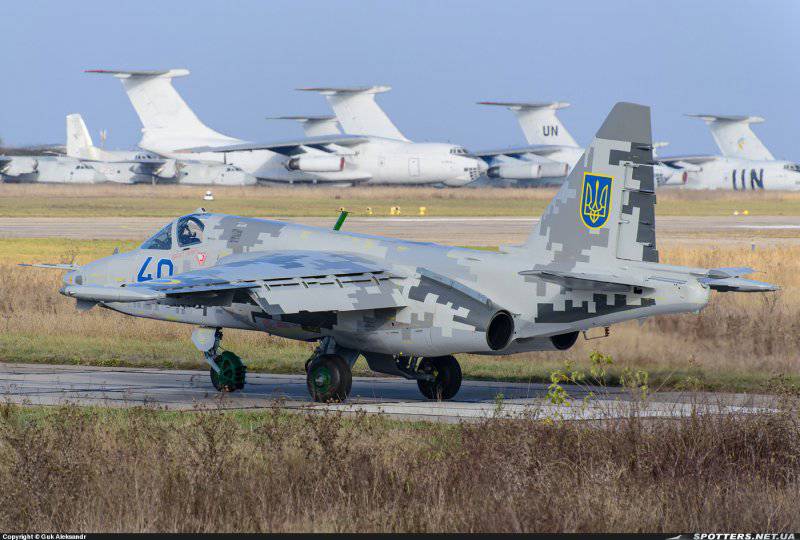 At the State Enterprise “Zaporizhia State Aircraft Repair Plant“ Migremont ”, the next modernized Su-25М1 attack aircraft with the tail number 40 - blue was rolled out.

The ongoing modernization of the Su-25М1 aircraft is carried out with the involvement of exclusively Ukrainian enterprises, which ensures the optimality of the work performed on the parameters “price - efficiency”.

According to the chief engineer of MiGremont Sergey Furdilo, during the repair on Su-25 aircraft, all modernized equipment of domestic manufacturers is installed - satellite navigation, a new SHS system, a modernized radio station, and a modern sight meter. “All this equipment is given to the aircraft a completely new face. In addition, thanks to him, a mid-level pilot will be able to fly on an airplane, using high-precision powerful weapons for ground targets. It is very pleasant that the Ministry of Defense of Ukraine is serious about the development of domestic aviation. And we, the factory workers, feel this, ”he said.

Features of the upgraded aircraft lie with improved navigation accuracy when flying en route at any altitude. As for combat use, the accuracy of bombing and firing rocket and artillery weapons at ground targets was improved by an order of magnitude.

The modernization of the Su-25М1 aircraft consisted, firstly, in replacing the analogue sight of the Su-25 serial with a digital sight. This improves aiming accuracy by approximately 30%.

Secondly, due to the installation of a satellite navigation system, the aircraft is capable of hitting targets even when the pilot does not see them visually, but he knows their coordinates. The aircraft is now able to use standard weapons for ground targets, day and night, in conditions of poor visibility and without leaving the clouds. Significantly, almost 3 times, increased altitude use of weapons.

And this, in turn, allows to avoid the possibility of destruction of the MANPADS plane and anti-aircraft artillery. Significantly reduced the time of stay of the aircraft over targets.

The module of air parameters and the onboard register of digital parameters of the BRCP are installed.

Ctrl Enter
Noticed oshЫbku Highlight text and press. Ctrl + Enter
We are
Roll-out An-178Modernization of BMD
10 comments
Information
Dear reader, to leave comments on the publication, you must to register.