November 25 2013
52
From the Ministry of Defense, information was again received that by the end of the year fundamental changes could be made to the Law on Military Duty and Military Service. These changes will affect the choice of service life. The choice is the following: if a young man between the ages of 18 and 27 years is called up for military service, his conscription will be exactly 12 months, and if he decides to enter into a contract with the Ministry of Defense, the contract will be reduced from the current three years to two. In other words, you want to quickly go to the "demob" - serve a year of "time", and you want to live outside the barracks (for example, in a rented apartment), receive a salary (voiced around 30 thousand rubles a month for a private), enter the military mortgage - enter into a two-year contract with MO. 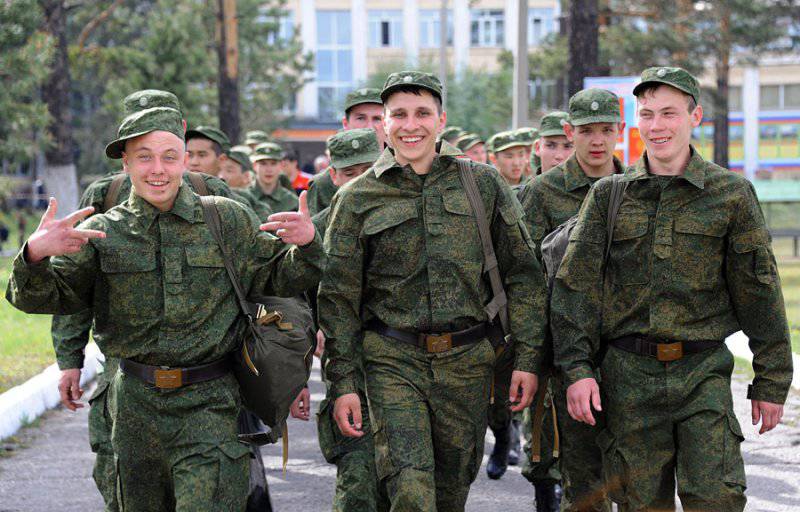 Until recently, it was a question that the right to conclude a two-year contract from the first day of service will be granted exclusively to university graduates. Now, Secretary of State of the Ministry of Defense Nikolai Pankov notes that there are plans to provide such opportunities to graduates of secondary vocational schools (colleges, technical schools and vocational schools, which, from 1 September 2013, according to the norms of the new law “On Education”, also become part of the ACT) .

At the same time, it is not the first time in the main military department that they declare that they will not succeed. That is, if one of the young people decides to immediately conclude a contract for two years, serve for two months "for decency", and then terminate the contract for any reason, then the remaining time will be "asked" to serve according to the formula conscription is equal to two days of service under the contract ". In one of the past articles on “Military Review, this topic was discussed after it was first voiced by representatives of the Ministry of Defense. The article cited examples of calculations of the period that a contractor would need to serve as a recruit, if he decides to stop fulfilling his contractual obligations, but some readers did not heed the calculations and decided that there would be cases in which it would not be necessary to serve. In fact, if the contract is terminated before the expiration of two years of service, it will be necessary to serve as a recruit in any case.

Example. If a young man served a contract for six months and decided to terminate the contract, then he will remain 9 months as a draftee. Where did this figure come from? That's where: from 24 months of contract service, the period during which the contract was executed, in this case 6 months, is subtracted, and then the resulting number is divided into two (as the ratio of the terms of the contract service and conscription service).

Even if the contractor has served 1 a year and 10 months before the termination of the contract, he will still have to walk for a month in the rank of “conscript”: (24-22): 2 = 1 a month.

Why does the Ministry of Defense support the idea of ​​amending the law? Official report: to popularize the contract service and, as a result, to increase the number of contract servicemen in the Russian army. Today, according to information from the main military department, contract servicemen in the ranks of the Republic of Armenia are 206 thousands of people. And after four years, according to the program, their number in our army should be 425 thousands. The new amendments to the law “On Military Duty and Military Service,” according to the leadership of the Ministry of Defense, should contribute to this (an increase in the number).

In fact, the new proposal from the main military department looks quite viable. If in large Russian cities with vacancies for young people there are few problems, then in the provinces not every young man immediately after receiving a university degree or a technical school is able to find a job for 30 thousand rubles a month. "Not everyone" - this is an understatement. In a number of regions, such a salary is generally unattainable for young people.
That is why many graduates are clearly interested in the proposal to conclude a two-year contract. It is the monetary allowance and, naturally, a certain hypothetical advantage of the contract soldier over the draftee (living outside the barracks, for example) will be able to do their job, and the number of servicemen serving under contract in our army will start to grow. Of course, one of the readers of draft age will say that he “in the civilian world” gets “a lot more” than promised in the Ministry of Defense, but in reality such (well-paid young people), as stated in the film “Garage”, “an overwhelming minority ", Especially if you ignore Moscow or Ugra.

Will the growth in the number of contract servicemen be systematic and progressive? - a question, the answer to which depends on the contract policy of the Ministry of Defense of the Russian Federation. If the Ministry of Defense is going to actually provide the servicemen with the benefits that are being spoken about now (and this is not only decent wages and the possibility of living outside the military unit, but also the entry (at the request of the soldier) into the military mortgage after two years of contract), then there will be growth. If all this is a fairy tale “about a white bull” with the aim of banal luring into contract rows for a tick, then the new amendments will not lead to anything good.

There is a special nuance in this proposal. How much will such contract soldiers - people who have just joined the army from the school, lyceum, institute bench - be different from the "conscripts"? In other words, in this case will the concepts “contractor” and “military professional” at least somehow correspond to each other. Even now, they often fit together with a big stretch, and if there appear in the army (already by 2017) almost half a million people, who until recently had little to do except for a ball-point pen and a mobile phone, then the declared effectiveness of such an army would raise questions .

The very idea seems to be worthwhile. But the Ministry of Defense believes that after modern institutions, only the masters of their field, specialists with a capital letter, come out into the “big life”. But in reality, such specialists as a percentage of the total mass - the cat wept. They are - yes, but nevertheless representatives of the grayish mass, who, out of a hundred separate academic hours of lectures and seminars, were attended by one and a half hours - many times more.
And where such, God forgive me, "military professional" "shove"? To entrust him with the management of modern military technology - well, well ... After all, he remembers, bends, “kills” what is good - restoration and repair will cost even more than what the state has spent on training such a “specialist”. If you don’t trust anything at first, then what is the very need to attract 425-ty thousand contract soldiers? Will he have time to master all the wisdom of operating the same technology in two years? Again, if the diploma is not a linden, then it is quite, but by that time the term of the contract may come to an end. And then it turns out that the Ministry of Defense should attend not only to blindly gain weight, but also to preserve the personnel potential of the contract - people who had time to understand professional services had time to realize that the goal of professional services is far from just monetary earnings, but still (and this in the first place) - serving the Motherland. But to bring such a thought to a modern young man is extremely not easy ...

In general, before making the transition to the new scheme, you still need to have an exact plan of where and how the skills and abilities of the “new contract servicemen” will be used and whether they will be used for the purpose at all. Let us hope that the Ministry of Defense has such a plan, and that its implementation will go not only on paper.

Ctrl Enter
Noticed oshЫbku Highlight text and press. Ctrl + Enter
We are
The action “Military service under the contract is your choice!” In Rostov-on-Don: future contract servicemen, exhibitions and “Russian Knights”New proposals for the service life of the Ministry of Defense: you want - a year, you want - two
52 comments
Information
Dear reader, to leave comments on the publication, you must to register.