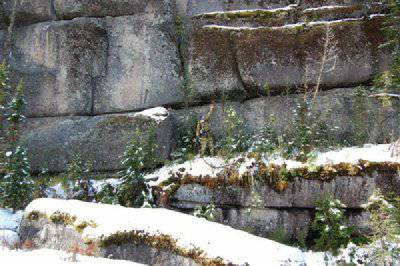 This fall in Gornaya Shoria, found ruins of structures that change our usual ideas about stories Siberia, the newspaper Kuzbass. Mountain Shoria is a taiga region in the southern part of the Kemerovo region, at the junction of the Altai and the Sayans. Larisa Maksimenko, the author of an article in a regional newspaper, wonders: where did the wall of giant “bricks” come from at one of the peaks at an altitude of over a thousand meters?


ТОЛЩИНА a unique granite brick, she says, 7 meters, according to the participants of the expedition, its weight is about 2 thousand tons. That is, it is heavier than the “brick” of the famous Baalbek terrace in Lebanon! And in the masonry it turned out to be places up to the 12 rows of “bricks”, skillfully fitted to each other.

The first place in the discovery of a unique structure belongs to the Kuzbass geologist Vyacheslav Pochetyokin. Back in 1991, working in the South Kuzbass geological exploration expedition, he noticed an incomprehensible structure from a helicopter. And two years ago, despite his disability (Vyacheslav lost his legs due to frostbite in the taiga), he managed to find a mysterious giant wall from the ground.
Larisa Maksimenko gives such details regarding the findings. The expedition found two buildings made of a giant building material. First of all, this is the rest of the walls of the building. The height of the walls is up to 40 meters. "Bricks" fit together tightly. The walls intersect at right angles. Blocks were made, presumably, about 100 thousands of years ago.

In addition, in 700 meters from the first discovery - the rest is still some kind of structure. According to one of the versions of the participants of the expedition, this is the ancient accumulator of the energy of the Earth, something like a giant capacitor. After all, the structure is on the geological fault. The "power" vertical masonry with preserved ceilings. There are traces of some tools on the stones: stripes centimeters in 30, a lot of round holes with a diameter of 7, see

Among the enthusiasts who took up the study of photographs from the discovery site are Yevgeny Vertman, a nuclear physicist, deputy chairman of the Tomsk branch of the Russian Geographical Society. In his opinion, the buildings could build an ancient civilization. “Most likely, its representatives had other, incomprehensible to us and inaccessible technologies,” suggested Yevgeny Gustavovich. - Of course, there are questions: why did they erect the building, how did they manage to lift boulders on mountains above a thousand meters high? We have to answer all this. ”

“The technology of lifting such huge blocks to the mountain is unknown or lost,” he said. - Our scientists, having studied the shooting from the site, came to the input: the buildings in Gornaya Shoria were technically executed. The laying of blocks on each other was carried out without cement and mortar, as if the blocks were softened and stuck together. ”

AMONG The expedition participants were George Sidorov, a writer, a passionate explorer of the secrets of the past. Georgy Alekseevich is a very interesting person. Born in the Kemerovo region. By the father of the Don Cossack. Following the family tradition, Sidorov from childhood studied Cossack martial art. He graduated from the biology and soil faculty of Tomsk State University. He worked in the north of the Tyumen region in the State forest inspection.

During his travels in the north of Siberia, he repeatedly came across traces of an ancient stay in the high latitudes of fair-haired people; local narrators told him about them. As a result of his research, Sidorov came to the conclusion that relatively recently, approximately 2 – 3 was thousands of years BC - the whole north of Siberia was inhabited by a highly developed people for those times.

Another surprising discovery is connected with the fact that George Alekseevich, in his words, had a chance to meet in the forest jungles of the Russian North the keepers of the ancient tradition, hiding under the guise of the Old Believers. People who call themselves the descendants of the Chud white-eyed, or Siberian chaldon, showed them a researcher of the depository of ancient books and musical instruments ...

Recently, a researcher shared his thoughts on the value of a find in Mountain Shoria with Internet users. He expressed alarm at the fact that many artifacts that do not fit into the framework of well-established notions about the past of mankind, disappear from the museums of the world.

Sidorov recalled the Tisul find. According to him, in 1972, marble sarcophagi with people lying in an unknown fluid were raised from the depth of 70 meters from under the coal seam. He found out about this find by chance from an old woman from the village of Rzhavchik, who told how these sarcophagi were taken out under protection. According to geologists, the sarcophagi were buried about 800 a million years ago.

SOME YEARS back, writes Sidorov, to explore the ancient heritage of our ancestors on the territory of the Tomsk region was organized by a permanent search expedition. In the very first year of the expedition, on one of the Siberian rivers 2 solar temples and 4 settlements were discovered. It was possible to find fine ceramics with ancient Sumer ornaments on the temples and on the sites of ancient settlements.

In fact, local historians stumbled upon the ancestral home of the ancient Sumerians in the Middle Ob. If the Sumerians' ancestral homeland is actually open, it means that they come from the Siberian ethnic “cauldron”!

This year a small group of researchers with the participation of Sidorov went to the Mountain Shoria. “Why did we decide to visit this region? Therefore, - he points out, - that a number of familiar geologists have informed us that in the mountains at an altitude of 1.000 and more meters, the ancient ruins of a lost civilization rest, according to the mythology, the civilization of our ancestors.

Together with Kemerovo geologists, Sidorov managed to climb to the first artifact - a giant stone wall, built on top of a mountain. “What we saw is impossible to describe,” he emphasizes. “We were faced with a megalithic stack of blocks, some of which reached 20 meters in length and 6 meters in height. Of these bricks laid the foundation of the structure. Above were smaller blocks. But they were also striking in their mass and size. When we looked at the ruins, we saw on the parts of them traces of an obvious ancient melting. This discovery brought us to the thought of the destruction of the structure due to the powerful thermal effects. ”

Not only in the Mountain Shoria there are ruins - traces of the great distant past, says George Sidorov. As the researchers found out, exactly the same ruins, made of giant blocks, are found in the Altai, Sayan mountains, the Urals, the Verkhoyansk Range, Evenkia and even Chukotka.

Ctrl Enter
Noticed oshЫbku Highlight text and press. Ctrl + Enter
We are
Ruins of Corfe Castle
125 comments
Information
Dear reader, to leave comments on the publication, you must to register.