Seven most interesting versions of the assassination of John F. Kennedy 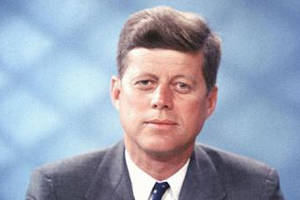 The assassination of 35 US President continues to be the most notorious crime of the 20th century.


On the fiftieth anniversary of the 22 murder in Dallas on November 1963 of 35 US President John Fitzgerald Kennedy, about a hundred and fifty books were published with versions of the loudest crime of the last century, including new ones. Suffice it to say that only the publisher Skyhorse Publishing has published 25 of such books only this year. Cinematographers did not stand aside. They shot several documentaries in which they also try to answer the question: who killed the president and did the killer act alone or was it a big conspiracy?

The suspects include Fidel Castro, the Mafia, the CIA, Edgar Hoover, Lyndon Johnson, the Secret Service and many others. The disputes on this issue, which still interest the Americans, who, by the way, continue to overwhelmingly reject the conclusion of the Warren Commission, recently joined Secretary of State John Kerry.

“I still have serious doubts to this day,” said the chief American diplomat in an interview with NBC, “that Lee Harvey Oswald acted alone.”

By the number of versions, the death of DFK, as Americans often call their 35 president, probably has no equal. Below are the seven most interesting versions.

Undoubtedly, the main suspect in the murder of 35 th US President. He was seen leaving the building of the book depository immediately after the shots, even before the police cordoned off the building. Weapon, rifle Carcano Model 91 / 38 caliber 6,5 mm, allegedly in the investigation of the Warren Commission, he hid behind the boxes. Lee bought it in March 1963, under the name "A. Hedell "by mail.

Less than an hour and a half after the murder, Oswald was arrested at the cinema. He was charged with the murder of a policeman who stopped him on the street. When the patrolman approached him, he grabbed a revolver and shot him five times.

Early the next morning, Oswald was charged with the murder of the president, and in the morning of November 24 was shot and killed by the owner of a nightclub Jack Ruby on leaving the police station.

Proponents of this version believe that the godfathers Carlos Marcello, Santo Trafikante and Sam Giancana decided to remove the DFC, which, with the help of its brother, Prosecutor General Robert Kennedy, declared the United States organized crime a war. It is believed that the mafia helped DFK become president, and he “thanked” her, declaring a crusade against her.

Mafiosi killed the president and framed Lee Harvey Oswald. Proponents of this version claim that the FBI received recognition from Marcello in 1985, but decided to keep it secret.

By the way, in 2014, Warner Brothers was making a film about the Kennedy assassination with Leonardo DiCaprio and Robert De Niro in the lead roles. Its authors believe that John F. Kennedy was killed by the American mafia.

Another very common version is that high-ranking CIA officials Richard Helms and James Angleto hired members of the mafia to eliminate President Kennedy. The knights of the cloak and dagger were not satisfied with the fact that he allegedly intended to end the war in Vietnam and make peace with Communist Cuba and the Soviet Union. Naturally, all this had to take place against the background of the loss of the president’s confidence in spies and, most importantly, cuts in the financing of their department.

According to another version, President Kennedy was killed by the CIA in order to prevent him from making public information about aliens from outer space. Ten days before his death, DFK wrote a letter to the CIA director asking him to show him top-secret documents about UFOs.

He wanted to report this information not to the American people, but to the USSR. Kennedy was very worried about relations with Moscow. The president was afraid that the numerous UFOs appearing in the sky over the Soviet Union could be interpreted by the Kremlin as aggression from the United States and unleashing a war.

In another letter written to the head of NASA, President Kennedy wrote about his desire to cooperate with the USSR in space exploration.

There is another letter on which there are traces of fire and which was allegedly sent by someone from the CIA to the famous ufologist Timothy Cooper in 1999. The attached note indicated that the sender worked for the CIA in 1960-74 and that he saved the document from fire when the agency burned some of the documents. The document says about Ulan. Under this nickname, John Kennedy was listed as a secret service agent.

“As you should know, Ulan was interested in our activities,” wrote the director of the CIA. - We cannot allow this to happen. Please provide your opinion no later than October. Your opinion on this issue will play a major role in the continuation of the group’s activities. ”

Quite a few conspiracy therapists accuse Vice-President Lyndon Johnson, who replaced him as America’s leader, in organizing the assassination of the DFC. The conspiracy, headed by the vice-president of the United States, involved the most radical groups in the CIA, the mafia, Cuban immigrants and even the disgruntled Kennedy members of his administration. The main motive of the LBD was Kennedy’s unspoken intention to change the Vice President at the 1964 presidential election. He was extremely low opinion of his deputy.

Johnson allegedly moved not only the thirst for power, but also the instinct of self-preservation. The post of vice-president and especially the president protected him from accusations of corruption.

“If Kennedy had not been killed that day,” said LBD mistress Madeleine Brown, shortly before her death in 2002, “then Lyndon Johnson would most likely go to jail.”

Dallas was not chosen by chance as a place of murder. Lyndon Johnson was from Texas and controlled the Dallas police. This helped to hide a number of clues. For example, fingerprints in the book depository of the killer, former marines of Mac Wallace, who died in 1971 year.

Johnson and Texas Governor John Connally reversed the route of the presidential motorcade through Dallas so that he proceeded through Dili Plaza.

Many believed that the customer of the murder was LBD: Madeleine Brown, whom he confessed on the eve of the murder; Richard Nixon, who replaced him in the White House; Jackie Kennedy Onassis, widow DFK, and others.

According to this version, DFK’s death was not a murder, but a tragic accident. The accidental killer was George Hickey, a secret service agent guarding the president, his family, and senior US officials. He was driving on that fateful November day in a car following the presidential limousine. After the first shot, Oswald Hickey tried to return fire from the AR-15 self-loading rifle that was near him.

Three circumstances proved fatal to the US president. At that moment, the car swayed, and Hicky lost his sight. In addition, he was unfamiliar with such rifles and, it is possible, for the first time he held her in his hands. And, to top it all off, he had walked with his friends all the night before that morning, and his hands were trembling slightly. The bullet fired by Hickey accidentally, naturally, hit the neck of the president who was in front of him.

Of course, the White House was aware of George Hickey’s shot and that it was a fatal accident. By order of Robert Kennedy, the case in order to avoid a grand scandal was hushed up, and all the evidence was destroyed.

November NXX 1 year in South Vietnam there was a military coup. The legitimately chosen government was overthrown, Ngo Din Dim and two brothers were killed. The coup and the killing were organized and conducted by the CIA on the direct order of John F. Kennedy.

If DFK was counting on the gratitude of the Vietnamese, then he miscalculated a lot. This mistake cost him his life. Revenge was quick and cruel. After three weeks in Dallas thundered fatal shots.

Less than 48 hours after the assassination of President Kennedy, Lucier Sarti, a native of Corsica, a hired killer and drug dealer, was detained. On the morning of November 22, he was in Fort Worth, where Kennedy gave a speech near the Texas Hotel, and a few hours later, at the time of the murder, was already in Dallas. The FBI knew very well that this man had been trained in the military camps of one of the foreign armies and that he was wanted by the French authorities for subversive activities against the state. He was a fighter of the notorious SLA, the secret ultra-radical organization of the French military who opposed President de Gaulle. Instead of arresting and interrogating this man, who, according to a number of conspiracy theorists, were hired by the Vietnamese, the FBI secretly took him to Mexico or Canada and released him on all four sides.

Vladimir Kryuchkov advised Cuban comrades to look closely at Oswald. The most important of several meetings took place in Mexico City, where Oswald arrived by bus in September 1963. She went to the garage of the Cuban embassy in Mexico. The American told Fabian Escalante, the future head of Cuban intelligence, and his nephew Anibalu, the son of the former president of the Communist Party of Cuba, who wants to become a "soldier of the revolution." He is ready to prove the seriousness of his intentions ... with the murder of the US President

Although Oswald was not a very reliable person, the Cubans decided not to give up such a chance. Kennedy they considered the main enemy of the Cuban revolution. The head of the American president was priced cheaply - only at 6,5 thousand dollars. The Cubans also promised Oswald refuge on the island of Freedom, but they did not keep the word and left him to the mercy of fate.

The very next day, an FBI officer named Lawrence Keenan set off for the Cuban trail to Mexico City. However, after three days, Hoover, without any explanation, called him back to Washington.

Keenan is confident that Lyndon Johnson insisted on stopping the investigation. He was afraid that an outburst of indignation would force him to attack Cuba, which would inevitably lead to war with the USSR.

“Oswald was a dissident,” says Oscar Marino, a former secret service officer of Cuba, “and he hated his country fiercely ... He offered to kill John Kennedy.” We used it. He was our tool ... "

Marino does not know whether Castro’s signature is on the order to eliminate Kennedy, but Castro and Kennedy were like two duelists who were trying to get rid of each other. Suffice it to say that after the death of his brother, Robert Kennedy tried at least eight times to get revenge on Fidel.