This is the most experienced and most militant special forces in Central Asia. Civil war in 1992 – 1997 became the mechanism of natural selection for the nomination of experienced or born commanders and fighters.


In 1991, the first special unit appeared in Tajikistan - the special battalion of the National Security Committee (at the very beginning - the special forces company of the National Security Committee). At the time of formation, no one especially strictly prescribed the tasks of a new special unit, since its formation was caused by practical, rather than theoretical, necessity — a civil war began in the country. Later, especially after the end of large-scale hostilities, the tasks of the special forces of the National Security Committee were clarified and developed in the governing documents: first of all, this is a forceful opposition to internal terrorism and political banditry, as well as the fight against foreign mercenaries or their terrorists who had been trained abroad. At the same time, the formation received the unofficial name "Alpha", by analogy with the Russian (Soviet) special forces unit that served as an example for the entire post-Soviet space. Only for the period 1997 – 2002. Special Forces BSS conducted combat special operations around 10. For example, during one of such actions in June 2001 in the foothill areas of Dushanbe, together with the country's Interior Ministry, the former field commander and leader of terrorists Rakhmon (“Hitler”) was destroyed, and his group, considered the last major illegal armed formation of remnants irreconcilable Tajik opposition dispersed.

The basis of the MNS special forces, both in the center and in the regions, is made up of fighters who gained real combat experience during the civil war, and also often took part in clashes on the territory of Afghanistan. The main base of the special forces is located in the capital of the republic Dushanbe, however there are also territorial branches, as well as a Special Reserve (having undergone special training or having combat experience, staff members of other BSS units who are on special account and make up a personnel reserve). This allows, if necessary, to increase several times at the expense of notification and collection, or the personnel of the acting special forces, or their number.

In addition to the Tajik Alpha, during the period of hostilities, there was a Special Regiment of the National Security Committee. The most honored and prepared unit of the Special Forces of the Ministry of Internal Affairs, and, perhaps, of the whole of Tajikistan, is the special task unit of the Ministry of Internal Affairs, which until recently was commanded by Major General Sukhrob Kasimov (resigned in February 2007). The special unit is quartered in the Varzob gorge, where the country government residence is located. The brigade staff consists of four linear battalions (operational battalion, special purpose battalion, motorized rifle battalion and road patrol battalion), as well as a helicopter squad and formations of various purposes: a detachment of ski shooters and a detachment of mountain rangers, reconnaissance. The brigade also has mortar and artillery units and support units. In addition to the personal and heavy infantry customary for the special forces weapons are the main combat Tanks, Infantry fighting vehicles, armored personnel carriers (Soviet and Russian models), mortars and artillery. Most of the officers are graduates of Soviet and Russian military schools, about half have experience in the Tajik civil, Soviet-Afghan or Afghan civil wars.

Sukhrob Kasimov himself is a very colorful personality. It is believed that he belongs to the Dangara part of the Kulyab clan. Before the civil war, Kasimov studied at the NK Pedagogical Institute. Krupskaya (Moscow), and during the war he proved himself and advanced as a major field commander.

Like many security officials in the country, Kasymov had extrabudgetary sources of funding: in particular, he was credited with controlling the Orient Bank, the Moscow Cement Plant and a number of retail chains. Opponents of Kasymov tried to blame him for the actions of his subordinates: for example, in 2000, during the special event “Order”, more than 100 servicemen of the brigade were arrested for allegedly absence from the unit and criminal proceedings were instituted. He was accused of attempting to assassinate the mayor of Dushanbe, Ubaidulloyev, who belonged to the Parhar branch of the Kulyab clan. Kasimov was not afraid to argue even with the president, in particular in 1998, he spoke in favor of negotiating with the rebellious colonel Mahmud Khudoiberdiyev.

Khudoiberdiyev is another typical and colorful figure of Tajik special forces. Ethnic Uzbek, who served in the Soviet army to the rank of captain, became a hero during heavy fighting with the Islamists in one of the most intense periods of confrontation in 1993. His separate rapid-response team was considered a reliable stronghold of the secular regime - the elite of the armed forces. However, in 1996 a riot occurred in the brigade, its fighters headed by their commander refused to obey Rakhmonov. Blocked by government units, Khudoiberdiyev’s special forces, after long negotiations, were pacified and re-entered the Ministry of Defense. Almost immediately, the brigade was deployed to fight the troops of irreconcilable Islamists in the Vakhsh valley. But in 1997, the fighters and their commander again decided that they had been deceived, and again turned their weapons against the government. This time the special forces chose Dushanbe as their target, threatening to overthrow Rakhmonov, but on the way was blocked in Kurgan-Tyube by the army and special forces of the KNB Operational Regiment. After a long battle, the rebellious special forces were defeated, and Khudoiberdyev himself disappeared into the mountains along with a small detachment. The authorities, Colonel Khudoyberdyev was wanted, and his elite brigade was disbanded. On the basis of the remnants of the brigade and the representatives of the Uzbek community in the border areas of Tajikistan who were dissatisfied with the central power, Khudoiberdiyev formed a new detachment. In 1998, he captured for a while the large city of Khojent (according to some data, to seize a large amount of money that came to one of the drug groups), but was defeated and, to escape, crossed the border with the closest associate of Abdulojonov to Uzbekistan, where allegedly was seen in contacts with local special services.

Tajikistan also has special forces under the anti-drug agency, the Drug Control Agency (DCA). The Agency itself has only about 400 staff, but its special forces work throughout the country, including on the Afghan-Tajik border. At the same time, officers of the AKN, including special units, receive salaries in 2 – 3 times as compared with their counterparts in other security agencies. The bulk of the drug police pay is charged from funds that are earmarked by the UN Office on Drugs and Crime and the so-called “donor countries” from Europe and the USA, and a smaller part comes from the budget of Tajikistan: for long service, for title and rations. Recently, the DCA has adopted the active tactics of mobile task forces (MOG), which include an officer with the investigator, a couple of dog handlers with dogs and a group of special forces to provide power support. Each MOG moves in four cars and is equipped with everything necessary, including communication facilities, which allows MOG to operate autonomously for quite a long time. The Tajik special forces acquired their fame and formidable reputation not only due to training and professionalism, but also largely due to straightforward tactics and cruelty. 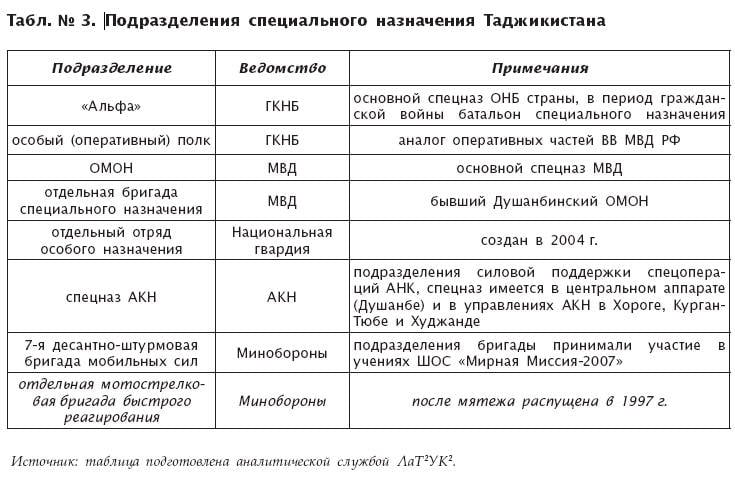 Ctrl Enter
Noticed oshЫbku Highlight text and press. Ctrl + Enter
We are
Already 41 for a year, the Alpha group remains the main anti-terrorist special unit in RussiaRoyal Malaysian Special Forces
19 comments
Information
Dear reader, to leave comments on the publication, you must to register.