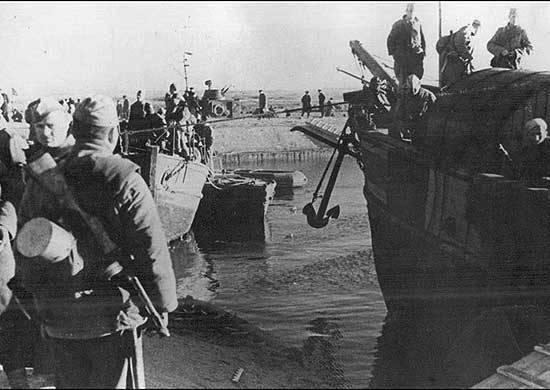 Division of paratroopers before sailing to the shores of the Kerch Strait. November 1943

The purpose of the operation was to create an initial bridgehead on the Kerch Peninsula for the subsequent deployment of military operations to liberate the Crimea together with the troops of the 4th Ukrainian Front. On the Kerch Peninsula, units of the 98th German Infantry, 6th Romanian Cavalry and 3rd Romanian Mountain Rifle Divisions defended, up to 10 separate units and commands of the 17th enemy army. 56 artillery and mortar and 23 anti-aircraft batteries were deployed on the coast. Troops supported aviation 4th air fleet and naval forces.

The plan of the operation was to disembark three rifle divisions of the 56 Army in the northeast and east of Kerch (main line) and one rifle division of the 18 Army (auxiliary line). After the bridgeheads were captured, the troops were to strike in converging directions to seize the eastern part of the Kerch Peninsula with the ports of Kerch and Kamysh-Burun. In accordance with the plan, groups were created for actions on the main and auxiliary lines, which included, in addition to the landing troops, the landing forces — 16 of the detachments of boats and auxiliary vessels, the 2 detachment of artillery support, and the 2 of the cover of various types and 119 auxiliary ships and other vehicles; Artillery and air support forces - 159 guns (caliber 667 mm and more) and 76 rocket launchers, 90 aircraft, 1001 from 612 Air Force (Commander Lieutenant General KA Vershinin) and 4 - fleet aviation ( Commander, Lieutenant-General V.V. Ermachenkov).

Artillery preparation during the landing of the 18 Army (Commander Lieutenant General KN Leselidze) in the Eltigen area continued 15 mines, during which 247 shells spent 8334 shells. The artillery training of the 56 Army (Commander, Lieutenant-General KS Melnik), which continued 23 mines, involved 420 guns and 2 rocket artillery regiment. It also involved the artillery of the 18 Army, attached to strengthen the 56 Army. The aviation of the 4 Air Force suppressed enemy defense targets in the landing area (Dangerous - Fisheries). The enemy’s fire system was only partially suppressed.

On the evening of October 31, landing of landing troops on ships and vessels began. Due to a severe storm, the 56th Army landing could not land on time. The landing force of the 18th army, despite the difficult hydrometeorological conditions, at dawn on November 1, secretly landed in the area of ​​Eltigen. Landing and unloading equipment did not stop even with hurricane fire of the enemy. So, for example, landing craft No. 10 (foreman 2 articles A.A. Elizarov), continuously fired by machine gun and mortar fire and bombarded with grenades, went ashore and landed a unit of the 386th Separate Marine Corps Battalion (BMP) (commander Major N. A. Belyakov). Sailors of the bot team caught enemy grenades flying at him with their hands, throwing them back at the enemy. Marines went on the attack right from the side of the bot, breaking wire fences in the water and on the shore. The paratroopers, successfully repulsing the enemy’s counterattacks, captured a bridgehead up to 5 km along the front and up to 2 km in depth. Due to the simultaneous landing of all three landing groups due to severe storm conditions, the enemy transferred all available reserves of his troops and launched a series of fierce attacks by infantry and tanks. The landing force steadily held the captured bridgehead.

In the landing operation, the landed units of the 318 th rifle division (SD) (commander Col. VF Gladkov) and two battalions of marines supported by a powerful artillery and aviation attack, in 5 hours 1 on November 1943, overcame the strong fire resistance of the enemy and minefields and tied up intense battles for the expansion of the bridgehead seized between the Tobechikskoe and Churubashskoye lakes (in the Eltigen area, south of Kerch). The landing forces, supported by artillery and aviation, successfully repelled numerous enemy counterattacks during the day. Thus, one of the groups of 386 sailors, Major Belyakov’s rider, who seized an anti-tank ditch, repulsed 19 tank attacks for four hours of continuous combat. On the night of 1 on November 2, 3270 people, 4 guns, 9 mortars, 22,7 tons of ammunition and 2 tons of foodstuffs were additionally transported to the Eltigen area. As a result, the landing of the 318 sd (1-th echelon of the troops of the 18-th army) was completed by the morning of November 2. On the bridgehead were about 6 thousand paratroopers. 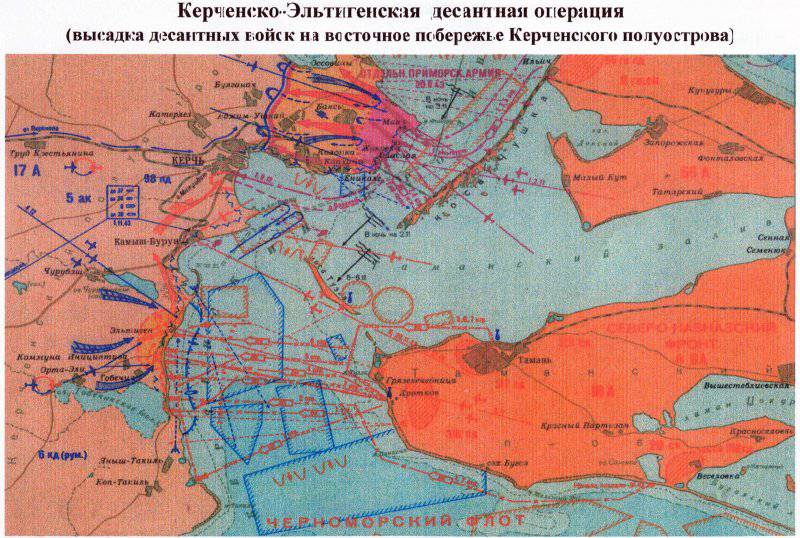 Artillery support of the eltigen landing group, which occupied a limited, through fire of all types weapons bridgehead, was assigned only to the 55 coastal artillery guns of the fleet. This weakening of the artillery support of the Eltigen group significantly reduced the resistance of the landing force of the 18 Army, which conducted continuous heavy battles for 40 days with superior enemy forces. Taking advantage of the fact that the enemy concentrated the main forces to fight the landing of the 18 Army, on the night of November 3, the Azov flotilla successfully landed the troops of the 56 Army northeast of Kerch. 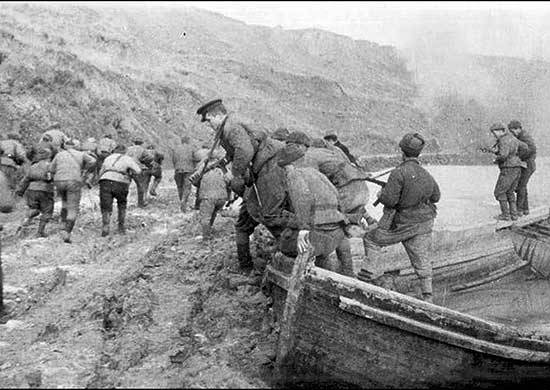 Paratroopers in the bay of Kerch. November 1943 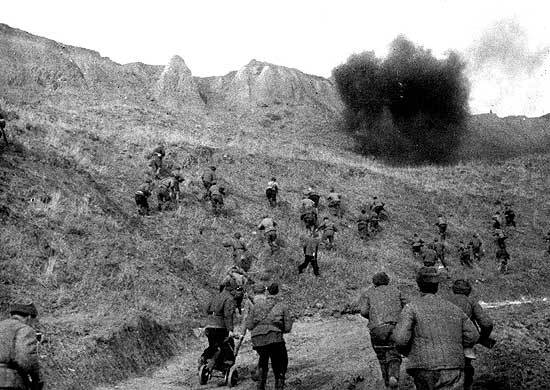 Storm of heights on the approaches to the city of Kerch. November 1943

The landing of the advanced detachment of the 2 airborne group was supported around 200 guns and the rocket artillery regiment of the 56 army. By November 12, the army of this army cleared the enemy’s north-eastern ledge of the Kerch Peninsula and reached Bulganak and the north-eastern outskirts of Kerch, where they went over to the defensive, holding the bridgehead until the beginning of the Crimean operation 1944.

At this time, fierce fighting continued for the bridgehead at Eltigen. Against the paratroopers, the enemy command abandoned infantry units, whose attacks were supported by aircraft and tanks. After long battles in the conditions of an enemy blockade from the sea and air, part of the landing force operating in the Eltigen area received orders from the command to break into the Kerch area to connect with the troops defending north-east of the city. After 40 days, 1700 of weakened 6 paratroopers of December broke through the enemy defenses, secretly forcing the swamp, which the enemy considered impassable, made the 20-kilometer march, reached the southern edge of Kerch and captured the Mithridates mountain. 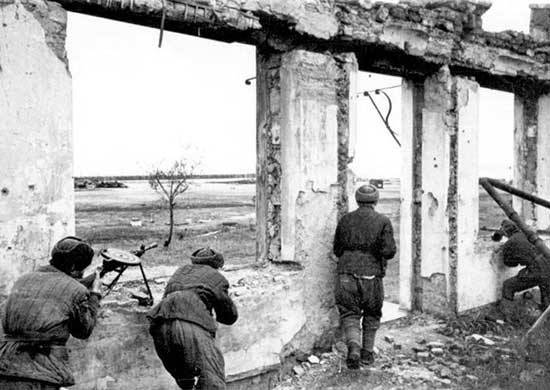 Fighting paratroopers on the outskirts of the city of Kerch. November 1943

The appearance of Soviet troops in Kerch was completely unexpected for the enemy. A panic arose among his troops. The struggle for Kerch could get a more successful development, but the main forces of the landing force did not have time to take advantage of the favorable environment. Given the inability to deliver reinforcements, the Soviet command 10 – 11 December evacuated paratroopers from the southern outskirts of Kerch. As a result of the Kerch-Eltigen landing operation, Soviet troops captured an important operational bridgehead, which later played a major role in the liberation of the Crimea.

Ctrl Enter
Noticed oshЫbku Highlight text and press. Ctrl + Enter
We are
Myths of the Great Patriotic. Papier mache helmet
9 comments
Information
Dear reader, to leave comments on the publication, you must to register.