November 22 2013
2
The BV 222 Wiking is a flying boat equipped with characteristic underwing floats retractable in flight. The development of the Wiking aircraft began in the 1937 year. Initially, this aircraft was designed as an intercontinental flying boat capable of carrying out commercial traffic between Berlin and New York with 16 passengers, or carrying up to 24 passengers on shorter routes. Already at the design stage, the car was converted into a marine intelligence officer (later the Viking became the largest seaplane of the Second World War). 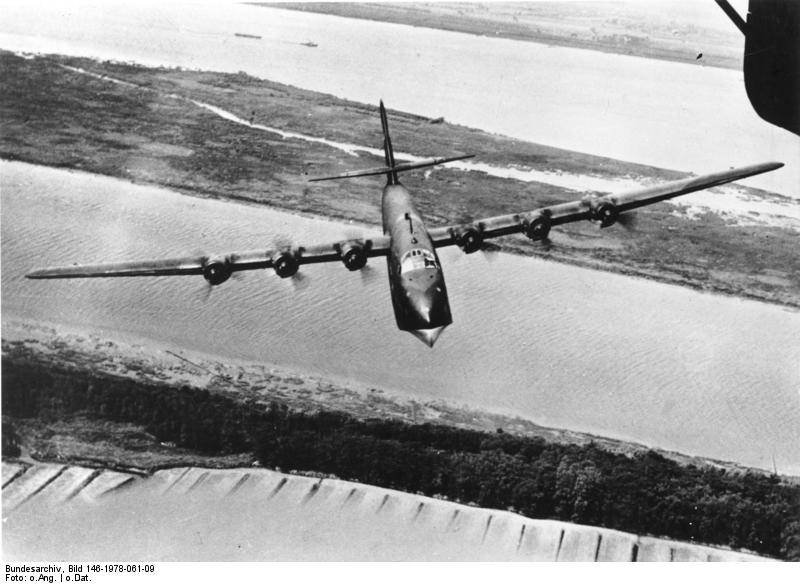 At the end of 1936, Lufthansa Airlines formulated the requirements for a large flying boat intended for passenger traffic on transatlantic routes. In May 1937, the Heinkel and Blom and Foss firms prepared the projects Non-120 and Na-222, respectively. In September, the last project “Blom and Foss”, developed under the leadership of R. Vogt, was recognized the winner of the competition. The aircraft presented for the competition was a six-engine all-metal flying boat, which was distinguished by a rather large elongation: the ratio of length and width was 8,4 (for most flying boats produced at that time, this parameter was about six). Underwing stabilizing floats were retractable. The power plant is six Bramo 9R-323 six-cylinder star-shaped air-cooled air-cooled engines. Lufthansa Airlines ordered three aircraft, but by the beginning of World War II they were still under construction.

The project had several notable features. For example, a large free floor area by increasing the widest part of the fuselage to 3,05 m and the absence of intermediate walls above the floor level. The main element of the wing was a sealed caisson, at the same time serving to accommodate oil and fuel tanks (this was a characteristic feature of all Vogt projects). Under the wing were installed stabilizing floats, consisting of two halves, each of which was removed in the wing.

The control system, which at first glance seemed extraordinary, was partly manual, and partly performed on servo drives. Each aileron was divided into two sections. The larger inner section was controlled manually using a servo trimmer, the outer section was controlled by a servo drive, however the trimmer of the latter was controlled manually using hard wiring. The patented “tamper balancing” was provided with two special sections. profile, creating additional lift during the deflection of the aileron. Each elevator was divided into three sections. Extreme drive was an electric motor. Also this section was used as a trimmer. The central section with the steering wheel was not connected and was used only by autopilot or was disconnected freely by feathering. Had a trimmer with servo control. Steering rudder with two interconnected trimmers was carried out from the steering wheel.

The all-metal wing had a 1,5-m tubular spar, which was divided by partitions into six 3450 liter fuel tanks and was placed on the 30% chord. Motors, welded from steel pipes, carried six engines. The straight center section carried the electric flaps. Access to the engines during the flight was provided by manholes in the main spar. The all-metal two-part housing was covered with a 3-5-mm corrosion-resistant lining. The hull had two decks, of which the lower one was passenger. The crew included: two pilots, two engineers, a radio operator and a navigator.

In September, with the start of hostilities 1939, some specialists were transferred to the ВV.138 program, however, work on three flying boats for the Lufthansa was not completed. The Lufthansa Commission of 16 July 1940 of the year carried out an inspection of the interior layout, although it became clear that these planes on the airlines are unlikely to arrive. The first V.222 V1 was finished in August 1940 of the year, and already on September 7 it took off for the first time. The machine was driven by a fleet captain Helmut Vaz Rodig. The duration of the first flight was 20 minutes, and on the whole he was recognized as satisfactory. On all axes, the boat was controlled well, but the pilot noted a slight instability on the course. During the taxiing on the water, the Viking showed a tendency to goat.

Flight tests were conducted throughout the autumn and half of winter, due to freezing on the Elbe, they were interrupted for the period from December to February. In the spring were scheduled long-haul flights. The Luftwaffe received a proposal to make these flights for the transport of goods, and the developer company agreed to upgrade the aircraft. The cargo hatches were cut through and the interior for receiving goods was altered. The car was marked with signs of the Luftwaffe, and the civil registration was replaced with the call sign SS + EQ. The first flight of the BV.222V1 in the interests of the Luftwaffe made 10 July 1941. By August 19 the plane performed seven flights between Kirkenes and Hamburg. About 30 thousand km were covered, 221 injured were evacuated and 65 tons of cargo delivered.

From 10 September 1941 of the year ВV.222 V1, after prophylaxis at Finkenwerder, resumed flights. This time the plane went to Athens. From there he flew to Libya. However, the boat was soon returned to the factory for maintenance. During the flights of Athens and Dernaya, at a height of 4,5 km, the maximum speed of 382 km / h was recorded. The estimated maximum flight distance was 7 thousand. Km. The aircraft contained 92 fully equipped soldiers or 72 wounded.

V.222 V1 did not have defensive armament and, as a rule, was accompanied by two Bf.110. But sometimes escort planes were late, and the flying boat flew without a cover. A single boat during one of these flights intercepted two British "Beaufighter", but did not attack the "Viking". In November, 1941, the machine returned to the factory to install defensive weapons. The MG-81 machine gun was installed in the nose in the nose, the MG-131 machine guns were installed in the rear and front turrets, and the four MG-81 machine guns in the side windows. 7 August 1941, the second experienced VV.222 V2, and 28 November 1941, VV.222 V3, began flight tests. At the plant in Finkenwerder were laid new aircraft.

V2 was sent to the Atlantic Air Command. The plane was supposed to be used for implementation in the interests of undersea long-range intelligence. The aircraft received the same defensive armament as the V1. In addition, it was planned to install four MG-131 between the outer pair of engines under the wings in the two gondolas. Machine guns were installed in the nose and tail of the gondolas. Since the tests in Travemünde showed an increase in resistance, these two gondolas were abandoned.

Other changes to the results of these tests included the installation immediately after the main 5 additional redans. Rear got a wedge shape. Several strengthened the design of the wing. V.222 V2 was originally used in the transport version. From the very beginning the third car was made in the transport variant. Only one MG-81 machine gun was installed in the nose.

The low-volume production of the BV 222 was started at Finkenwerder at the Blom & Foss plant at the end of the 1942 year. Aircraft BV 222 Wiking in service in Germany actually consisted since July 1941, but it was formally accepted in December 1941. 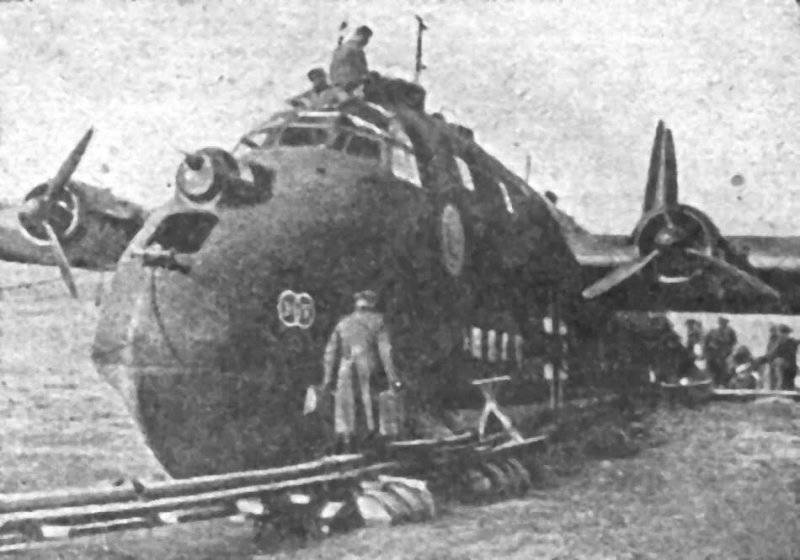 Modifications of the flying boat BV 222:

At the beginning of 1941, additional BV.222 were laid. These planes were planned to be used as scouts and transport planes. The first batch of 5 flying boats had to be equipped with engines Bramo 323R-2 Fafnir. These machines were considered as aircraft of the A series, although they had queen numbers. The fourth car of this series (V.222 V7) was altered under the diesel. It was supposed to serve as a prototype for the C series.

In the period from April 20 to October 26 1942, the Luftwaffe received aircraft V4, V5, V6, V8. They had a reinforced structure. The aircraft were armed and used as transport aircraft. V4 and V5 became part of the “Air Traffic Squadron C” and were transferred to the See 222 squadron in the Mediterranean. These aircraft with two pre-production aircraft were used to support the African corps from bases in Greece and Italy. Landings took place in Derna and Tobruk; returned with the wounded. The V6 and V8 aircraft also entered the LTS S and 222 were shot down by the British in the 1942 year.

In one of the operations BV.222, V4 was seriously damaged, and V8 was destroyed. The damaged aircraft was returned to Blom und Voss for repair. A more powerful defensive armament was installed on the machine, and the design was again strengthened. In February, 1943, the V1 crashed. The remaining V.222 Wikings were returned to Germany for modernization and repair, and the V2 and V5 were transferred to Travemünde Lufthanssee-Werft.

The new defensive armament included the MG-151 gun mounted in the front upper turret and the turret behind the engine gondolas. The MG-131 machine gun was placed in the nose window, and two MG-81 in the rear windows. Engines equipped with a water-alcohol mixture injection system, which allowed to increase engine power up to HP 1200. The defeat of the German troops in North Africa caused the transfer of all four V.222 to the command of the Atlantic. Seaplanes equipped search locators and additional radio equipment. The radio equipment included FuG 200 Hohenteville, FuG 16Z radio stations (positioning was implemented) and FuG 25a, as well as the FuG 101 radio altimeter. FuG 302 beacons Schwan could carry ETC 501 bomb racks.

Bv-222B - The civil model, which was never launched into production. This transport modification could take on board up to 92 passengers. 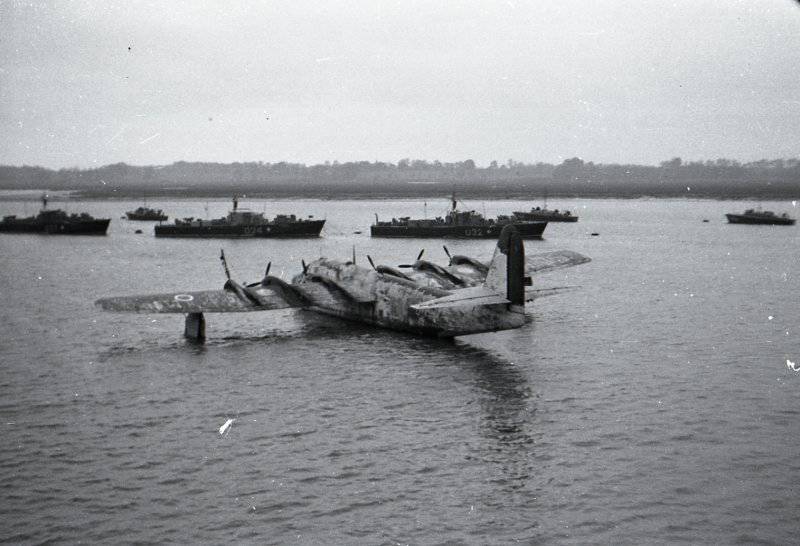 The design of this modification as a whole repeated the series A aircraft. The main purpose is long-range reconnaissance. Fuel supply has been reduced: each of the tanks contained 2870 l. Instead of one 480 l and six 86 l oil tanks, six tanks with a capacity of 172 l were installed. The defensive armament changed: a MG-131 machine gun was installed in the nose, an additional MG-131 was installed in the nose window, MG-81 was replaced in the rear windows with the same machine guns. The wing towers moved to the end of the middle engine nacelles. Normal take-off weight increased to 46 tons, and maximum - to 49 tons. As a result, the power of the Jumo 207C engines for a normal take-off was not enough. The installation under the wing of four launch solid-fuel missiles was envisaged. The stabilizing floats were redesigned: they were removed at a speed of 225 km / h in 20 seconds. The crew, as a rule, consisted of 11 people: two pilots, two engineers, a navigator, a radio operator and five shooters.

At the beginning of the year 1944 the plane was taken out of production. This boat as a transport operation until the end of the war.

By the end of the war, four BV-222A Wikings survived, one of which was delivered to the Kelshot base of the British Royal Air Force and enlisted in the 201 squadron. Two more aircraft were captured by US troops and subsequently transferred to the United States.

Ctrl Enter
Noticed oshЫbku Highlight text and press. Ctrl + Enter
We are
Devil's Dozen "Viking"An-12 in Afghanistan
2 comments
Information
Dear reader, to leave comments on the publication, you must to register.