Vladimir Putin: “Our task is to make Russian literature, Russian a powerful factor in the ideological influence of Russia in the world” 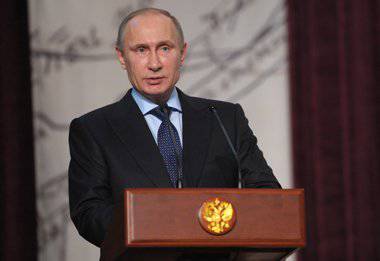 The President of the country spoke to the participants of the Russian Literary Assembly.


A meeting of the country's literary community took place at the Moscow University of Friendship of Peoples, bringing together over five hundred writers, poets, publicists, book publishers, literary critics and translators, teachers of literature, museum and library workers, theater workers of Russia, and countries of the near and far abroad. Russian President Vladimir Putin, who opened the meeting, gave a speech in which he outlined the attitude of the state to such a comprehensive phenomenon as literature, gave an assessment of its current state and placed emphasis on its role in society.

At the same time, the head of state noted with dismay the decline of interest in the book in Russia, especially among young people: “Our country, which is once the most read in the world, can no longer claim this honorary title. According to statistics, Russian citizens devote to reading books on average only 9 minutes per day. ”

The fact that literature has ceased to play an important role in the life of society is also indicated by the fall in the level of general culture, the president noted with regret. There is a shift, distortion of values ​​and impoverishment of the modern spoken language.

This situation needs to be corrected, Vladimir Putin firmly declared. As a priority measure, he proposed to revise the programs of teaching literature and the Russian language, especially in high school: today these subjects have little time, disproportionate to their importance.
According to the president, it is necessary to instill a taste for reading not only through time-tested classics, but also introducing young readers with new names and new characters. To this end, the support of contemporary authors is needed, and it is already being implemented - for example, with the help of a presidential award in the field of literature and art for works for children and young people. It should also be given the national status of the national reading support program.

“Of course, in the modern world, the question may arise: why, in general, should the market do this, and so will everything regulate?”, Vladimir Putin addressed those present. And he himself retorted: “But, probably, this is an area that the market certainly does not regulate, in any case, properly. The state must also maintain the literature because it is in it that the strongest, most accurate diagnosis of the state of society is always made and its pain points are designated. ”

Touching upon the role of the Russian language as a mighty unifying factor for the multinational people of Russia, the head of state urged to intensify the process of translating into Russian the best authors working in national languages.

In conclusion of his speech, Vladimir Putin spoke about the more important mission of Russian literature. The President formulated the task “to make Russian literature, Russian a powerful factor in the ideological influence of Russia in the world.” At the same time, an environment should be formed inside the country in which education, erudition, and knowledge of literary classics and modern literature will become the rule of good taste.

To achieve the goals, it is necessary to concentrate on solving current problems in the literary field. First of all, to create conditions for the writers' creativity and revival of the traditions of literary criticism, to develop a balanced publishing policy, and also to more actively use the possibilities of libraries, literary museums, memorial houses of writers.

Ctrl Enter
Noticed oshЫbku Highlight text and press. Ctrl + Enter
We are
Language and politics. Russian language space is shrinking from year to year.On the other side of the “red” and “white”. Izborsk Club Report
61 comment
Information
Dear reader, to leave comments on the publication, you must to register.