Provocative "Symbol of the Sun" on the ice of Riga, or Nazi-representation before hockey

November 22 2013
265
One of the matches of the Continental Hockey League - the match between Dynamo Riga and the Ugra team from Khanty-Mansiysk was marked by a scandalous incident. More specifically, this glaring case did not occur during the match itself, but before it began. The organizers of the hockey meeting decided in a peculiar way to greet the guests and link the opening ceremony of the meeting with the 95 anniversary of the appearance on the world map of the Latvian Republic. Young boys and girls in costumes carried on the ice arena a few cloths in the colors of the national flag, with which they danced for several minutes. On the last chords of the musical accompaniment of this “dance” from the cloths, a figure suddenly formed, which, by its form, was very similar to the swastika. Moreover, it was precisely on the appearance of this figure that the organizers of the show placed the main emphasis, characteristically highlighting it with searchlights. Many fans, who during the “dance” applauded the speakers, realizing that the symbol “flaunts” in front of them on the ice arena, changed the applause with a whistle. The beginning and the course of the match did not stop. 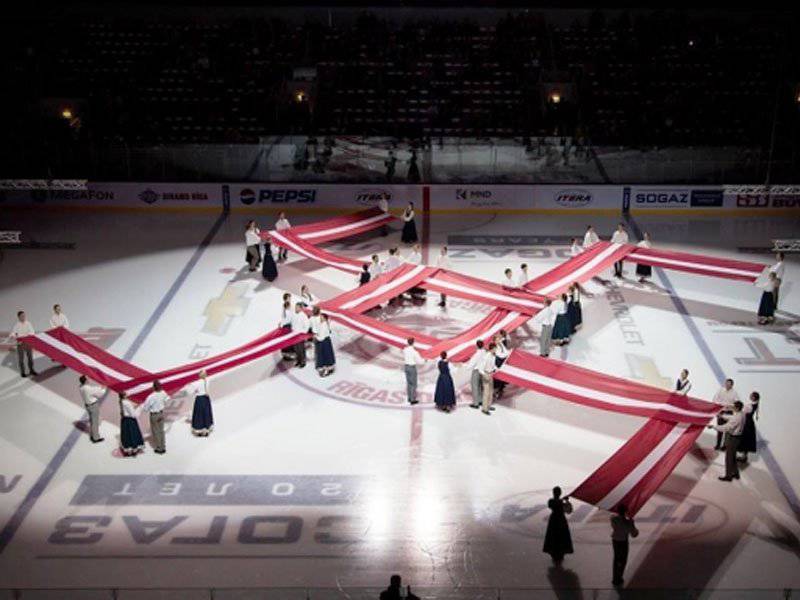 The main discussion about what happened in Riga began after the end of the meeting, in which the victory was celebrated by Latvian hockey players. The main question was asked the leaders of the KHL. The question is, how could it ever turn out that the presentation before the start of a sporting event included such a provocative element, obviously not capable of embellishing either the performance itself or the hockey match.

The KHL leadership decided to sort out this issue. An entire league special commission was created. Understood, admittedly, not for long. A short time after the incident, Vladimir Shalaev (vice-president of the KHL) spoke out:

The commission has finished working. We did not find anything criminal. There is such a good saying: "Let me pull one phrase out of the Bible, and I will prove that the author should be hanged." Here is exactly the same situation. The commission worked fruitfully, requested all materials, attracted specialists in heraldry - there is nothing there.
The words were published by the publication "Soviet Sport".

The original conclusion ... Even more original in this situation should be considered Dmitry Kurbatov - Director of the organization and conduct of the KHL matches. Kurbatov, commenting on the situation with the appearance of the swastika during the opening ceremony of the match, said he did not see anything reprehensible. According to him, the symbol that appeared in the course of the “show” could simply “randomly form”, and the photographer captured it right there. They say that there was nothing similar in the script of the action, but simply random perturbations of artists with flags on the ice and gave rise to this symbol, which made, to put it mildly, bewilder the fans and not only the fans. It turns out that the accented searchlight illumination of the symbol “similar to the swastika” worked by pure chance ...

Meanwhile, representatives of the Riga hockey club Dynamo stated that it was not an accident that everything was written in the script, but there was no talk of a swastika. So what appeared on the ice arena in Riga? The official site of the Continental Hockey League is trying to give us an answer to this question:

The Continental Hockey League promptly conducted an investigation - an explanation was requested and received from Dinamo Riga (Riga), photo and video materials were studied, and a heraldry specialist's opinion was received.

Summarizing the information received, the KHL gives an official assessment of the situation. The match between Dynamo and Ugra was held on the eve of the state holiday of the Republic of Latvia - Independence Day, and the pre-match show was based on the use of Latvian national symbols and ornaments. Among them is the so-called "Symbol of the Sun" (Saules zime), whose image symbolizes the desire for good and happiness. That is the meaning, according to the organizers, was invested in the pre-match show. The hockey club Dynamo (Riga) expressed regret that the feelings of a considerable number of hockey fans were offended. The KHL believes that the formation of the “Symbol of the Sun”, which is an element of the spiritual heritage, is not related to the Nazi ideology, but is the use of traditional symbols and ornaments of the Latvian people.

And an interesting ending to the note:

At the same time, the KHL notes that, given the possibility of the appearance of obvious associations, the organizers of the show should refrain from displaying such symbols when holding international matches.

And indeed, the order, it turns out, is not enough. Even if we assume that the Latvian host has decided to show the guests of the ceremony its purely national “pattern”, which does not symbolize anything other than sun, goodness and happiness, then any functionary (and not only a functionary) who is ready to lay out the fascist can say the same thing. the swastika is already without any variations. Why? Let him say that these are all your conjectures, that no one is a symbol of fascism and Nazism (hakenkreuz), but only a symbol of the luminary.

Yes, indeed - a symbol of the luminary, a wish for well-being and good luck, an ornament of creation, but at least let’s Latvian Saules zime. But all this was up to the moment when this more than peaceful symbol found itself on the flag of Nazi Germany. Until the moment when millions of people began to be killed under this banner, dropped bombs on sleeping cities and exterminate entire nations. Since then, the very perception of this symbol has changed. Any normal person who is well aware of the horror that has descended on the planet since the beginning of the Second World War cannot, by definition, be associated with anything else. And such a person can at least a thousand times be accused of not being familiar with Latvian styles and ornaments, so that they don’t understand anything in Sanskrit messages (swastika from Sanskrit. “Swasti” - greeting), but in his worldview attitude to this symbol will not change.

However, the Latvian side seems to be aware of this and is not trying. The other day, the press secretary of the Latvian Ice Hockey Federation, Maris Gorbunovs, said that he did not see anything reprehensible in the appearance of this symbol on the Arena-Riga hockey ground:

This sign is one of the mythological symbols of Latvia, so I do not see anything criminal in this. If you take a closer look at the production, then it is clear that the swastika looks different - her “legs” go the other way.
“Legs to the other side” is a serious and reasoned explanation ...

It is noteworthy that 7 years ago, Latvia has already tried to promote its Saules zime. Then the Latvian organizers decided to “please” their partners from the West. At the NATO summit, held in 2006 in the year in Riga, the Latvian authorities offered guests gift sets in which were mittens with the image of the same "Sun Symbol". Then it almost came to a great scandal: when the summit guests learned about such a gift, many openly declared that they could not take it, specifying the reason. Now, Latvia seems to have again decided to remind of its ambiguously perceived symbols by the public, having decided to use them at a sports festival.

Similar "Symbols of the Sun", sadly, but appear now at sports competitions not only in Latvia. Not so long ago, in Yaroslavl, a flag with a swastika appeared on one of the stands, hung out by one ... well, it's difficult to call a fan of this “hero”. For such a wild trick, a young man (born 1989) was “mercilessly” punished: as many as seven days of arrest for “propaganda and public demonstration of Nazi paraphernalia”. Whole seven days! .. Surprisingly, according to our laws, nothing more than a resident of the Vladimir region, who was a new follower of the “Fuhrer” ideas, did not shine. From the article 20.3 p.1 COAP:

In general, the punishment looks just strange - in fact, nothing and does not prevent anyone from walking around with the attributes of Nazism, having a couple thousand in his pocket in case of detention and a fine. So one can be surprised for a long time about the blatant provocation of the Latvian side, but we shouldn’t forget about ourselves either ... Our grandfathers and great-grandfathers, who won us the Victory in that Great War, look at us from old photos with silent reproach.

Ctrl Enter
Noticed oshЫbku Highlight text and press. Ctrl + Enter
We are
Zakharchenko in Debaltseve: "This city for us is a symbol of resilience, a symbol of struggle"Results of the week. "It is not that fever, that is the center of gravity"
265 comments
Information
Dear reader, to leave comments on the publication, you must to register.