November 25 2013
7
19 November in Beirut there was a bloody terrorist attack: a man came up to the Iranian embassy on a motorcycle, with whom the guards immediately began talking. They stopped a suspicious stranger - and he brought the explosives in the belt into action. Following this terrorist, the 4х4 jeep, filled with TNT in the literal sense of the word, attempted to break into the Iranian embassy: it was estimated that there were up to one hundred kilograms of explosive there. According to official figures, two explosions killed two employees of the Iranian embassy and a 23 man in the vicinity. Another approximately 150 people were injured. 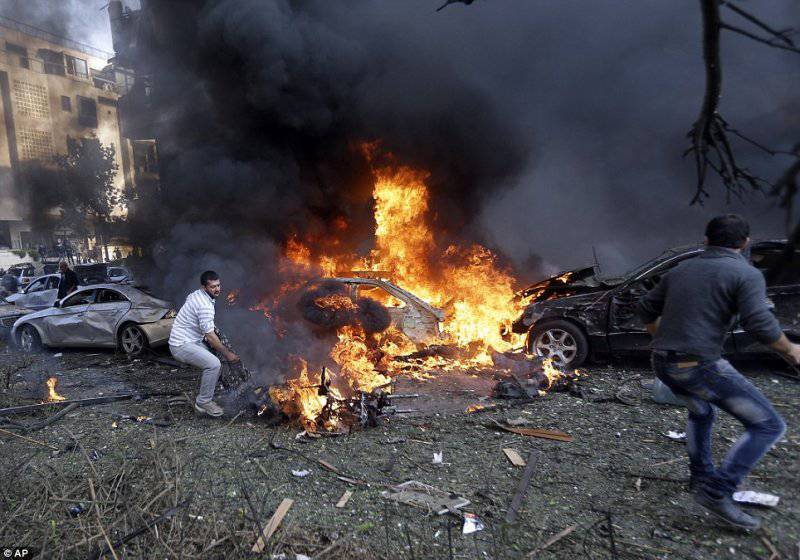 On the same day, charges were heard. Channel “Al Jazeera” reported that the Iranian ambassador in Beirut accused Israel of organizing a double terrorist attack. Then, the Iranian Foreign Ministry spokesman also blamed Israel, the portal reported MIGnews.com. "This attack is the result of the inhuman activities of the Zionist enemy," the spokesman said.

Later it turned out that the prosecutors with the conclusions were rushed.

Responsibility for a double explosion at the Iranian embassy in Beirut took over the Sunni group "Brigades of Abdullah Azzam". This was reported "Lenta.ru" with reference to France-Presse. The statement of the terrorists said that the attacks against Iran and Hezbollah will continue as long as they help Bashar Assad to fight against the Sunni uprising in his country.

As Lenta reminds, the Abdullah Azzam Brigade group, founded in 2009, is considered to be associated with Al-Qaeda. There are branches in several Islamic countries. The base is Lebanon.

Analysts immediately began to write that everything is clear: the Syrian war moves to Lebanon. Al-Qaida is defeated after defeat in Syria - from the Assad army, from the Kurdish militia, and from the Hezbollah fighters.

An eyewitness to the tragedy, a representative of the Hezbollah faction in the Lebanese parliament Hassan Yacoub told "Voice of Russia":

“An extremist group linked to al-Qaeda has claimed responsibility for the blast. I think this is another attempt to move the Syrian war to Lebanon, which extremists are losing. In addition, we regard this terrorist act as revenge on Iran for trying to constructively solve the Iranian nuclear problem. ”

It turns out that the strike was addressed to Hezbollah and Assad - after all, the explosions thundered outside the Iranian embassy, ​​a Syrian ally. If you look through the slightly yellowed tapes news, then you can stumble upon reports of recent clashes (some of them reached the scale of local battles) between the Lebanese Sunni radicals and the Lebanese Shiites. The latter are on the side of Bashar Assad.

The explosion at the Iranian embassy was so strong, journalists write, that a fire engulfed the cars standing outside the embassy. Facades of several buildings collapsed. Asphalt was covered with broken glass as a carpet. The streets were bloody, and the embassy had charred bodies. Some trees were uprooted by the blast wave. The embassy building itself, being well fortified, suffered relatively little.

In the meantime, the Abdulla Azzam Brigade group claimed responsibility for the double attack. Through Twitter, Sheikh Sirajeddine Zuraiqat, the religious leader of the Brigade, declared that the group had launched an attack. Sheikh called the martyrs who participated in the attack as “martyrs” and “Sunni heroes of Lebanon.”

South Beirut, the report authors recall, is Hezbollah’s fortress. At the beginning of this year, there were three explosions here. Responsibility was assigned to groups associated with the Syrian rebels, who allegedly avenged the participation of Hezbollah in the civil war on the side of Assad. Hezbollah, the publication reminds, played a decisive role in the success of the Assad army in several key battles, but the participation of militants increased confessional tensions in Syria and Lebanon.

Hezbollah’s official spokesman, Ali Ammar, said the attack would not stop "resistance." The fight against terrorism will continue until the bitter end.

15 members of the UN Security Council and Secretary General Ban Ki-moon strongly condemned the attack. US Secretary of State John Kerry also condemned the "senseless and despicable" act of terrorism and urged all parties to investigate the Beirut bombings. "The United States knows too well the price of terrorism directed against our own diplomats around the world, and after this cruel and unjustified attack, our hearts beat along with the hearts of the Iranian people," he said.

Bjorn Blashke (tagesschau.de) recalls that in the past few weeks, Hezbollah has increased security measures. In the vicinity of Beirut, which controls this movement, patrols were intensified. Although this organization constantly cares about autonomy, this time it called for help from the Lebanese army. In addition, Hezbollah has opened regular checkpoints. These first appeared near strategic buildings. But even on the streets that are of no strategic importance, metal pillars were installed in the asphalt - to prevent the parking of cars full of explosives. Now if an explosion happens, then just by the road. These measures were taken after two summer explosions. Nevertheless, writes a German journalist, all this did not help ...

Reporter Ulrike Putz (Spiegel Online) notes that the Shiite Hezbollah operates essentially as a state within a state. The movement in Lebanon is funded mostly by Iran. Special militia units fighting on the side of the government in the Syrian civil war are paid for and organized by Iran. The current attack shows that Sunni extremists want to repay Hezbollah and Iran for supporting the Bashar Assad regime.

They are afraid of this threat in Lebanon. For many years there were no suicide bombers in the country, the journalist writes. Now they are back, and terrible memories of the civil war in Lebanon woke up with them ...

Currently, the Lebanese authorities are investigating terrorist attacks against the Iranian embassy.

As for the actions of the Assad army and Hezbollah in Syria, their military successes can really infuriate the extremists. The media reported that the Syrian army is beginning a major operation to clean up the rebels of the mountainous region of Kalamoun: the “oppositionists” have long since established supply channels from Lebanon to Damascus suburbs. If government forces and Hezbollah fighters knock out Islamist mercenaries, the only thing left to do in Syria is to raise their legs. It will be just a matter of time, as Syrian military leaders like to repeat. Unless, of course, Saudi Arabia sends an 50-thousand army to Damascus, which, according to some sources, is currently training in Jordan ...


Observed and translated by Oleg Chuvakin
- especially for topwar.ru
Ctrl Enter
Noticed oshЫbku Highlight text and press. Ctrl + Enter
We are
Who blew up Turkey? The explosion in Istanbul and the "wave of terror" on Turkish soilGeopolitical mosaic: supporters of the Syrian "opposition" held in the UN resolution against Assad, and the website "Murder Market" raises money for killers for Obama and Bernanke
7 comments
Information
Dear reader, to leave comments on the publication, you must to register.