What will be the new fleet of Russia 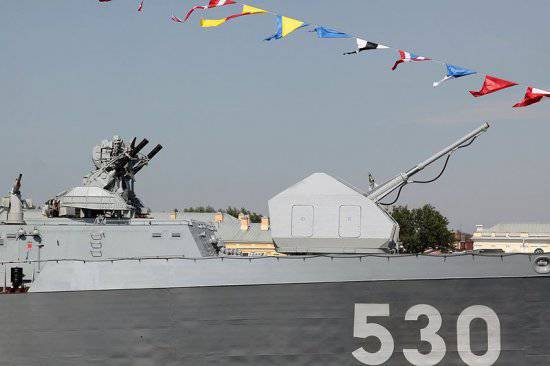 Deputy Minister of Defense Vladimir Popovkin, voicing the details of the formation of the State Armaments Program for 2011 – 2020, outlined the prospects for re-equipping the Russian Navy.

According to him, one can understand that the basis of the program will be a course towards unification, the basis fleet there will be a submarine fleet, primarily nuclear submarines.

Currently, the fleet is going through hard times, most of the ships are actually dying of old age. If you do not start a large-scale update of the Navy right now, then after 10-20 years (depending on whether the ships will be serviced normally), the Russian Federation will remain even without what it is now, the last Soviet-era titans will be written off. The Russian Federation will have, at the most, a detachment of ships in every direction - the Black, Baltic Seas, the Arctic and Pacific Oceans. That is, the maximum that the Navy can do is to frighten poachers, to catch smugglers. To protect the sea borders of the Russian Federation, the Russian coast, to perform tasks in the ocean, the Navy will not.

In fact, the time before the 2020 year is the years when it is necessary to create the backbone of the new fleet, which will replace the outgoing fleet from the Soviet era. If over the years nothing is done, or only part of the program is completed, the armed forces of the Russian Federation will in fact lose the maritime component.

Moreover, it is impossible to build everything, it is necessary to create the core of the fleet, systematically laying the whole series of ships. Judging by the details voiced by the State Armaments Program for 2011 – 2020, today the main trend of the Russian Navy’s development is the maximum unification of new ship and submarine projects, achieved through the use of standardized power plants, weapon systems, combat information control systems, electronic weapons, and so on dd

Such an approach, adopted by all leading maritime powers, should reduce the cost, simplify and, as a result, speed up the construction of the fleet, and further facilitate its provision and maintenance in combat readiness, will allow to overcome the negative tendencies that occurred during Soviet times in the near future.

It will be done away with the irrational variety of projects of warships designed to carry out close missions, the ships will be unified and will be able to perform the widest range of combat missions - air defense, anti-submarine warfare, fight against enemy ships, support for land forces from the sea.

It should be noted that a similar approach was created in the 80-s in the USSR, it was then that they began to develop advanced weapons and equipment, which will now be used on new warships of the Russian Navy. Presumably, if it were not for the collapse of the USSR, then such ships would have begun to be built en masse as far back as the 90s.

The submarine fleet will remain the basis of the Russian Navy. First of all, we are talking about the nuclear fleet - with ICBMs, multi-purpose submarines.

Before 2020, the 8 submarine of the 955 project with the Bulava missiles must enter the fleet. These submarine missile carriers with more than 700 nuclear warheads will form the basis of Russian strategic nuclear forces for the next few decades.

The basis of the atomic multipurpose fleet will be the submarines of the 885 "Ash" submarine. The head boat of this type “Severodvinsk” was launched in summer 2010 of the year. These very expensive but powerful nuclear submarines should replace three types of submarines in the coming 15 years - the 671, 945 and 949 projects of Soviet construction (total 15 units). At present, another submarine of the project "Ash" is being built in shipyards, in 2011-2018. 6 "Ash" will be laid, even 2025-2 "Ash" can be built before 4. The project is very expensive and complicated, but there is simply no time to create a simpler and cheaper submarine. Therefore, the construction of "Ash" will continue in parallel with their improvement.

The basis of the diesel fleet will be advanced versions of the famous "Varshavyanka" - a submarine of the 636M project. The head boat of this type for the Black Sea Fleet was laid in August 2010 of the year. They will replace the old "Varshavyanka".

There is another project 677 "Lada". The head submarine of this project, St. Petersburg, which was launched back in 2004, became part of the Navy only after 6 years. According to available information, the main problems of these submarines are in the sonar equipment and power plant. Therefore, we decided not to take risks and build modernized Varshavyanka, the fleet needs submarines right now. But the refinement of the project "Lada" will continue. Diesel Submarines plan to build approximately 10 units before the 2020 year.

The surface fleet needs to be replaced almost all of the old ships about 90%. Only a small part of the ships can be upgraded with a prolonged service life.

The command of the Armed Forces, apparently, decided not to take risks and begin to restore the Navy from the simplest ships (small and relatively cheap), and then move on to larger, more complex and expensive combat units. So, the corvette of the project 20380 "Steregushchy" entered into service, the 1 th corvette was launched, another 3 corvette was laid. It is planned to build 35 units in ten years.

Following the corvettes, the construction of ships of the ocean zone began - these are the frigates of the 22350 project, the first domestic large ships built in the post-Soviet era. The main ship of the project, the Admiral of the Fleet of the Soviet Union Gorshkov, was laid down on 1 February 2006 at the St. Petersburg shipbuilding enterprise Severnaya Verf, launched on October 29 2010. In total, it is proposed to build and build 10-12 units before the 2020 year. But the construction is delayed, so it was decided to build in parallel with the new frigates a series of 11356 project ships already mastered by the domestic industry on export orders for India. They should be unified with the ships of the new generation in terms of equipment and main weapon systems, which will reduce the differences between them to a minimum. It is assumed that in the coming 10 years, the order of 5-6-te ships of the 11356 project should be commissioned.

After the frigates and corvettes will build more powerful ships - destroyers of the new generation. A project of a ship with a displacement of about 10 000 tons is being created, it is also supposed to be equipped with uniform launchers, a standard combat information-control system and other standardized equipment for the entire surface fleet.

At the same time, all surface ships and atomic multi-purpose submarines will have to be unified in terms of the main armament, which in the near future will be the Kaliber integrated ship-based missile system, using weapons of various types and purpose.

Together with destroyers will build universal landing ships. If a political decision is made, this is the core of the fleet, from nuclear submarines, naval submarines, corvettes, frigates, destroyers, landing ships, will be enhanced by upgrading heavy missile cruisers and creating new Russian aircraft carriers. 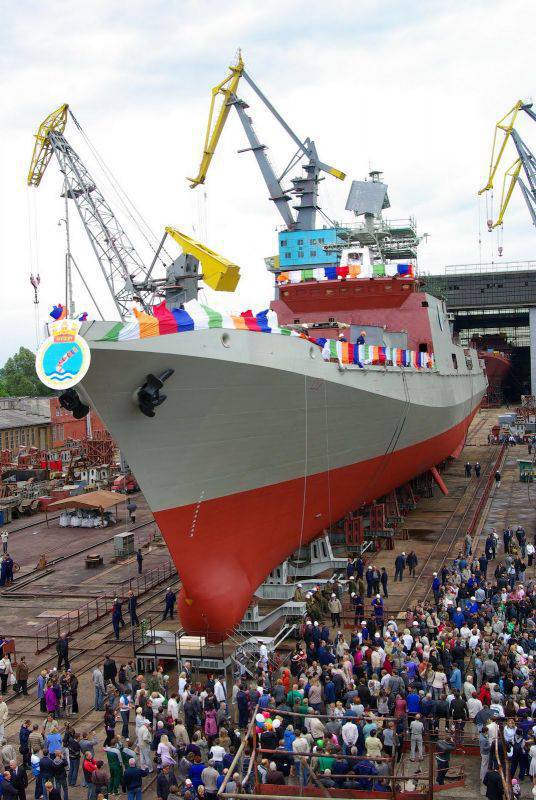 In total, they plan to put into operation an 4 ship of this type. At the same time, together with the ships, the French will supply us with modern control and navigation systems that interest both the Russian military and the military-industrial complex representatives.

The ships will be used not only as amphibious assault ships or helicopter carriers, but also as command and staff ships that carry out the command and control, distribute targets between subordinate combat units, and coordinate their actions in real time. Russian helicopters will be placed on them, to ensure the possibility of operations in the northern latitudes, the project will be finalized. These ships will increase the capabilities of the Russian Navy to conduct combat operations under the concept of "fleet against the coast." The Soviet fleet developed under the concept of "fleet against fleet", this was its definite failure. Only in 80-ies began the design of the UDC of the 11780 project, which in its capabilities was close to its American counterparts.

Such ships are also necessary for conducting operations against pirates, for carrying out rescue operations, for example, for the removal of its citizens from another country.

The plans for fleet renewal adopted by the leadership of the country and the Armed Forces as a whole are reasonable and realistic and have all the chances for successful implementation.

But there is one “but” - 20 years of devastation and total theft laid out managers of all levels, from foremen at enterprises to heads of industries. In order to force dismissed people to make a Case of strategic importance - the survival of our Motherland and people depends on it - the most severe control is necessary. Measures of “switching to another job” are not enough - the methods of Peter the First and Stalin are needed. This is a question of the survival of the Russian civilization. We need a new fleet and a well-armed and prepared army, otherwise the Russian Federation and its elite will be swept away by the storm of the Great War. 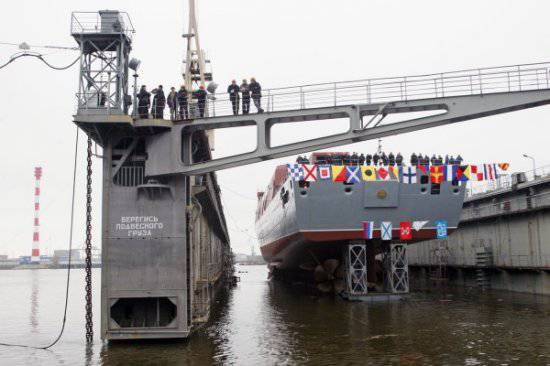