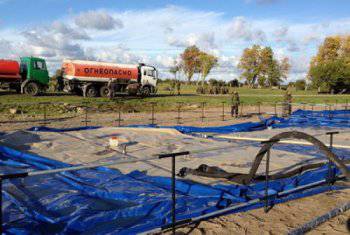 In the army they say: without fuel equipment is dead. By weight in the system of logistics of the modern army 70 percent are petroleum products. When conducting combat operations, their reserves must in some cases be brought closer to parts of a group of forces. Therefore, it is not surprising that at the last Interpolitex-2013 exhibition, the 25 exposition of the State Scientific Research Institute of Himmotology of the Russian Defense Ministry aroused great interest due to the importance of research in the field of chemotology and coordination of work on the development and use of new types of fuel and lubricants in technology. , special liquids and equipment of petroleum products.


The status of scientific research in the field of field fuel depots and their implementation of the “Red Star” correspondent spoke with the head of the department of fuel depots 25 of the State Scientific Research Institute of Himmotology Yuri Rybakov. Here is what he told.

A storehouse of innovation

During the preparation and conduct of hostilities, it is necessary to create stocks of fuel that are kept in warehouses. This requires the deployment of warehouses of different capacity and mobility in order to bring supplies closer to the troops.

This task is carried out by field fuel depots, designed to bring fuel supplies closer to the troops, accumulate them in established volumes and provide uninterrupted support for the troops. In accordance with the operational and logistical requirements imposed on them, these warehouses can have different capacities and can be used both as large fuel terminals, including for the air force field airfields, and as an intermediate tank group of the field trunk pipeline. The scientific staff of the Institute has developed and, jointly with the domestic industry, prepared for operation a module of the field fuel depot. The field fuel depot is a complex of technological elements, which includes elastic tanks, fuel transfer and metering facilities, pipelines, protection and control systems. Its main purpose is to receive, store and dispense fuel at outside air temperatures from minus 60оС to plus 60оС. And now we are talking only about the fuel field storage module, its base unit with a total capacity of 1.000 m 3. The fuel depot consists of one or several such modules, and its structure allows both increasing total storage volumes and reducing them, depending on the needs and the task being performed. At the same time, there is a massive refueling of fuel supply units according to the existing strict standards.

The main element of the warehouse is an elastic tank. It constructively represents the hermetic closed shell of the “pillow” form, which is equipped with a discharge pipe for receiving and dispensing fuel, as well as air and drainage pipes. For ease of deployment, stacking and folding the tank around the perimeter has special loops. One flexible tank with a capacity of 50 cubic meters weighs 125 kg, and in fact the procedure of its deployment is able to perform the calculation of two people.

It takes one and a half to two hours to deploy the module from the moment the equipment arrives at the site and prior to the start of work under the temporary scheme. According to the full scheme, it is developed (minimized) by a calculation of six people in approximately 16 hours, when all reception / output lines, process equipment, fire extinguishing equipment, metering and metering, quality control, and active lightning protection are fully installed.

Another of the features of the warehouse, which paid special attention - the choice of structural material for the manufacture of elastic tanks. It is made of modern polymeric materials based on thermoplastic polyurethane. After all, it is very important not only to receive and issue fuel, but also to maintain its quality at various ambient temperatures.

The selected material provides such critical tactical and technical characteristics of the shell as resistance (inertness) to the effects of fuel, the environment and UV radiation, frost resistance, high abrasive resistance, and maintainability of the product in the field in case of mechanical damage.

In addition, the material from which the tank is made has a tensile strength index on the inner chord 4-5 times higher than that of the materials previously used in our country. At the same time, the material consumption of new tanks is reduced by 4–4,5 times compared with those made of rubber-fabric material. Due to this, the warehouse can be transported aviation, road, water, rail.

To ensure environmental safety, there are pallets that prevent fuel spills on the ground in case of an emergency depressurization of the tank. Repairing damage to tanks and pipelines can be performed in field conditions using repair tools that are included in the field fuel storage kit.

The system of active lightning protection FOREND is also one of the features of the warehouse. It does not just take a lightning strike on itself, but also removes it from the protected object. The operation of the system is carried out due to the potential difference formed between the thunder cloud and the surface of the earth. At that moment, when the electric field strength reaches a critical value, a leading discharge comes from the lightning rod towards the lightning. In the event of a lightning strike over the protected area, it will be “caught” by an interception receiver and retracted into the ground.

The FOREND system is easy to install, and grounding for it is easy to manufacture and removes the need to dig trenches around the perimeter of the object and lay grounding, which is mandatory in the case of passive lightning rods.

Chemotology is the science of performance, quality and rational use of fuels, oils, lubricants and special fluids in engineering. The name of the science proposed by the Soviet scientist in the field of lubricating oils, Professor Konstantin Karlovich Papok.

It should be noted that the 25 State Research Institute of Himmotology for several years at many specialized exhibitions showed some elements of the developed complex. They caused great interest among specialists and were very seriously appreciated by professionals.

For the first time, the module of the field fuel depot was fully demonstrated at the West-2013 strategic exercise. All technical requirements imposed on this project by the Russian military department are fully met. When using the tested module of a field fuel depot, all the tasks for receiving and issuing fuel were fulfilled within the prescribed regulatory timeframe. He received a positive assessment from the leadership of the Ministry of Defense of Russia, aroused the interest of the Belarusian military. And this is not by chance, because at present it is undergoing state tests. The first stage of these tests was carried out at the Khmelyovka training ground (Kaliningrad region), where the active phase of the strategic exercise “Zapad-2013” passed. It was here that the capabilities of the warehouse for the reception of fuels and lubricants, their storage and distribution were checked. At the mass issue site, a car refueling company was refueled.

At the second stage of the state tests, certain corrective tasks will be solved. It is not a secret that certain roughnesses are revealed and eliminated during the tests. The company that manufactures the fuel field storage module has already completed a number of specific work to eliminate them. From early October until December, he will undergo troop tests on the basis of the pipeline battalion in the village of Ilino, Nizhny Novgorod region, where they will work out standards for deployment and coagulation, interaction of the warehouse with the troops, as well as the implementation of internal technological operations associated with the operation of the field fuel storage module. 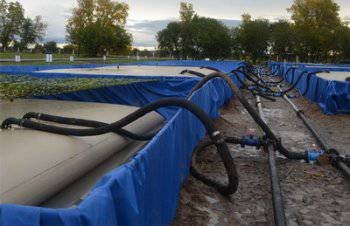 Currently in the Russian Federation, as well as throughout the world, special attention is paid to the creation of synthetic liquid fuels. In this direction we are talking about the use of alternative resources of oil - gas, coal, biomass. As part of the national programs of 25, the State Research Institute of Himmotology, together with other institutes and the Russian Academy of Sciences, has developed domestic aviation synthetic fuel.

Innovative solutions are being introduced by the institute in the traditional technologies for the production of fuels from petroleum raw materials. As part of this task, fire-proof diesel fuel for military and special equipment has been developed, which can be manufactured under military conditions using specific procedures using special substances created by specialists of the Russian Ministry of Defense together with industry. The new technology has made it possible to significantly reduce the fire hazard of fuel and, consequently, increase the survivability of military equipment in combat conditions.

Modern requirements for engines and aggregates are becoming increasingly stringent. In accordance with global trends in an ever wider range of technology, synthetic oils are used, gradually displacing mineral-based oils. The manufacture of synthetic-based oils can significantly expand the range of their application and increase engine life. The scientists of the institute successfully implemented a number of developments on this topic.

For turboprop engines of strategic aviation aircraft, a multigrade oil has been created that improves engine performance.

A significant part of the development of the institute is associated with universal all-season oils for highly accelerated gasoline and diesel engines with a higher compression ratio, increased energy intensity and thermal characteristics. The development of this technology itself is to some extent related to fuels and lubricants planned for use in new complexes.

A new preservation oil has been developed on a synthetic basis to protect against atmospheric corrosion of small arms in all climatic zones all-season. It has high anti-corrosion properties in a wide range of outdoor temperatures and allows 4-5 times to reduce the number of maintenance services of rifle complexes without their re-preservation before commissioning.

Of the new developments of the institute, anti-wear additives and additives at the nanotechnology level are very relevant, which can significantly increase the engine's life, up to ensuring its operation in the absence of oil in the lubrication system. It is quite clear that thanks to this, the withdrawal of military equipment from the enemy's affected area is ensured. In addition, new additives provide fast guaranteed engine start at low temperatures. As a result, the use of these new products provides increased reliability, efficiency, reduced maintenance costs.

All the innovative developments of 25 of the State Research Institute of Himmotology, which we are talking about today, are protected by patents and certificates of protection of the Russian Federation. At the same time, most of the products created in the last 5 years have already passed state tests and are being manufactured for the Armed Forces.