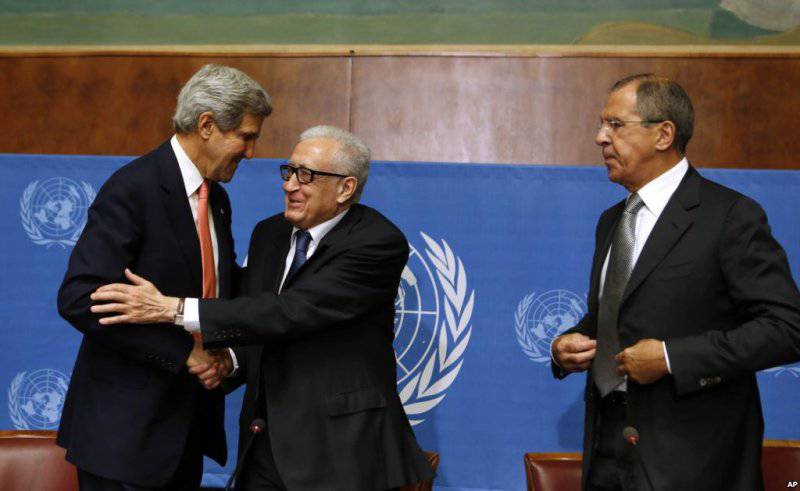 The main topic of political consultations was the preparation for the upcoming conference on the peaceful settlement of the crisis in Syria "Geneva-2". Despite the fact that formally an agreement on holding this conference was reached between the Russian Federation and the United States in May 2013, the forces supporting the so-called “Syrian opposition” are constantly delaying its convocation. They also, in violation of the agreements, are trying to set absolutely unacceptable preconditions. All this, naturally, does not contribute to the peace process.

At the talks held in Moscow, the Syrian and Russian sides pointed to the importance of convening the Geneva-2 peace conference as soon as possible.

The Syrian delegation warmly thanked Russia for the help and support. Russian diplomats highly appreciated Syria’s readiness to take part in the upcoming event without any preliminary conditions, but the so-called “opposition” is not yet capable of this. Issues such as strengthening bilateral relations, the situation around the destruction of chemical weapons in the SAR, humanitarian aspects of the crisis were also discussed.

In particular, Russia recently sent to Syria, through the Ministry of Emergency Situations, a large number of medicines as an aid to friendly people. In the West, the Syrian government is trying to blame the fact that it is allegedly guilty of a difficult humanitarian situation in some parts of the country. Although on the part of those who imposed stifling economic sanctions against Syria, it’s just blasphemous to talk about it.

During the talks with the Syrians, Russian Foreign Minister Sergey Lavrov highly appreciated the flawless cooperation of official Damascus with the joint mission of the OPCW and the UN on the elimination of chemical weapons. He pointed out that the government of a friendly country pays great attention to humanitarian aspects: "We appreciate that the leadership of Syria, continuing the fight against terrorism, does not lend itself to provocation and is building up cooperation with humanitarian organizations in order to facilitate the fate of the population."

Lavrov also noted that the fight against terrorism is an absolute priority, and almost all countries in the world with whom Russia is negotiating are beginning to understand.

The delegation from Damascus coincided with the visit of the Deputy Foreign Minister of Iran, Hossein Amir Abdollahiyan, to Moscow. The Syrians held constructive talks with him.

As the journalist Faisal Al-Mekdad said, the views of Syria and Iran on most issues, such as the convening of the "Geneva-2" and the fight against terrorism, coincide. Both countries have common enemies, such as the West, Saudi Arabia, and Israel. These parties are doing everything to disrupt the peace process and increase tensions in the Arab region. Al-Mekdad noted that there is close cooperation between Damascus, Tehran and Moscow.

At a press conference after the talks, Abdollahiyan said: "We held talks with our Syrian friends and discussed the political resolution of the crisis and the Geneva-2 conference, as well as the fight against extremist terrorist groups that supply weapons and money and commit terrorist acts against the Syrian people. "

According to him, the support of Syria in the fight against terrorism should be the task of the entire world community. Abdollahiyan added that Iran will support the peaceful resolution of the crisis through dialogue. At the same time, official Tehran respects the right of the Syrian people to independently determine their future.

Unfortunately, this position of Iran is a “bone in the throat” for extremist forces in the Middle East and for their sponsors and patrons. 19 November in Beirut was committed a terrible act of revenge on Iran for its honest and constructive position. Two strong explosions thundered near the Iranian embassy in Lebanon, located in the south of the capital.

As reported from Beirut, the first explosion was carried out by a suicide bomber. When the embassy staff went out to see what happened, there was an even stronger explosion. Was involved mined car. As a result of the crime, at least 23 people died - both staff members of the diplomatic mission, as well as bystanders and citizens living in neighboring houses. More than 150 people were injured. According to the Iranian side, the Iranian ambassador to Beirut Gazanfar Ruknabadi, fortunately, was not injured.

The Syrian government strongly condemned the attack, stating that it once again confirms the need to fight international terrorism, and the world community should condemn those countries that support the perpetrators of such atrocities.

The leadership of the Arab Socialist Renaissance Party, expressing condolences to all the relatives of the victims and the Iranian and Lebanese peoples, stressed that such crimes from which innocent citizens of Lebanon, Iran, Syria suffer are part of the plans of the new colonialism and its satellites in the region - reactionary petrodollar regimes. In addition, terrorism aimed against various countries is for the benefit of the Zionist territorial entity.

The terror continues in Syria itself. Daily mortar shelling of residential areas continue to claim lives. On November 19, the Aleppo City Hall was shelled, 4 people were killed and 10 injured. In Damascus, an 6 man was injured as a result of the shelling of the Red Crescent Hospital in Baghdad Street. Another projectile hit the school "Zeid Ibn Al-Khattab" in the Abbassiin metropolitan area - three citizens were injured.
As a result of a similar crime, material damage was caused to one of the main attractions of Damascus - the ancient, huge Umayyad mosque. Fortunately, there were no casualties.

The next day, November 20, one person died and five were injured because of a mortar attack on a school in Al-Kassa’s Christian quarter.
In the meantime, Syrian President Bashar Al-Asad received a delegation consisting of representatives of Arab patriotic parties who are holding their own congress in the Syrian capital these days.

Bashar Al-Assad stressed that in recent years, the role of parties in the Arab world has declined, and this has contributed to the penetration into the society of alien ideologies. Therefore, in order to prevent the further spread of these hostile ideas, it is necessary to activate the role of patriotic parties and public organizations in the name of the common interests of the peoples of the region.

The guests, for their part, highly appreciated the resilience of Syria, which is upholding its independence and fair issues of the Arab nation. They added that Damascus is not alone in this struggle - the Arab peoples support the Syrians, despite the fact that the countries of the region are under pressure, and they are experiencing difficult conditions.
Elena Gromova, Damascus

Ctrl Enter
Noticed oshЫbku Highlight text and press. Ctrl + Enter
We are
“Geneva-2” has begun, provocations continueSyria: Americans scare themselves, and Asma Asad buys chairs
7 comments
Information
Dear reader, to leave comments on the publication, you must to register.