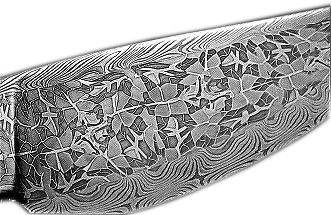 If you rank yourself among the glorious pleiad of hunters, then quality products from Online knife shop knife-klinok.ru will definitely interest you. The site contains offers of hunting knives from forged steel of the highest quality. One of the types of steel that has long been used for the manufacture of cold masters weaponsis Damascus steel.
Special types of Damascus steel include a unique type of metal, which is created by repeatedly re-forging steel billets, the carbon content in each of which is its own. As a result of such a re-crafting Damascus steel is obtained with a special pattern, which is characteristic and easily recognizable. Today, such a pattern is obtained not only in the forges, where the creation of blades for melee weapons is carried out by the method of multi-stage reforging. There is also an imitation option. The pattern is applied to ordinary steel. Such a blade in price and quality will be significantly inferior to the forged blade according to Damascus technology.
A lot of the most diverse myths go around real Damascus steel, the main one of which is that a real Damascus blade can cut the steel armor of a warrior like ordinary wood. However, not a single truly documented evidence that the blade is capable of such a thing in the world historical no literature found. But such "evidence" is replete with fiction 100-200 years ago. It describes how Arab warriors literally cut the crusader plate armor with their sabers during the Crusades. In fact, the words about “dissecting” one type of steel of another type of steel in this case can be considered nothing more than an artistic exaggeration. The metal used by the crusaders as a material for protective armor was far from so thin and weakly strong that it could be cut with a blade made of cast damask steel. In addition, such words are more like literary fiction also because by the time such cold weapons as a saber from cast damask steel appeared, the Crusades themselves had ended.
However, this very phrase “Damascus steel” looks fascinating. People do not particularly go into details about what actually cut the armor of warriors in the 11-12 centuries, and therefore are ready to believe that these are blades of Damascus steel. In fact, cast damask is a magnificent metal according to its characteristics, but this does not mean at all that it should be mythologized, forgetting about the scientific approach to the question.
Ctrl Enter
Noticed oshЫbku Highlight text and press. Ctrl + Enter
We are
Samurai and kajiIn the Voronezh region raised a unique T-34
2 comments
Information
Dear reader, to leave comments on the publication, you must to register.