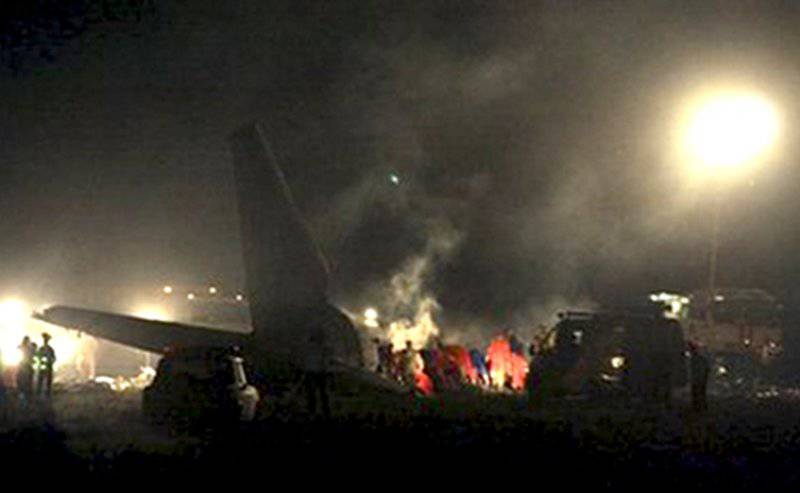 At the airport of the city of Kazan there was another plane crash with a large number of casualties. An American-made aircraft crashed during landing. This makes you turn back to you as the guarantor of the constitutional rights of citizens of the Russian Federation. In particular - the right to life. For many years, it has obviously been ignored by high-ranking civil servants, whose direct responsibility is to provide Russian airlines with reliable new domestic aircraft.

To this end, in particular, the United Aircraft Building Corporation (UAC) and JSC were established “Ilyushin Finance Co.". The first included the majority aviation design bureaus and aircraft factories. The charter of the second states that it is created to help in the production and implementation of Russian civil aircraft.

Unfortunately, the KLA, led by Pogosyan MA, not only did not start the production of civil airliners. His efforts were criminally disrupted the production of short-haul aircraft Tu-334, received in the 2005 year, all the necessary documents for its operation. They ignored the order of the government and yours personally at the beginning of serial production. Instead, according to various estimates, many tens of billions of rubles were spent for the design and production of aircraft. "Dry Superjet 100". He never found a place for himself in the Russian sky due to the well-known deficiencies of specialists. One Superjet crashed in Indonesia with foreign customers aboard. Another one lay destroyed near the airport runway Reykjavik (Iceland), like a gravestone monument.

Meanwhile besides Tu-33410, ready for flight operation for years, has just received all airworthiness certificates for medium-range aircraft Tu-204 CM. Its reliability is indicated by the fact that airplanes of this type are used in the presidential flight squad and in the interests of the Russian Defense Ministry. But this aircraft, for which the Ulyanovsk Aviastar aircraft factory is ready for serial production, remains unavailable to Russian airlines for Poghosian’s efforts. The KLA led by him winds up a 30% mark-up. Can't be said about foreign-made airplanes, including flight trash, like the one that crashed in Kazan Boeing 737.

A few words about Ilyushin Finance. It is characterized by such an eloquent fact. At the beginning of this year, Ilyushin Finance management was forced to conclude a contract in Canada for the purchase and operation of Canadian 32 aircraft in Russia Bombardier CS300, although they did not pass even flight tests. The transaction took place in the presence of Minister of Industry and Trade D. Manturov.

Against this background, a severe crisis continues to develop in the civil aviation industry of the Russian Federation. Its main reason is that the industry is managed by people who either have obviously criminal intentions or who do not understand anything in the subject. For example, the head of the UAC, M. Pogosyan, was previously engaged only in military aviation. Civil airliners were clearly beyond his power. He created an almost family structure. Sukhoi Civil Aircraft (GSS), which to no avail mastered hundreds of billions of rubles. At the same time, the world-famous design bureaus of Tupolev and Ilyushin, which released hundreds and thousands of civilian aircraft into the sky, were simply humiliated, if not destroyed.

The appeal to you and the President of Tatarstan Rustam Minnikhanov, whose son Irek died in this terrible disaster, did not help either. Like its predecessor Mintimer Shaimiev, he insisted on the mass production of new civilian Tu-planes at idle facilities of the Kazan aircraft factory.

Thus, the disaster in Kazan and earlier in Perm of the same type of American aircraft could not be. It was enough for 10 years ago to launch new domestic liners into mass production. That never happened. In the Russian sky today flies to 750 used foreign-made aircraft, and their number continues to grow. At the same time, it is known that almost nothing comes directly from American and European conveyors. The same applies to spare parts. Often it is the restored parts. On the scale says such a fact. To maintain the airworthiness of these aircraft, Russian airlines spend about a month 200 million dollars. Therefore, the price of air tickets in Russia is the highest in the world.

Unfortunately, being already prime minister, and DA Medvedev failed to deal with the real state of affairs in the civil aviation industry. Messrs. Poghosyan and Manturov received his signature on the civil aircraft industry development program, which does not take into account anything that could save both the industry and thousands of human lives. In it there was no place nor KB them. Tupolev nor KB them. Ilyushin. Only phantoms, more than half consisting of foreign components, like the same "Superjet".

Dear Vladimir Vladimirovich! We still have time to fix it. It is enough to listen to the expert opinion, which can be developed in the shortest possible time, and restore order in the industry. If you consult with political parties about the candidacy of the governor or the mayor, then why not listen to professional aircraft designers and manufacturers of civil aircraft, having appointed a professional specialist to head the UAC. Otherwise, you will continue to be deceived by professional "phelers from the aviation industry", whose goal is to "master the budget", enrich themselves, and write off all failures to the world crisis. But there was no crisis in the global aircraft industry, and there never will be! For global manufacturers lined up a huge queue of aircraft buyers for the years ahead. Why did the Poghos-Manturov deprive our country of such privilege to the joy of competitors?

If urgent and necessary measures, first of all personnel, are not taken, then the blame for all future air crashes and human casualties will fall on the country's leadership. Only it has the power to stop the planned killing of people.

Ctrl Enter
Noticed oshЫbku Highlight text and press. Ctrl + Enter
We are
Open letter of veterans of UKBTM to President Vladimir PutinList of destroyed the largest and most high-tech enterprises
330 comments
Information
Dear reader, to leave comments on the publication, you must to register.