China has published information about the CM-400AKG rocket

November 21 2013
14
China rarely pleases specialists and amateurs of military equipment with official information about their new developments. Messages about a particular project may appear with a long break. Thus, the characteristics of the new CM-400AKG cruise missile were published only a year after it was first shown to the public. 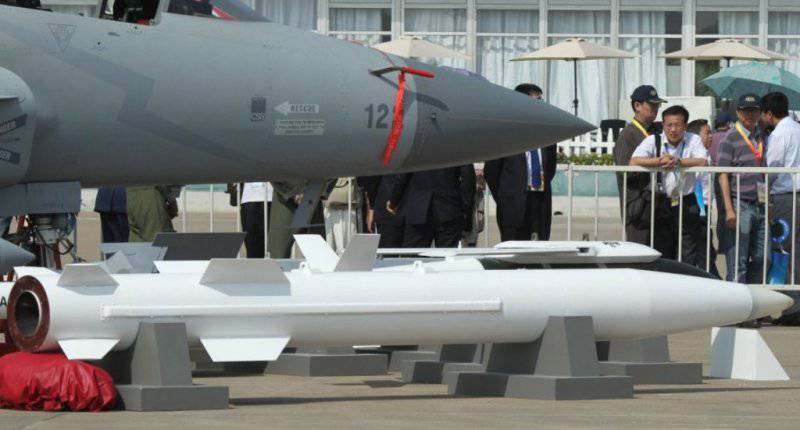 A year ago, in November 2012 of the year, at the Zhuhai Airshow (Zhuhai, China) exhibition, a stand with general information about the new CM-400AKG cruise missile developed by AVIC was noticed. The information about the new rocket, announced at that time, was very general. According to the advertising stand, the CM-400AKG rocket is intended for new Chinese fighter-bombers and is capable of attacking targets of various types. Due to the possibility of using ammunition against ships, he received the nickname "aircraft carrier killer". As far as this name corresponds to reality, only real armed conflict can show. In the meantime, in the judgments and calculations, you can use only the announced official information about the characteristics.

As reported by Flightglobal.com, at the Dubai Air Show-2013 (United Arab Emirates) exhibition a new information about a promising rocket was presented, revealing some details of its appearance. The launch weight of the CM-400AKG rocket is 910 kilograms. The total length of the ammunition exceeds the 6,5 meter, the diameter of the body - 0,4 m. The wingspan, as well as its design, is unknown. On the old images of the rocket featured four plane of small elongation. On the new photo layout CM-400AKG visible characteristic compartment lid, which may indicate the use of a different wing design.

CM-400AKG rocket is equipped with a solid-fuel engine, providing supersonic flight speed. The ammunition is launched at an airplane speed of about 750-800 km / h, after which it accelerates independently to cruising speed. The speed of the rocket on the march is unknown. A year ago, in some materials, this parameter was estimated quite high: it was claimed that the new Chinese cruise missile can reach speeds of up to 3,5-4М. It is possible that the real value of the CM-400AKG rocket cruising speed is about half that of these estimates. The launch range ranges from 100 to 240 kilometers. 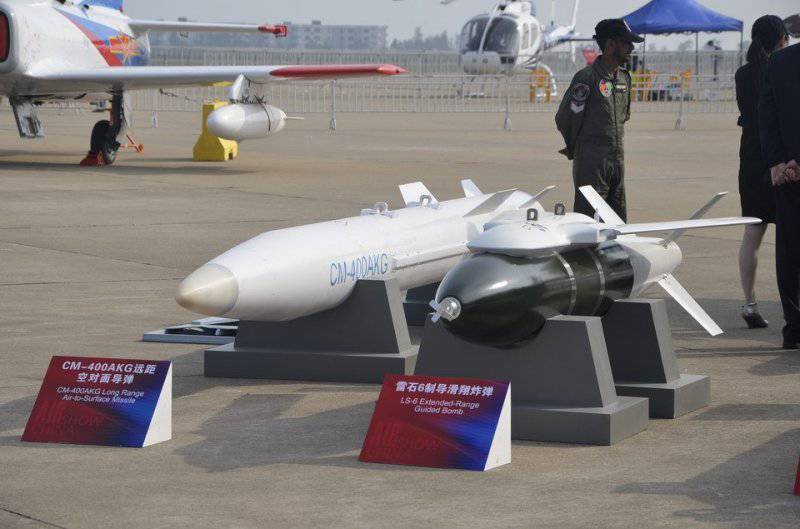 According to reports, a cruise missile can carry two types of warheads: high-explosive fragmentation with a total weight of 150 kg or penetrating mass of 200 kg. Available information on flight performance and warhead suggests that the CM-400AKG rocket can cause serious damage or even destroy modern warships. At the same time, however, to fully assess the combat qualities of the new ammunition, it is necessary to take into account the capabilities of the guidance system.

According to official information, the designers of the company AVIC equipped the CM-400AKG rocket with a combined guidance system using several methods for determining the location of the target. Depending on the tactical needs of the missile can use inertial, satellite, infrared and passive radar homing head. The least reliable is the use of inertial navigation system in combination with satellite: in this case, the circular probable deviation (CVT) of the rocket reaches 50 meters. The use of an infrared homing head (at the final part of the flight), allegedly, allows an order of magnitude improvement in accuracy. In this case, the QUO is equal to 5 meters. It is noteworthy that the simultaneous use of infrared and passive radar homing heads gives a QUO at the level of 5-10 meters. For what reason the radar system leads to such a drop in performance, it is not entirely clear.

Another unusual feature of the new rocket is the method of its combat use. According to published data, the CAC / PAC JF-17 Thunder fighter-bomber, considered the main carrier of the CM-400AKGb rocket, should launch at altitudes from 7800 to 11800 meters. Existing foreign cruise missiles of similar purpose fly at a small height above the ground or water, because of which there are certain restrictions on the launch height. The Chinese rocket, allegedly, should launch at a relatively high altitude to increase the survivability of the aircraft carrier.

The CM-400AKG cruise missile can be considered a logical development of Chinese guided weapons programs, which, in turn, are in a sense descendants of Soviet and Russian projects. However, the Chinese designers have applied several original solutions relating to both the design or equipment, and methods of using the rocket. It is impossible to say with certainty whether this or that idea was correct, but some of the nuances of the published information allow us to construct preliminary guesses.

For example, the claimed accuracy while using infrared and passive radar guidance systems raises questions. For unknown reasons, this method of missile guidance not only does not increase, but even worsens the accuracy of the hit. Nevertheless, the claimed “failure” can be exactly compensated by using only the infrared homing head or the power of the warhead. The available estimates of the flight speed make it possible to consider the CM-400AKG rocket to be a rather complicated, though not invulnerable, target for modern air defense systems.

In general, the Chinese CM-400AKG cruise missile, based on the available information, can be called a modern guided munition suitable for carrying out the tasks assigned to it. Naturally, the emergence of new information will complement the current appearance of the rocket and can even change it. However, at the moment CM-400AKG does not look something unique and breakthrough or hopelessly behind and outdated.

Ctrl Enter
Noticed oshЫbku Highlight text and press. Ctrl + Enter
We are
Project of the 15XM “Storm” cruise missileDomestic tank missiles and shells
14 comments
Information
Dear reader, to leave comments on the publication, you must to register.