November 21 2013
160
At 19:25 on November 17, a passenger plane of the Tatarstan Airlines crashed at the airport of Kazan. As a result aviation the catastrophe killed everyone who was on board a Boeing 737-500 plane that was flying from Moscow to the capital of Tatarstan, which is 6 crew members and 44 passengers (full list at the end of the article). 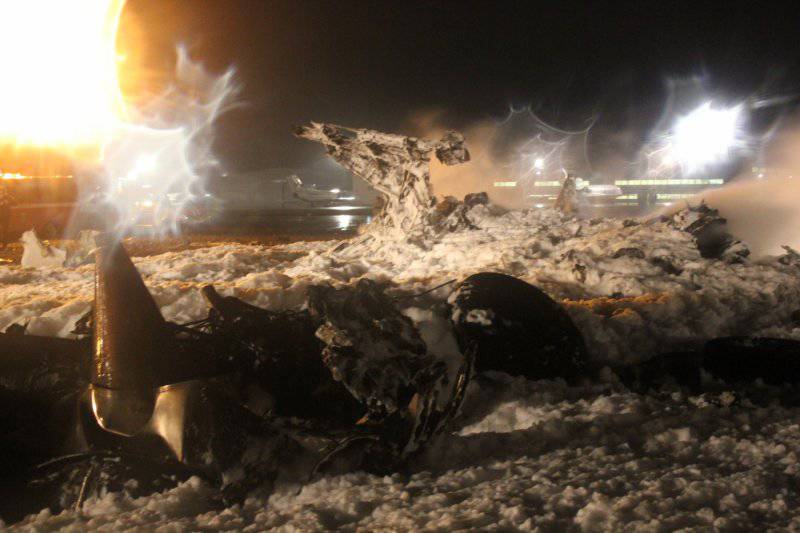 Boeing 737-500 with the hull number VQ-BBN for the first time rose in the sky 18 June 1990 year in France. The owner of the aircraft then became the French company «Euralair Horizons». Two years later, the plane was acquired by the company "Air France", which operated the aircraft for about three years. When, according to the management of the airline, Boeing finally turned into a "second-hand board", it was sold to Uganda. Here, after five years of flying in Europe, the liner was used by Uganda Airlines. It would seem that after using the aircraft on Ugandan airlines should have been the completion of the "career" of Boeing. However, Uganda Airlines also decided to make money on a fairly second-hand plane, and after five years of intensive operation, sold it to Brazilian airline Rio Sul. Another five years of flying - and again resale ... This time the Romanians decided to replenish their fleet with this very plane - Blue Air. However, in Romania, the plane did not go to the “well-deserved rest”, but was sold to the Bulgarian airline “Bulgaria Air”. And only after that Boeing 737-500 was in Russia. In 2008, the same Tatarstan company bought it from the Bulgarian side, by which this ill-fated board was used for five years (until the moment of the tragedy).

So, if you draw a chain of countries that exploited this aircraft for 23 years, it looks like this: France-Uganda-Brazil-Romania-Bulgaria-Russia ... The chain indirectly hints at what country they were going to infinitely profit from technology , which, if not to be put under the knife, should be at least overhaul.

It is noteworthy that the Boeing used in the airline "Tatarstan" already gave signals that its resource is not unlimited. One of the serious signals was received last year (November 26 2012 of the year) - depressurization sensors were activated. The pilots of the aircraft flying from Kazan to Moscow Domodedovo Airport, decided to return back, the landing was successful. True, there is no information about what ended the verification of last year’s incident with Tatarstan’s Boeing 737-500 airline ... There is only a comment from the head of the airline:

The malfunction that caused the depressurization was eliminated in normal mode.

There is evidence that this aircraft clearly needed overhaul from those passengers who themselves had recently flown on a Boeing. A considerable number of such evidence was published in social networks. On his page on VKontakte interesting details of the condition of the aircraft are given by Ruslan Kalimullin (Kazan city):

He flew today (17 November) by this plane from Kazan to Moscow in 15: 20, boarded Domodedovo as if the plane had a horizon stabilization system, the pilot barely leveled the ship before landing, when in contact with the ground, we were a little carried away, but the pilot coped, and I crossed myself. The fact that one of the passengers said on TV, such as when landing in Moscow, the aircraft had a strong vibration on the body, so it is on all old cars, this is observed during takeoff, the vibration goes not on the body, but on the inside lining, this is often found on airplanes that have not been restored for a long time.

Renowned not to fly on cheap flights, which this time the toad strangled me to buy a ticket not for 5 for a normal Aeroflot flight, but for this one for 3. I was not too lazy to call before buying a ticket, to clarify what kind of car this flight performs. Well, I think, since Boeing 500, everything should be fine. And when they sat down, I immediately noticed that the car was really already “tired”, and it became a little dumb ...

The result is this: People! do not save on tickets, the difference in money can cost lives.

Those who died probably had the choice to fly on another flight. I really flew plenty ...

However, employees of the airline "Tatarstan" frankly paid little attention to eyewitness accounts and information about the problems that had arisen with this plane. The material presented to the press by the official representative of the airline, means that 737 didn’t cause any technical issues. Moreover, the airline claims that the pilots who performed the ill-fated flight had a lot of experience. However, some time after such statements, the general director of Tatarstan Airlines, Aksan Giniyatullin, who, answering journalists' questions about whether the commander of that same Boeing had a go-around experience, said unexpectedly:

In other words, the head of the airline, as it were, is not aware of what real experience the pilot had. Now, it seems, it turns out that the crew was re-approaching the landing only on the simulators ...

The same Mr. Giniyatullin noted that the Boeing 737-500 flew on November 17 instead of another aircraft of the airline - Bombardier CRJ200. It turned out that more tickets could be sold for the flight than the Bombardier can accommodate, and therefore the Boeing was “released” to the airfield ... A somewhat strange explanation, isn't it? That is, it turns out that the airline sells tickets for the flight, based not on the number of seats on the plane, but from the fact “let them buy as much as they want” ... In this case, theoretically, a situation could arise where the tickets would be sold more than seats in 737 Boeing. And then what? Would replace a military transport worker, or what? ..

Only here another question appears: what does “Bombardier cannot accommodate ...”, because the Bombardier CRJ200 is designed for 50 passengers, and the 44 ticket was sold for the flight?

Now the investigation is studying the picture of the tragedy in Kazan from the records of the negotiations of the crew members of the Boeing with the air traffic controller. At the same time, the records of negotiations are studied not by the records of the flight recorder, but by the records made in the control room. The fact is that the black boxes of the aircraft found at the scene of the tragedy are badly damaged. So much so that in one of them there is no special capsule (cassette) with audio recording. The voice recorder cassette was found on November 20 around 14: 30 Moscow time.

Representatives of the country's Investigative Committee state the following:

The content of these negotiations indicates that, in general, they were of a regular character before the pilot was informed about the non-landing position of the aircraft, that is, the disparity of the movement vector of the aircraft to the end of the runway and the departure for the second round.

After the dispatcher gave the command to the pilot to gain height in 500 meters, the pilot uttered the phrase “second round”. After a moment, the plane fell to the ground and exploded.

He (talking about the pilot - author's note) reported to me that he was going to the second round, and I gave him a set - everything is according to the documents - that's all. And he said that he has a non-stop configuration. I gave him a set, as it should be standard. He confirmed. And did not leave.

At the same time, data was obtained from the so-called parametric recorder. Representatives of the Interstate Aviation Committee (IAC) on their official website stated that they investigated the information received. We provide research materials in the form in which they are published by the IAC:

In the course of the approach, the crew was not able to perform a standard approach in accordance with the scheme established by the regulatory documentation. Assessing the position of the aircraft relative to the runway as "non-stop", the crew reported to the dispatcher and began a go-around in TOGA mode (Take Off / Go Around. Take-off / Go-around). In this case, one of the two autopilots involved in the approach process was turned off and further flight was carried out in manual mode.

Under the influence of the cabling moment from the thrust of the engines, the plane went into a climb and reached a pitch angle of about 25 °. The instrument speed began to decrease. The crew cleaned the chassis. Since the beginning of the go-around, until this time, the crew has not taken any active actions to control the aircraft.

After reducing the speed from 150 to 125 nodes, the crew began controlling the steering column to transfer the aircraft to a dive, which led to the cessation of climb, the beginning of a decline of the aircraft and an increase in instrumental speed. The maximum angles of attack during the flight did not exceed the operational limits.
The plane, reaching a height of 700 m, began an intensive dive with a pitch angle that reached the end of the flight -75 ° (end of recording).

The plane collided with the ground at high speed (more than 450 km / h) and a large negative pitch angle.
From the moment of the start, the go-around to the end of the recording took about 45 seconds, the decline took about 20 seconds.
Power plants worked until the collision of the aircraft with the ground. One-time commands that characterize the failures of the systems and units of the aircraft and engines, according to the results of the preliminary analysis were not identified.
The analysis and decoding of parametric information continues.

Such information leads experts to believe that the crew could "lose the ground." In other words, cloudiness and darkness could cause pilots to lose their orientation in space. However, this version is also not indisputable, as it gives food for thinking about why the pilots ignored the readings of the instruments, which clearly spoke of an active approach to the ground. As an excuse for the actions of the pilots can serve as a version of the failure of the aircraft steering wheel during a dive. The steering wheel could simply jam. But this is just a version ...

In the meantime, only one thing is clear: once again a catastrophe, again victims, again talks about the professionalism of the crew and about the attempts of airlines to earn on well-known planes at all costs. And the price of this profit today looks really scary.

The dead pilot "Boeing-737-500" Rustem Salikhov served as captain of the aircraft for a year and a half. Most of his life 47-year-old Rustem worked as a navigator on the Tu-154 of the airline "Tatarstan". In 2008, Salikhov came under a reduction - the airlines became almost unclaimed in the Tu-154. He had retrained at St. Petersburg State University for one and a half years, then he began internship flights. At the helm of the Boeing, Rustem Salikhov first sat in the 2009 of the year, flying for four years as a co-pilot. And in March last year, became the commander of the aircraft

PS A complete list of those killed in the Boeing-737 plane crash in Kazan:

We express our sincere condolences to the families and friends of the victims. 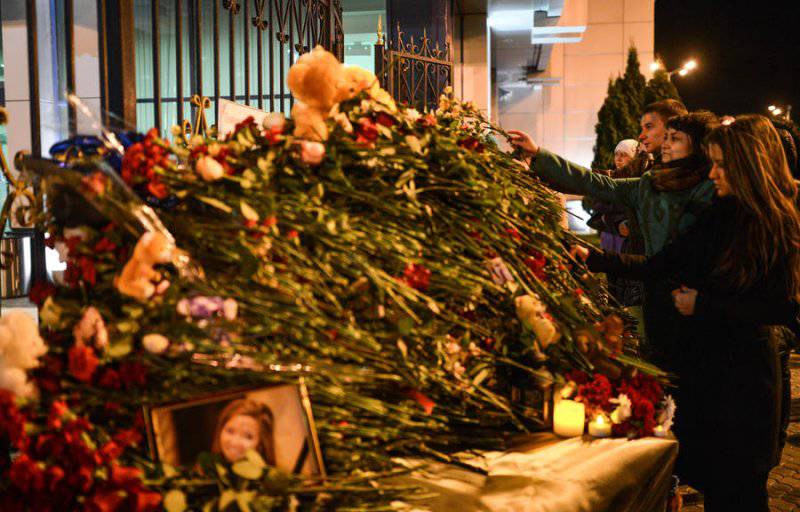 Ctrl Enter
Noticed oshЫbku Highlight text and press. Ctrl + Enter
We are
The collapse of the "Boeing" in Rostov. Black Saturday, 19 March March 2016Situational analysis of the death of the MH17 flight (Malaysian Boeing 777), made on the basis of engineering analysis from 15.08.2014
160 comments
Information
Dear reader, to leave comments on the publication, you must to register.