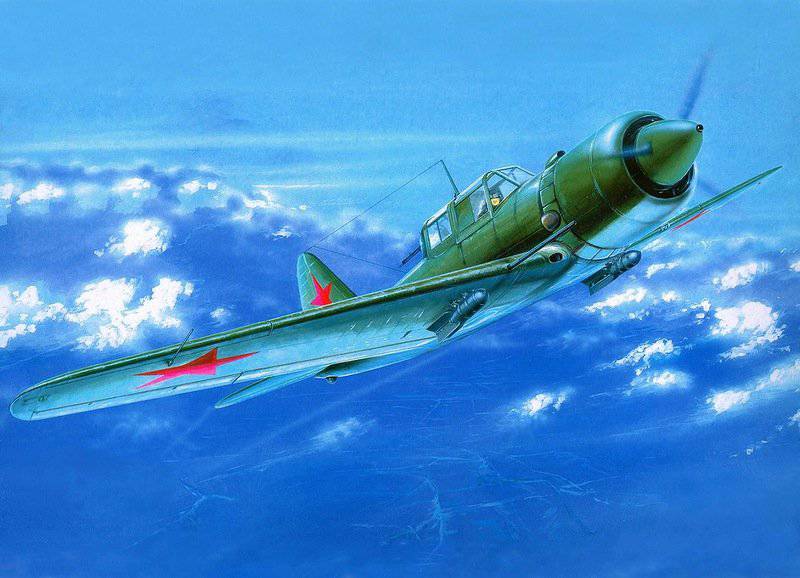 In 1940, the Su-2 bomber (BB-1), designed by Pavel Osipovich Sukhoi, was launched into production. This aircraft was created under the program "Ivanov", which meant the creation of a single-engine, mass multipurpose aircraft capable of performing the functions of a reconnaissance aircraft and light bomber. From other Soviet aircraft of this class, the Su-2 was distinguished by advanced manufacturing technology and good visibility from the cockpit.

With all the advantages of the new aircraft, it was ineffective when used as an attack aircraft. To do this, it was necessary to strengthen the armament and increase security. Preliminary calculations have shown the impossibility of implementing this on the Su-2, without degrading the flight data. Therefore, it was decided to build a new aircraft.

In September, the conceptual design of an armored attack aircraft was presented to 1939, and in early March, the government included it in the pilot aircraft design for the 1940 year.
The design team of P. O. Sukhoi was instructed to: “Design and build a single-engine armored single-seat attack aircraft with an M-71 engine”. 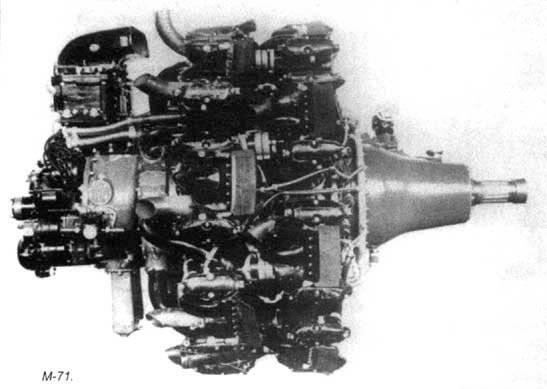 The main difficulties in creating attack aircraft were associated with the lack of air-conditioning engines M-71. This 18 twin-cylinder star-shaped, engine, with rated / maximum power - 1700 / 2000 hp It was developed by A.D. Shvetsov and was a further development of the American Wright Cyclone R-1820. 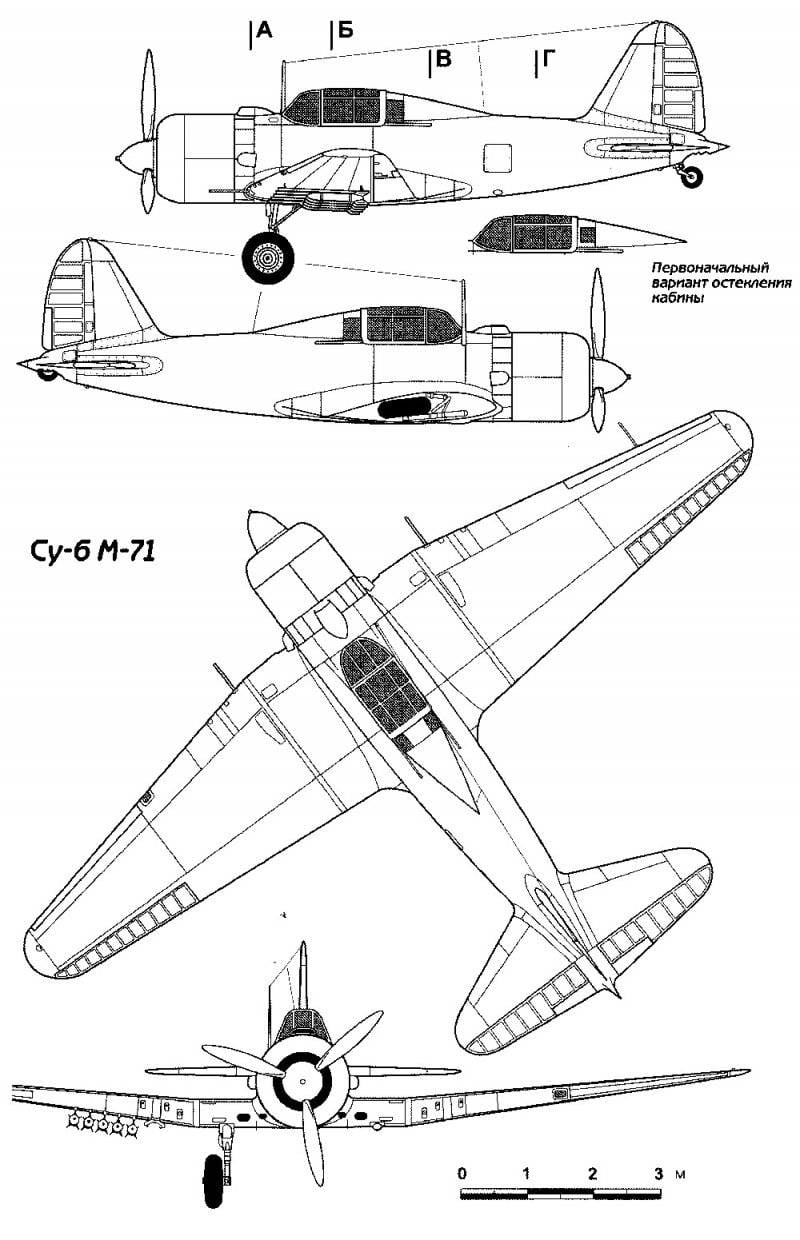 The first version of the Su-6 was equipped with six ShKAS machine guns (of which 2 are synchronous). Intra-body payload was designed in the following versions:
a) bomb FAB-100;
b) 2 bombs FAB-50;
c) 18 bombs AO-10, AO-15 or А0-20;
d) 72 bomb caliber from 1,0 to 2,5 kg.
In addition, on the external suspension, attack aircraft could carry 2 bombs FAB-100 or 2 bombs FAB-250. Armor for the aircraft was designed in the form of "armored hull", which protected the cockpit from below. Bronespinka excluded the defeat of the pilot from behind, and bent armor plate covered the gas tank. Pilot protection from the sides - on the chest. Front booking was missing. The pilot's head and oil cooler in the original version also had no protection.

1 March 1941, test pilot of the plant No. XXUMX A.I. Kokin, lifted into the air the first prototype of the Su-289 aircraft. By May 6, the test program completed about ten flights, during which they discovered and eliminated a number of defects in the power plant and aircraft systems. Most complaints caused the engine.
In this regard, the test aircraft was delayed, and the outbreak of the war and the subsequent evacuation exacerbated the situation.

Su-6 was able to enter state tests only in January 1942. On the attack aircraft was strengthened weapons and booking.

According to the piloting technique, the aircraft is simple and accessible to medium-skilled pilots, has good stability and allows flying with an abandoned pen in all modes. However, it was noted that the review on taxiing is insufficient and therefore it is necessary to steer a snake. In the air, the review was rated as satisfactory.
Booking of the cockpit of the pilot and flashlight is carried out similarly to the IL-2. The back cover of the motor with units is reserved, the cylinders of the motor are not reserved.
The state test report also reported:
"... the Su-6 with the M-71 engine is at a maximum horizontal flight speed higher than the Il-2 AM-38 attack aircraft;
- after completing the mission (dropping bombs and PC-132), the Su-6 M-71 aircraft has a maximum speed of 483 km / h at a ten-minute afterburner. This speed makes the Su-6 difficult to reach for enemy fighters, having a slight speed advantage;
- consider it appropriate to build a small military series of Su-6 M-71 airplanes as being of interest at a relatively high maximum horizontal speed and having powerful cannon and rocket armament. "

However, the improvement of the aircraft continued. To improve flight performance, a boost engine M-6F was installed on the Su-71 with a nominal / maximum horsepower 1850 / 2200.

But by this time, based on the experience of hostilities, a double version was already required. The twin-armored Su-6 attack aircraft with the M-71F engine were designed and built in 1942, and from June to August 20 30 brilliantly passed state tests from June to August. Su-1943 had excellent stability and controllability, was simple and pleasant to fly.

The aircraft was equipped with powerful wing mechanization (it had automatic slats and Schrenk guards), which made it possible to steadily perform maneuvers at high angles of attack. This was very important for a low-altitude battlefield aircraft. For the pilot to enter the attack in a limited space above the target, it was necessary to maneuver mainly in a vertical plane. Significantly improve the data of the Su-6 in comparison with the IL-2 without deterioration of maneuverability in the vertical plane succeeded by reducing the load on the engine power. Thus, the serial IL-2 with AM-38F with a wing load of 159 - 163 kg / m² had a vertical speed at the ground around 7,2 m / s, and Su-6 with a load of 212,85 kg / m² - 9,3 m / s. 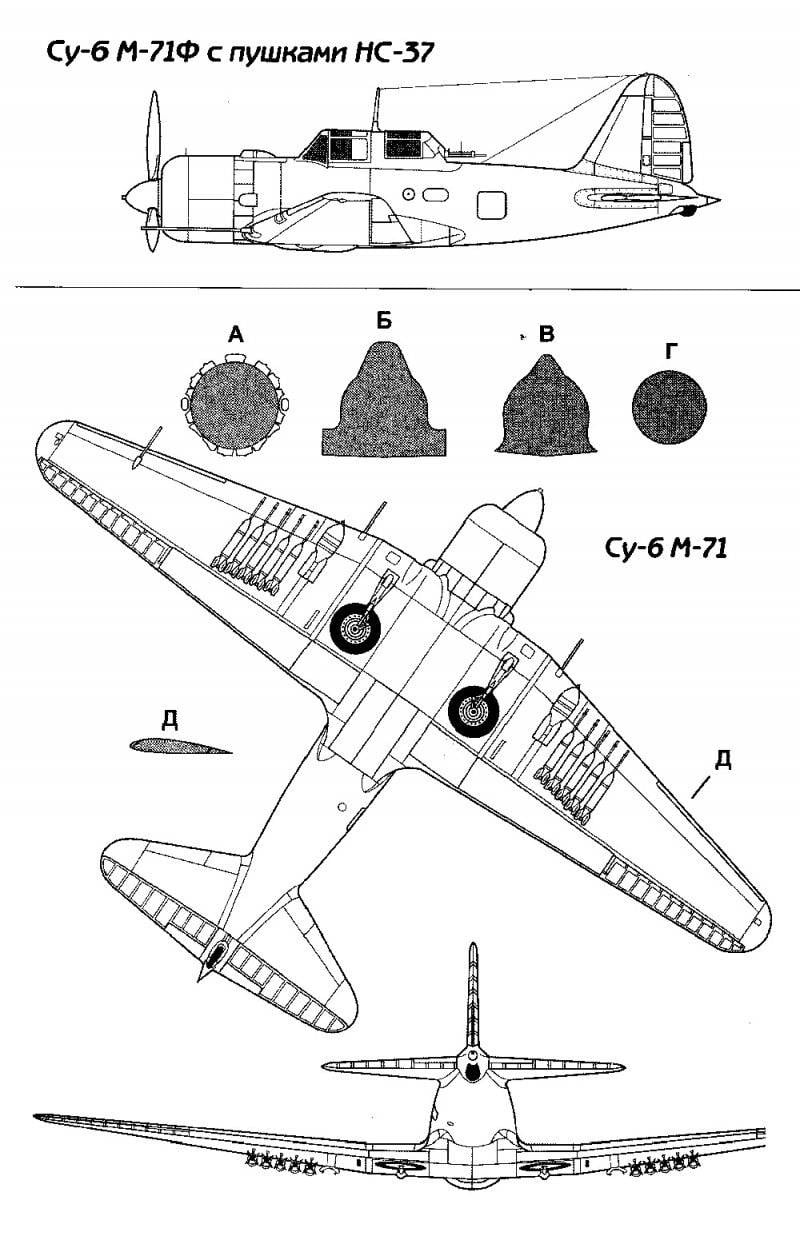 Reservation Su-6 was significantly better than the IL-2. Due to a more rational distribution of sheet thicknesses, the total mass of armor was only 683 kg — 18,3% of the weight of an empty aircraft. The thickness of the armor in the cockpit shooter and in the area of ​​the propeller group were selected taking into account the influence of the structural elements of the aircraft (fuselage skin, bomb bay, etc.) on the geometry of the projectile impact from the armor with the most probable firing directions in real air combat. This approach made it possible to seriously reduce the weight of the armor with a significantly better protection of the crew and vital elements of the aircraft’s structure than that of the IL-2, which, with a total weight of 957 armor, kg, the air gunner didn’t have protection, and the most vulnerable from enemy fire were not sufficiently thick . The survivability of the attack aircraft was also increased by pressurizing the gas tank with exhaust gases and duplicating the control of elevators and heading. And the air-cooled engine itself was much more tenacious in the event of combat damage.

The plane had certain reserves in terms of enhancing body armor. Based on the experience of the hostilities, it was possible to replace the upper frontal armor of the hood with duralumin sheets, since this part of the aircraft practically did not come under fire.

Compared to the IL-2 variant, which was armed with 37-mm air guns, the Su-6 firing rate was significantly higher. This was due to the fact that the Su-6 guns were located much closer to the center of the aircraft. "Peck" when shooting, as it was on the IL-2, almost not felt. It was also possible to fire from a single gun. The plane deployed, but not so much. Such powerful weapons significantly increased the ability to combat armored targets.

At the state tests, the double Su-6 aircraft was highly appreciated, and in conclusion, according to the KA Air Force report, it raises the question of introducing the aircraft into the series.
Comparative data of the Su-6 and Il-2 aircraft are as follows:
The speed at the ground at Su-6 is more on 107 km / h, than at Il-2
The speed at the height of 4000 m more on 146 km / h than the IL-2
Practical ceiling more on 2500 m than IL-2
Flight range more on 353 km than IL-2

Su-6 with excellent maneuverability and speed indicators, could be successfully used to fight the enemy bombers and transport aircraft. For fighters, it also turned out to be a very difficult goal. This was confirmed in the 1944 year in trial air battles with the Yak-3 fighter.

By the time of the creation of the two-seat Su-6, the Air Force specialists already had a large amount of statistical data to analyze the causes of the loss of aircraft for various purposes, including attack aircraft. In the conclusions of the report of the 2nd Division of the Operations Directorate of the Air Force headquarters for loss analysis aviation (August 1943) it was noted that of all the flight performance, it is maneuverability that has a decisive influence on combat survivability when operating on ground targets. Similar requirements were put forward by specialists of the Air Force Research Institute. They paid special attention to the horizontal and vertical maneuverability of a promising attack aircraft, equipping it with an air-cooled engine, as well as increasing the effectiveness of armor protection while reducing the share of armor in flight weight.

The leadership of the Air Force believed that the Su-6 was the machine that Soviet aviation lacked. In his opinion, the NCAP had opportunities for the production of a series of M-71F engine and Su-6 aircraft.
The production of M-71F engines and Su-6 attack aircraft could be adjusted to existing capacities by reducing the production of M-82F and M-82FN engines and Il-2 attack aircraft. This could not greatly affect the overall situation at the front. In the rear (in the internal districts, in the Far East, in schools, at storage bases, etc.) a considerable reserve of combat vehicles has accumulated - about 20% more than in the army, and at the front there was an almost threefold superiority in forces Luftwaffe. The number of aircraft released at that time significantly exceeded the number of trained pilots for them.

Given the high performance of the Su-6 in the design bureau designed high-altitude fighter.
After dismantling the armor, part of the weapons and defensive installation, the new aircraft was supposed to have excellent flight data.

Serial production of the M-71F would solve the question not only about launching the Su-6 attack aircraft into the series, but also about the production of the I-185 advanced fighter. In this case, there would be a situation where both strike and fighter aircraft were simultaneously re-equipped with equipment that is superior to the enemy’s in all defining parameters, which would most favorably affect the general course of the war. Meanwhile, the NKAP strongly resisted staging of the Su-6 series and the M-71F engine, motivating their position with a great technical risk when deploying their mass production in wartime conditions. However, it seems that it was not only that. Having relied on quantity, not quality, the leadership of the People's Commissariat was terribly afraid to make any more or less serious changes to the already streamlined production system for combat aircraft. In addition, agreeing with the proposal of the military, he would have to actually recognize the fallacy of the adopted technical policy of the NKAP, starting with 1940.

Due to the lack of suitable engines, Su-6 variants with M-82 and AM-42 engines were tested.
With an air-cooled engine M-82 with power 1700 hp Su-6 showed on tests higher characteristics than IL-2, but not as significant as with M-71-F.

The installation on the attack aircraft of the AM-42 fluid engine P.O. Sukhoi considered it a “step back,” as he repeatedly stated. However, such a plane was built and tested. Due to the unreliable performance of the propulsion system, the tests were delayed. By the time they graduated, an Il-10 attack aircraft with a similar engine was launched into mass production, and the relevance of this topic was lost. 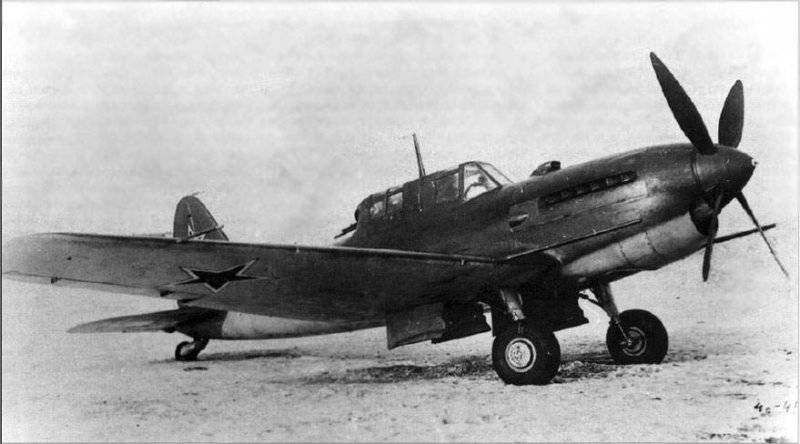 The main reason for the refusal of mass production was the lack of production of the M-71 engine, under which it was originally developed. Su-6 had excellent data for its time, and without a doubt, if adopted, it would have quickly surpassed the illustrious IL-2. This plane would remain effective in the first postwar decade. Unfortunately this did not happen.

As a "consolation prize" for the creation of a two-seater attack aircraft SU-6 M-71F chief designer P.O. Sukhoi was awarded the State Prize 1 degree, which he transferred to the Defense Fund. But the high reward only "sweetened the pill."