“The Millennium Scam” is over: the last batch of our uranium went overseas 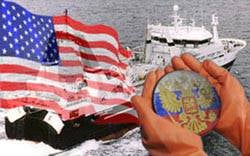 
Almost no Russian media has paid attention to an event that happened at the end of last week. From the port of St. Petersburg on a trip across the Atlantic went merchant ship Atlantic Navigator. On board the vessel are containers with Russian uranium.

"Deal of Mountain - Chernomyrdin": the true goals of our American "partners"

It was the last batch of uranium, which was sent to the United States on the basis of the Russian-American agreement concluded 20 years ago, providing for the supply to America of 500 metric tons of uranium, which Russia pledged to extract from its nuclear weapons and which America intended to use as fuel for the operation of nuclear power plants.

The 1990s were quite actively talking about this uranium transaction, but today this topic has been "behind the scenes" of discussing the key problems of our life. And the younger generation simply did not hear anything about it. Therefore, we need to remind her history. Immediately, I note that this is not an ordinary trade and economic transaction, beneficial for both parties. This is an act of Russia's largest robbery, not only in its recent history, but also in the entire history of the country. Russia lost the Cold War to the West, above all to the United States. Lost to a large extent due to the treacherous policy of our leaders. The same leaders continued to pass the country in the 1990s. "Uranium Deal" - the consent of our treacherous elite to pay tribute to the winner in the form of weapons-grade uranium. The principal agreement on this was reached between the then Prime Minister of the Russian Federation V.S. Chernomyrdin and US Vice-President A. Gore, so this deal is often called the Gore-Chernomyrdin deal. It is also called the “Millennium Scam” because of its unprecedented scale. In fact, it was the operation of the West, which solved several strategic objectives at once:

a) unilateral nuclear disarmament of Russia by depriving it of weapons-grade uranium reserves, as well as preparing the conditions for the United States to withdraw from the ABM Treaty;

b) causing enormous economic damage to Russia (the accumulated stockpile of weapons-grade plutonium was a significant part of the national wealth of Russia at that time);

c) depriving Russia of colossal energy sources in the future after the planned introduction of a new thorium nuclear power technology.

The scale of the robbery of Russia

The “scam of the millennium” was dubbed the deal because, firstly, it was of enormous proportions, and secondly, it was fraudulently concluded. Many Russian and American media sought to present it as an ordinary commercial agreement. The total transaction amount for the supply of 500 tons of uranium was determined to 11,9 billion dollars. Meanwhile, the cost of the specified volume of highly enriched uranium is incomparably higher. To produce such a volume of weapons-grade uranium, several hundred thousand people worked in the mining and defense industries of the country for about 40 years. Production is dangerous, tens of thousands of people have lost their health and ability to work, shortened their lives. These were tremendous sacrifices in order to forge the country's nuclear shield and ensure a peaceful peaceful life of the USSR and the countries of the socialist camp. This uranium ensured military-strategic parity in the world, which sharply reduced the risk of a world war. On the other hand, in the American media there are such estimates: at the expense of Russian uranium, at the beginning of this century, 50% of electricity was produced at US nuclear power plants. Every tenth kilowatt-hour of electricity in the entire American economy was provided by uranium from Russia. According to estimates that were made by specialists at the end of the last century, the real cost of 500 tons of weapons-grade plutonium was at least 8 trillions of dollars at that time. For comparison, we note that the average annual value of Russia's annual GDP, according to Rosstat, in the last decade of the last century was in the 400 region of billions of dollars. It turns out that the actual price of the uranium transaction was only 0,15% relative to the minimum real value of the goods. The real value of uranium turned out to be equivalent to the country's 20 (twenty) annual GDP!

There were many wars in the history of mankind. After them, the vanquished often paid reparations and indemnities to the winners. Recall, for example, the Franco-Prussian 1871 War of the Year. The “Iron Chancellor” Bismarck appointed a contribution to the defeated France in approximately 13% of GDP (5 billion francs). Probably the largest indemnity in recent history was paid by the defeated Germany in the First World War. The media reports that Germany only three years ago finished paying reparations under the terms of the 1919 Paris Peace Treaty of the year. Reparations were imposed on Germany in the amount of 269 billion gold marks. The amount, of course, is huge: it is equivalent to about 100 000 tons of gold. At the current price of the yellow metal is obtained about 4 trillions of dollars. Experts in the field of economic history claim that the reparations appointed by Germany in Paris were about twice the GDP of the then Germany. By the way, reparations payments by Germany stretched for 90 years (intermittently, payments were made for about 70 years in pure form); the payment of the "uranium reparations" by Russia was packed in 20 years, and most of the uranium was supplied to the USA in the 1990s.

It is early to put an end to history

"Uranium transaction" was made in complete secrecy from the people. Even many “people's representatives” were not aware of it - for the reason that, in violation of Russian legislation, it did not go through the ratification procedure in our parliament. In the second half of 1990, a number of deputies launched an investigation to ascertain the terms of the transaction, the circumstances of its conclusion, and the assessment of compliance with the Constitution of the Russian Federation and other regulatory acts of Russia. As a result of the strong pressure of certain influential forces from the environment of the then President of the country B.N. Yeltsin failed to investigate. Many of our other politicians tried to sort out the deal, and even sought to denounce the agreement on the supply of uranium to the United States. Among them, for example, the legendary General L. Rokhlin, the Prosecutor General Y. Skuratov, the deputy of the State Duma V. Ilyukhin. Many attribute the death of Rokhlin and the resignation of Skuratov precisely to the fact that they were excessively active in the investigation of the “uranium transaction”.

Even if the supply of uranium within the framework of the Gore-Chernomyrdin transaction is completed, this does not mean that the end should be put on history. It is necessary to return to the most serious analysis and investigation of the transaction within the framework of a special interdepartmental commission with the participation of nuclear industry experts, people's representatives (deputies of the State Duma), law enforcement officers, the Foreign Ministry, the Ministry of Defense, other departments and organizations, independent experts in technical, military, legal and economic issues.

Firstly, there are suspicions that a number of individuals involved in the transaction still remain in the "holder" of current politicians and government officials. There is no guarantee that they will not continue to work in the interests of the United States and the West.

Secondly, we need a correct and honest understanding of our recent history. Without truthful disclosure of the details of the “uranium transaction” and its political, military, moral evaluation, there is no guarantee that we will not again step on such a rake. An analysis of the true goals of the American side of the transaction vividly highlights the true goals and interests of those whom, unfortunately, we continue to call “partners” by inertia.

Third, we need sound and detailed assessments of the economic damage caused by the transaction to Russia and its people. In any attempt by Russia to embark on the path of economic revival, the West will put a spoke in the wheels of our real reforms, social and economic transformations. We must be prepared for the fact that the West will increasingly issue us with all sorts of “bills” - for example, if we try to de-offshore our economy. Through the courts of the United States, Great Britain and other European countries, disagreements will inevitably begin on the part of the owners of offshore companies and / or their representatives with far-fetched claims for compensation for "damages." Approximately the same reaction can be expected if Russia decides to withdraw from the WTO, restrict foreign investment or even restrict the repatriation of foreign investors' profits from Russia. We must be prepared for the fact that it may be necessary to issue reciprocal "bills" to our Western "partners." The largest of all possible counter "bills" is our claims to the United States for the reimbursement of the gigantic damage inflicted on Russia by the "uranium transaction".

Ctrl Enter
Noticed oshЫbku Highlight text and press. Ctrl + Enter
We are
Ukraine: fantasies about “uranium independence” and the real degradation of the industryNuclear toroyanets to control Russia
206 comments
Information
Dear reader, to leave comments on the publication, you must to register.