Can Saudi Arabia get a nuclear bomb from Pakistan? 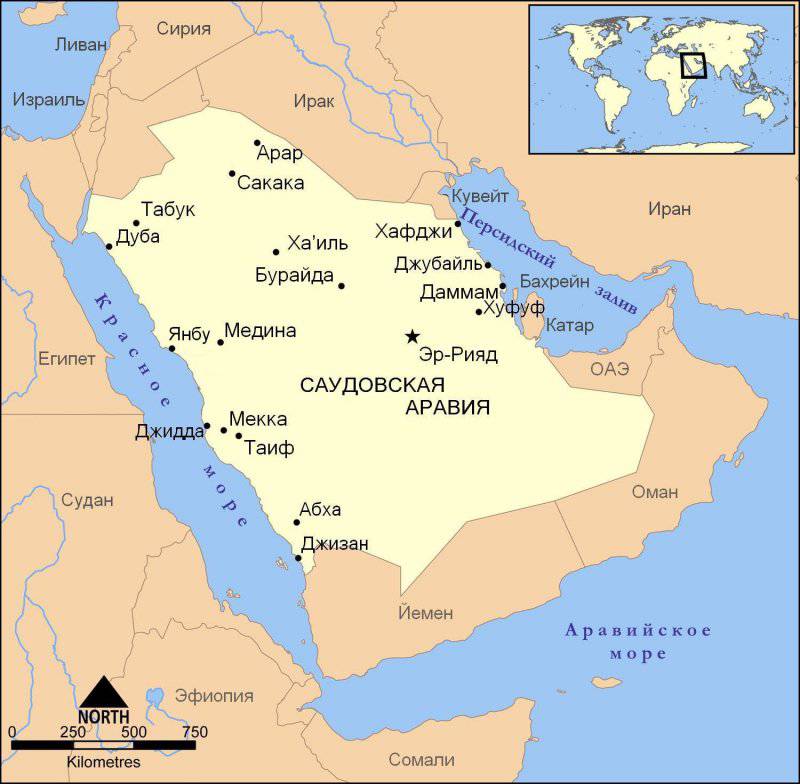 Recent reports that Pakistan is allegedly ready to transfer nuclear weapon Saudi Arabia, so did not scare anyone. Nobody just believed in them. In addition, the Pakistani government immediately denied the information transmitted by the BBC. However, this история - another reason to think about what is happening now in the Middle East and South Asia.

Conversations that Pakistan can transfer nuclear weapons to the “oil kingdom” from time to time arise and disappear just as well - until the next escalation of Saudi-Iranian rivalry. For example, in 2009, King Abdullah threatened that the kingdom would have nuclear weapons - if “Iran crosses the line”. The line, obviously, should be understood as the successful development of the Iranian nuclear program until Tehran has an atomic bomb.

The current situation for Riyadh is very worrying. On November 9, CNN, citing a high-ranking government official from Washington, reported that the United States and other countries are close to concluding a preliminary agreement with Iran on the Iranian nuclear program. It is expected that Tehran will suspend all actions within the framework of this program for six months - in exchange for the temporary cancellation of a number of Western sanctions. It is clear that any deal with Iran will be the strongest blow to Saudi Arabia, which for many years has funded the Pakistani nuclear program, wishing to create a counterweight to its main geopolitical rival. And even a hint of a possible warming in relations between Tehran and Washington in Riyadh is perceived with hostility. And the Saudis are ready to do everything possible to, if not disrupt the negotiations, then at least complicate them as much as possible. One way to achieve this is to convince Americans that rapprochement with Iran will inevitably lead to the proliferation of nuclear weapons in the Middle East.

Imagine that the Pakistani leadership, having forgotten about all their problems, will rush to transfer nuclear weapons to Saudi Arabia, is extremely difficult. There are several reasons for this. The charge of transferring an atomic bomb is an unpleasant thing in itself and fraught with consequences, but in this case we are talking about two very specific countries. On the one hand, they are the official allies of the United States in the war on terrorism. And on the other - almost the main supporting bases of the very terrorists with whom the war is going.

The Americans are already accusing some high-ranking representatives of the Pakistani army and special services of sympathizing and even direct support of the militants, and one can only imagine what will begin, think of the Pakistanis to transfer nuclear weapons to another problem country. We must not forget about Iran. Islamabad does not need problems with a strong neighbor, which, if desired, can create a serious headache.

For some time, most of the reports from Pakistan are related to the strikes of American drone drone aircraft, which tirelessly prey on militants in the Tribal Zone near the Pakistan-Afghanistan border. One of the latest successes of an unmanned war is the liquidation of Pakistani Taliban leader Khakimullah Mehsud in early November. It should also be recalled that several months ago the field commander Vali ur-Rahman, like Mehsud, who belonged to the Tehrik-e-Taliban grouping, was destroyed by an air strike.

According to field commanders they are firing not only from the air. A few days ago, in a suburb of Islamabad, a killer on a motorcycle shot Nasiruddin Haqqani, a financier and one of the leaders of the influential Haqqani clan, known since the war against Soviet troops in Afghanistan. It is believed that the sweep of the militant leaders is carried out on the eve of 2014, when the coalition troops must leave Afghanistan. The calculation is made by the fact that, having beaten commanders, the Americans will decapitate the Taliban on both sides of the border, and those left without financiers and coordinators will no longer be a danger to the regime in Kabul.

In principle, the elimination of militants of this level could allow the Pakistani leadership to take control of the tribal area and end up in a stateless area of ​​powerlessness. But in reality this will not happen. After all, the activity of American UAVs causes discontent among ordinary citizens, who view it as a gross violation of the sovereignty of the country, as well as many representatives of the political and military establishment sympathizing with the Taliban.

After the liquidation of Mehsud, public opinion in Pakistan split. Some believe that by destroying the leader of Tehreek-i-Taliban, the Americans thwarted the negotiations of the country's leadership with the Taliban, once again rudely intervened in the internal affairs of Pakistan. After all, not so long ago, Prime Minister Navaz Sharif allegedly mentioned that negotiations had begun, although representatives of Tehreek-i-Taliban claim that there were no contacts with representatives of the government.

According to another point of view, the Pakistani leadership, speaking verbally for a ban on the use of American drones, in fact supports air strikes. About this in late October, with reference to leaks from the CIA wrote the American Washington Post. The subject of the article was the visit of the Pakistani Prime Minister to the United States, which in Islamabad was called a failure (during a meeting with Barack Obama on October 23, Nawaz Sharif did not even manage to raise the topic of drones).

In any case, Pakistan, to put it mildly, remains a not very stable country with an economy balancing on the verge of complete bankruptcy. Even the fact that the ruling party - the Pakistan Muslim League - traditionally protects business interests, does not save the situation, and the current prime minister, Nawaz Sharif, is known as a supporter of the liberal economic model. In conditions when a part of the country's territory is controlled by the Taliban, who have influential patrons in power structures, one should not count on the economic revival of Pakistan.

Do not add optimism and the realities of domestic political life. The official policy of the Pakistan Muslim League towards the Taliban has always been rather amorphous and boiled down to periodic statements about the need for negotiations. Much more radical program of the main political rival of the party Nawaz Sharif - "Justice Movement" ("Tehrik-e-Insaf"). His representatives insist on the need for dialogue with the Taliban and the banning of flights of American UAVs. Most likely, the rivalry between the two parties will only escalate: after all, the Pakistan Muslim League will continue to pursue a cautious pro-American policy, and the Movement for Justice, in all likelihood, will rely on popular discontent.

Tehrik-e-Insaf is the ruling party in Khyber Pakhtunkhwa (the former North-West Frontier Province with the administrative center in the city of Peshawar). This region is predominantly populated by Pashtuns, many of whom are opposed to central government. By the way, the Minister of Justice of this province, Israrullah Gandapur, who died during the 16 terrorist attack in October, also belonged to the “Justice Movement” (the Minister received guests at his house on the occasion of Kurban Bayram when a suicide bomber launched a bomb).

It is worth noting that problems with militants have recently been characteristic not only of the north and west of Pakistan. There is also unrest in the southern port city of Karachi, the economic capital of the country. The positions of the ruling here Sindh Party Muttahida Qaumi (United National Movement) seriously shaken after the parliamentary elections of 11 in May. The victory of the Pakistan Muslim League meant that the Sindhi could no longer control the economy of more than 20-million port city, including its shadow part. Therefore, it is clear that immediately after the election, disgruntled supporters of Muttahida Qaumi opened fire on political opponents, and the leader of the movement in emigration, in an interview with Pakistani television, threatened acts of violence to anyone who would offend his party.

... In general, it should be recognized that the internal political situation in Pakistan is such that Saudi Arabia has nothing to rely on: it will not receive the atomic bomb. Not to the bomb now Islamabad. So the oil kingdom makes sense to look for new friends - for example, to build bridges with Israel, whose interests in the Middle East largely coincide with the interests of the Saudis. This is the latest headline in the Sunday Times from 17 November: "Saudi Arabia and Israel are developing plans to attack Iran." It sounds though unconvincing, but beautiful.

Ctrl Enter
Noticed oshЫbku Highlight text and press. Ctrl + Enter
We are
Iran in the Syrian conflict. The confrontation with Saudi Arabia and the interests of the ShiitesSaudi Arabia is preparing for a big war
19 comments
Information
Dear reader, to leave comments on the publication, you must to register.