Ruined modernization of the MiG-23 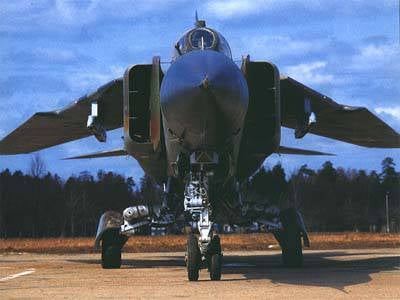 The global aviation industry provides for a program to modernize older aircraft in order to extend their service lives and save budget funds. As a result, the upgraded aircraft to a greater extent reveals its capabilities.


This article focuses on the Soviet fighter, which is far from fully unleashing its potential. Brand - MiG-23-98.

In the 1980's, the North Atlantic bloc strenuously re-equipped its wings with the new F-16, F-15 and F / A-18. Under these conditions, the Soviet Union needed to produce not only the new MiG-29 and Su-27, but also to modernize the MiG-23ML / MLD, which adequately showed themselves in December 1982 in the sky of Syria, as well as in Afghanistan.

Before the appearance of the USSR MiG-29 and Su-27, only the third generation MiG-23MLD fighter could lead an equal battle with Western planes of the fourth generation. However, the collapse of the USSR ruined the program of large-scale modernization of the MiG-23.

However, despite the enormous difficulties and the almost complete lack of funding, in the middle of the 1990-s, the OKB Design Bureau. Mikoyan proposed several programs for the deep modernization of the MiG-23, in cooperation with JSC PhazotronNIIR and GosNIIAS, mainly aimed at export customers. It was necessary to equip the fighter with new types of weapons and advanced on-board electronics. Also, this issue has become relevant due to the expiration of the service life of the P-23 missiles, as well as the completion of the storage periods for the latest P-60 and P-24 missiles.

Initially it was supposed to replace the Sapphire-23 radar with Super-Spear, but later it was decided to install a more modern Mosquito-23 or Mosquito-21K. In total, three basic modification versions were developed:

2. Installation of the radar "Mosquito-21K" (target detection range in the forward hemisphere - 45 km, in the rear - 20 km) in the outboard container in addition to the standard station "Sapphire-23". As a result, without a serious rearrangement, the aircraft gets the opportunity to carry the same weapons as in the first version (but with a shorter range of the missile combat).

3. Preservation of the Sapphire-23 full-time station and installation of a radio correction in the forward part of the channel ensuring the use of P-77 medium-range missiles. The composition of the weapons planned to introduce a rocket melee P-73.

Considered also the option of installing the radar "Topaz". At the same time, a modernized machine would have almost equal opportunities with the MiG-29CMT for conducting missile air combat outside visual contact with the enemy, as well as for actions against land and sea targets. The use of suspended containers with fiber optic equipment made it possible to introduce X-25ML, X-29L, C-25L and CAB-500L bombs into the missile system with laser-guided missiles. At the request of the customer it is possible to equip the fighter with a controlled one. weapons foreign production.

As the main options offered:
• reduced visibility;
• installation of a quantum optical location station (COLS) with the MiG-29;
• the use of a diverse range of containers, expanding the tactical capabilities of the aircraft;
• refueling in the air;
• increase combat survivability;

The design of the MiG-23-98, basically corresponds to the base plane. The “combat” sweep angle of the wing consoles has been reduced from 45 to 33 °. An automatically deflected wing toe is applied. To improve visibility from the cockpit, a new visor of the type MiG-21-93 was installed. The information field is built on multifunctional LCD displays MFI-68 (used on the MiG-29CMT). The navigation equipment includes the GLONASS / GPS satellite system.

Modernization of the MiG-23 aircraft for many countries could be a good alternative to the purchase of improved, but expensive, fourth-generation Western-made aircraft. At one time, it would also be possible to modernize and supply for export aircraft of the Russian Air Force, which are in conservation.

It must be admitted that the MiG-23 was already outdated by the middle of the 1980-s, and it was hard for him to fight the more modern F-15 and F-16 during the battles in Lebanon 1982 of the year and operation "Desert Storm" of 1991 of the year. However, here the USSR did not exhaust all the possibilities. And if история Russia would have gone differently, not Gorbachev-style, our designers could dramatically strengthen these aircraft, saving money for the country.

As a result, four thousand Soviet MiG-23 turned into, as it were, eight thousand power strikes. And at the same time, we would enter the world market for the modernization of our aircraft around the world, bringing the country billions of dollars through lucrative contracts. And the new plans for re-equipment and re-equipment of the Russian Air Force remain on paper ...

Ctrl Enter
Noticed oshЫbku Highlight text and press. Ctrl + Enter
We are
An-12 in AfghanistanMiG-23 fighters in Afghanistan
62 comments
Information
Dear reader, to leave comments on the publication, you must to register.