Was Lenin a German spy? 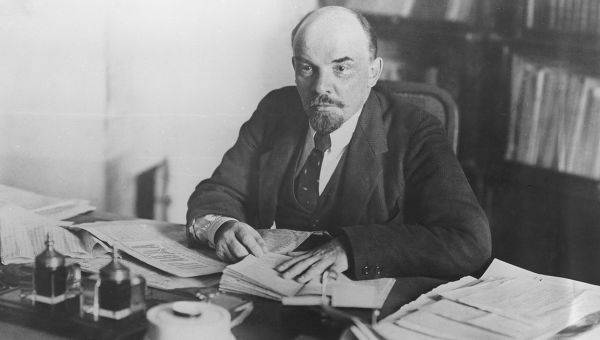 After writing the book “Stalin. We remember together. ”I began to very often ask questions ... about Lenin.

Including a similar question asked by the newspaper “Arguments and Facts” as part of its new special project “100 of the main issues of Russia”. The question about Vladimir Ilyich turned out to be №68.

Here is my answer.

“A spy or agent is a person who, for money, performs the task of reconnaissance of another state and realizes that it brings an unconditional benefit to this state. In this sense, Lenin was never a spy.

Vladimir Lenin never carried out any conscious actions that were supposed to benefit only another state. He was not in the service of foreign intelligence services. There is not a single document confirming that Lenin received at least some money from the Germans. No one! However, there is a document confirming that another well-known Russian revolutionary Alexander Parvus received money from Germany: a million rubles to organize a strike in 1916.

But let us formulate the question differently: did Vladimir Ilyich cooperate with foreign intelligence services?

Of course. Only this was cooperation solely for the sake of the victory of the ideas of the socialist revolution. He accepted some support not to help Germany, but to help Russia, as he understood it. The Germans, as well as the British or the Provisional Government, he took advantage of.

In a sense, Lenin and the Germans in 1917 were the beginning of 1918, they were tactical allies. In the spring of 1917, the Germans allowed the train with Lenin and other political émigrés to go to Russia at war with them, so that when they returned to their homeland, the Bolsheviks began to decompose the army there. But then their interests began to diverge. And immediately after the revolution in Germany, in November 1918, Lenin ordered to launch an offensive on those territories which, according to the Brest peace, he himself had given to the Germans. The time of their union is over. "

Some time ago “AIF” published other material with my opinion on this topic. I think that he will be very helpful here.

“Agents of the revolution. Would Vladimir Lenin be a spy for Germany?

Vladimir Lenin's journey with a group of comrades in a “sealed train” from quiet and well-fed Switzerland through Germany to revolutionary Russia, which happened exactly 95 years ago, gave rise to rumors that Ilyich was a German spy.

This trip changed the course of the world stories, still raises many questions. And the main one: who helped Ilyich return to his homeland? In the spring of 1917, Germany was at war with Russia, and throwing a handful of Bolsheviks at the heart of the enemy, who were preaching the defeat of their government in the imperialist war, was to the advantage of the Germans. But not everything is so simple, the writer, historian Nikolai Starikov, the author of the books “Chaos and Revolutions - weapon dollars "," 1917. The solution of the "Russian" revolution "and others.

- If Lenin were a German spy, he would immediately begin to seek a return to Petrograd through Germany. And, of course, I would immediately receive a welcome. But things were different. Recall that little Switzerland, where Ilyich lived at the time, was surrounded by France, Italy, Germany and Austria-Hungary, who were locked in a mortal combat.

There were two options to leave her: through the country - a member of the Entente or through the territory of her opponents. Lenin initially chooses the first. Inessa Armand 5 (18) of March (hereinafter the date in brackets indicates the new style. - Ed.) Receives the following telegram from him: “Dear friend! .. We dream everything about the trip ... I would really like to give you an order in England to find out quiet and true, could i drive through. Shake your hand. Your V. W. ". Between 2 (15) and 6 (19) in March 1917, Lenin telegraphs his fellow Ganetsky in Stockholm, setting out a different plan: drive to Russia under the guise of ... a deaf-mute Swede. And 6 of March, in a letter to V. A. Karpinsky, suggests: “Take the papers in your name to travel to France and England, and I will pass through them through England (and Holland) to Russia. I can wear a wig. ”

For the first time, the mention of Germany as a route appears in the telegram of Ilyich Karpinsky 7 (20) of March - on the 4-th day of the search for options. But soon he confessed in a letter to I. Armand: “It does not come out through Germany”. Isn't all this strange? Vladimir Ilyich cannot agree with the "accomplices" -Germans about the passage through their territory and for a long time invents workarounds: either go "quietly" through England, or in a wig with other people's documents - through France, or pretend to be a deaf-mute Swede ...

I am convinced that if by that time there were some secret agreements between Lenin and the German authorities, they are very vague. Otherwise, it would have been difficult to deliver it to Russia initially. The Germans did not expect a successful February coup, did not expect any revolution at all! Because, apparently, they did not prepare any revolution. And who was preparing February 1917? For me, the answer is obvious: the Western "allies" of Russia in the Entente. It was their agents who brought the workers and then the soldiers to the streets of Petrograd, and the English and French ambassadors supervised these events. Everything happened unexpectedly, not only for the Germans, but also for the Bolsheviks. For February, Lenin and his comrades were not necessary, the "Allied" special services were able to organize workers' unrest and soldier riot without their help. But, in order to bring the revolutionary process to the end (that is, the collapse of Russia, which would completely subordinate it to the will of the Atlantic powers), fresh Lenin yeast was required to be thrown into the cauldron.

There is every reason to believe that in March of 1917, it was “allied” intelligence in separate negotiations with the Germans that convinced them not to hinder the passage of the Russian Bolsheviks (that is, representatives of an enemy country who, under the law of wartime, should have been arrested and locked up until the end of the war). And the Germans agreed.

General Erich Ludendorff wrote in his memoirs: “By sending Lenin to Russia, our government assumed a special responsibility. From a military point of view, his journey through Germany had its justification: Russia had to fall into the abyss. ” Learning pleasant newsLenin rejoices. “You may say that the Germans will not give the car.

Let's wager to keep what they give! ”He writes 19 March (1 April) to Inessa Armand. And then - to her: “We have more money for the trip than I thought ... our comrades in Stockholm helped us a lot.” 2 weeks passed between the two messages of the beloved (“through Germany does not come out” and “will give”), and during this time the United States, Britain and Germany decided the fate of Russia. The necessary money (indirectly, through the same Germans and Swedes) was given to the Russian radicals by the Americans, and the British provided non-intervention by the Provisional Government under their control. In Stockholm, where Lenin and his companions arrived after a long journey by train in Germany and then by ferry to Sweden, they received a group visa to Russia in the Russian consulate general. Moreover, the Provisional Government even paid them tickets from Stockholm to their home! At the Finnish railway station in Petrograd, 3 (16), April, revolutionaries were greeted by an honor guard. Lenin made a speech that he ended with the words: “Long live the socialist revolution!” But the new government of Russia did not even think of arresting him ...

Bucks in his bosom

In the same March days, another fiery revolutionary, Leo Trotsky (Bronstein), gathered at his homeland from the USA. Like Vladimir Ilyich, Lev Davidovich received all documents from the Russian consul in New York. 14 (27) March Trotsky with his family departed from New York on the steamer “Christianiafiord”. True, on arrival in Canada, he and several of his comrades briefly removed from the flight. But soon they were allowed to continue on their way - at the request of the Foreign Minister of the Provisional Government, Pavel Milyukov. Amazing request? Not at all, given that Milyukov is a personal friend of Jacob Schiff, an American magnate, the "general sponsor" of several Russian revolutions. During the arrest, by the way, it turned out that Trotsky was a US citizen traveling on a British transit visa and a visa to enter Russia.

And when it was discovered 10 thousand dollars - a huge sum for those times, which he would hardly have earned with fees for newspaper articles alone. But if it was the money for the Russian revolution, then only a tiny fraction of it. Major sums from American bankers were transferred to the necessary accounts of verified people. For Schiff and other US financiers, this was nothing new. They allocated funds to the Social Revolutionaries and Social Democrats in 1905, they also helped those who prepared February. Now is the time to help the most "frostbitten" revolutionaries. By the way, in the case of Trotsky, this help was almost a family affair: the wife of Lev Davidovich, nee Sedov, was the daughter of the rich banker Zhivotovsky - the companion of the bankers Warburg, and those in turn were companions and relatives of Jacob Schiff. ”

Ctrl Enter
Noticed oshЫbku Highlight text and press. Ctrl + Enter
We are
The development of the military-industrial complex of the Russian Empire in the years of WWIMyths of the Great Patriotic. Did Stalin have prostration in the first days of the war?
330 comments
Information
Dear reader, to leave comments on the publication, you must to register.