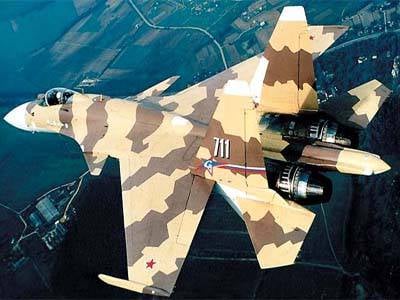 In the late 1990s, fighter aviation Russia was awaiting the adoption of a new super-fighter, which would have no equal in the world. Brand - Su-37.


Further modernization of the wings of NATO strongly demanded retaliatory steps from the Russian leadership. Despite the severe economic crisis, OKB im. Sukhoi proposed a new Su-37, which would be ahead of its Western counterparts by 15-20 years. In addition, it became clear that the design of the Su-27 laid tremendous opportunities for modernization that needed to be used.

The new multi-role fighter for the first time flew into the air on April 2 1996 of the year, which showed a unique combat capabilities. However, the collapse of the army and chronic underfunding led to the death of the project.

Compared with Western fighters, as well as with the MiG-29 and Su-27, the Su-37 had NEW OPPORTUNITIES: quickly change the orientation of the fuselage to angles up to 180 ° and hold it in this position for the time needed to launch a rocket.

The absence of restrictions on the angles of attack and the appearance of a significant increase in lift in unsteady flow caused by large angular velocities of pitch also contributed to the emergence of new types of maneuver for a fighter:
• a turn in the plane of symmetry on 360 ° (“Frolov Chakra”);
• forced (for a time shorter than 10 seconds) combat reversal;
• turning on the vertical;
• “cobras” with attack angles 150-180 °;
• coup on the "bell";
• coup with a loss of height up to 300-400 m.

When performing a cobra, the Su-37 reaches the angle of attack of more than 150 ° and is in that position for 3-4 seconds, after which it takes the position set by the pilot that is most beneficial during air combat. Su-37's super-maneuverability gives it superiority in close air combat over an enemy that does not possess such capabilities.

Compared with its predecessors, the Su-37 possessed:
• best flight and tactical characteristics;
• the possibility of delivering a preemptive strike on any air enemy, including the "inconspicuous";
• multi-channel and algorithmic security of all information and sighting systems;
• the possibility of attacking ground targets without entering the enemy air defense zone;
• the ability to perform low-altitude flight;
• the ability to perform automated actions in the group on aerial and ground targets;
• the availability of means to counter enemy electronic and opto-electronic means;
• the ability to automate all stages and modes of flight and combat use.

A smaller (compared to Su-27) flight range without air refueling (3880 km) is associated with the use of the Su-37 new multifunctional on-board armament control complex, an integrated flight control system with an automatically deflected thrust vector of the radioelectronic and optical interference.

The on-board electronics of the aircraft included systems using elements of artificial intelligence and provided proactive damage to airborne targets (including subtle ones) at distances guaranteeing the possibility of an enemy's retaliatory strike.

All flight stages were automated, including combat use of airborne targets, attacks of ground targets without entering the enemy’s air defense zone, counteraction from radio and optoelectronic EW facilities. There is an automatic target designation for actions on both aerial and ground targets.

Su-37 is equipped with a complex that includes a pulse-Doppler radar with a fixed phased antenna array and a rearview radar. The advanced optoelectronic sighting system of the fighter includes a thermal imager combined with a laser range finder-target indicator. Detection, recognition and automatic tracking of 20 air targets at a long distance and simultaneous attack of eight of them are provided at the same time. Optical-location system combined with radar and advanced helmet-sight pilot in a single complex. The aircraft is equipped with the equipment of an automated protected data exchange system about targets, which allows better coordination of the actions of several fighters engaged in group combat. The defense complex includes optical sensors for warning about attacking enemy missiles, a new generation of electronic reconnaissance station, active suppression systems operating in the optical and radar ranges, as well as means for setting passive radar and infrared interference.

One cannot but agree with the content of the article “F-22 vs. Su-37” (“Military Review”, 4 June 2010), where NATO generals gave a high rating to Su-37: “While F-15, as, by the way, their F-16 and F-18 “relatives” are deployed to the target, “hooking” half the sky with their wings, Russian planes are spinning around their tail and, having slightly added afterburner, they easily find themselves behind the “needle”, now in its lateral plane, then above by him. From such a position without a miss, it is very easy to deliver a “fatal blow” ... “Old American psychology does not allow to“ fight ”with Russian pilots - they suddenly lose again, then try to prove to the pilot that he can and must defeat the“ former probable opponent ”.
There is no such problem with Indians. Well, they lost and they lost, so they didn’t train well ... ”.

By creating “37”, Russian designers, with their engineering genius, were able to nullify the superiority of the West in “thin” electronics. Even the “smartest” missiles of Americans rush past an airplane that suddenly hangs in the sky, or swoops through its tail (see M. Kalashnikov’s book, The Broken Sword of the Empire, M., 2002, p. 107).

The massive rearmament of the air regiments and divisions of the air force by the “Russian Terminators” would immediately cool the aggressive impudence of NATO, and NO ONE WEST WITHOUT GROWING RUSSIA!

If we imagine that there would be hundreds of Su-37's in service with the Russian Air Force - the West would LITERALLY FEAR AWAY FROM FEAR, and in the event of a conflict, burn Eurofighter, Raphal and Raptor on the ground! But Su-37 suffered a sad fate - everything was decided by a dirty policy ...

Ctrl Enter
Noticed oshЫbku Highlight text and press. Ctrl + Enter
We are
MiG-23 fighters in AfghanistanMiG-21 in Afghanistan
71 comment
Information
Dear reader, to leave comments on the publication, you must to register.