Russians are not ready to serve in the army, but they believe in it.

March 9 2011
4
Attitudes toward the army and military service are becoming increasingly positive in our country: increasingly, our citizens say that the Russian military cause them a sense of pride and respect. Over the past ten years, the number of Russians, who believe in the ability of the Russian army to resist the military threat from outside, has practically not changed. However, with all this, the majority of our fellow citizens still do not want any of their relatives or loved ones to do military service in our army.

The data obtained by the leading sociological centers of the country on the attitude of our citizens to military service have some discrepancies. Some of them speak about a certain deterioration of the situation, others, on the contrary, about a significant increase in positive moods. All sociologists agree that the Russians perceive with understanding the need for universal conscription, and widespread hazing in the army is gradually decreasing.

Studies show that the Russian army is mainly respected by our fellow citizens. According to VTsIOM (All-Russian Center for the Study of Public Opinion), the number of citizens respecting the military and the army has noticeably grown. So, if back in 2008, 29% of respondents responded with respect for the RF Armed Forces, in 2010 their number reached 35%. According to the latest polls, 10% of Russians feel trust in the Russian military, and 5% also admire people who have chosen such a profession.

27% of respondents treat the army negatively. In particular, 12% of them are disappointed with our army, 8% treat it with disbelief, 4% look at it skeptically, 3% simply condemn its actions. “A positive attitude towards the army is more characteristic of people of the age: it is in this group that there are those who speak of pride and respect,” says VTsIOM specialist Stepan Lvov (head of the department for social and political research). But distrust is most common among young people .

The data obtained by the Public Opinion Foundation also indicate that the image of the Russian army is improving. While in 2007, only 18% of respondents spoke positively about it, in 2010, this figure rose to 27%. At the same time, the number of Russians who are negatively inclined toward the army has drastically decreased from 41% in 2007 to 30% in 2010. It is also curious that, according to the Public Opinion Foundation, there is a growing concern among citizens about what is happening with the armed forces. So, in 2007, improvements in the Russian army were noted by 31% of respondents, and already in 2010, this figure dropped to 25%. At the same time, the deterioration of the situation in the armed forces is now spoken by 16% people, whereas in 2007, they were 11%.

Russia is threatened from the outside

53% of citizens polled by Levada Center consider that for our country there is a real military threat from other states. It is significant that, since 2000, this figure has never dropped below 37%. The sensation of the military threat of our citizens increases during the exacerbation of various world confrontations, into which Russia is directly or even simply symbolically drawn. They were not so little. In 2000, it was about the war in Yugoslavia and Chechnya, in 2003 the war in Iraq, in 2004 there was a tragedy in Beslan, in 2008 there was military action in the South Caucasus. In addition, a special role was played by the US plans to deploy missile defense elements in Europe and the expansion of NATO to the east. 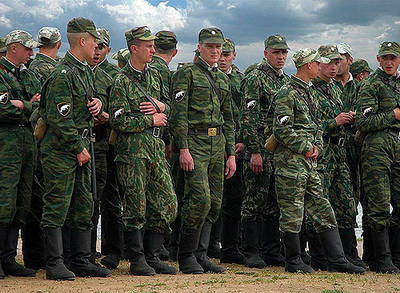 According to the Levada Center, our army will be able to repel an aggressor with no doubt 59% of respondents. At the same time, 28% believes that in the event of an invasion, the Russian military will have no chance of winning. The highest level of trust in the armed forces was noted in 2008-2009, when 73% of Russians believed in their fighting efficiency (they did not believe in just 17%). However, already in 2010, the level of trust began to decline. There is such a rule - the smaller the threat, the higher the combat capability is assessed - they gave explanations in the center.

VTsIOM cites some other data on this. So, in 2008, 83% of respondents believed in the combat capability of the army. In 2010, the question was not asked, but Stepan Lvov assumes that everything remained at the same level or even increased, because the positive attitude towards the military is growing.

Humorous entertainment website bestjoke.ru - anecdotes on any subject and every taste. There is something to cheer yourself up. A large collection, the regular addition of new anecdotes.

Against the background of Russians' confidence that the army will be able to cope with the aggressors, it is quite symbolic that the residents of the country are unwilling to do military service. According to the Levada Center, 41% of respondents are ready to find any opportunity not to go to serve. At the same time, 46% agree that their relatives and close ones serve Russia a little. 13% just found it difficult to answer the question - go serve or not.

“If we look at the long-term perspective, then the views of the respondents regarding emergency service change a little - this is directly related to various resonant events, be it история with Private Sychev or reduction of the service life by conscription. There is now a lot of criticism in the media about the Ministry of Defense and Minister Anatoly Serdyukov personally, "said sociologist Oleg Savelyev. The level of discontent with the minister and his ministry has increased somewhat lately. We think this is due to the end of the economic crisis when problems from the category of "where to earn it" and "what to eat" faded into the background. At the first plan came various imperial themes. People are starting to think more about things of national importance, including the armed forces.

54% of respondents would not want their loved ones to do military service; only 36% of respondents reacted positively to this question. Opinions about the need for universal military service in Russia were divided equally. 47% are waiting for the transition of the army to a contract basis and as many are in favor of maintaining the draft. Oddly enough, the number of those who fight for the contract army over the years has only decreased: for example, in the 2002 year there were 64%, and now only 47% is recruited.

The main problem of the modern Russian army, people still consider hazing and hazing. According to VTsIOM, this is indicated by 33% of respondents.

Over the past 10 years, top reasons for evading military service have changed significantly. According to tradition, hazing takes the first place, but if in 2010, 29% of respondents were afraid of it, in 1998 there were 40%. At the same time, the humiliation of military personnel by commanders and officers has been maintained at the same level for over a decade - 15-20%. Another serious reason for refusal to serve is the possibility of receiving injuries and injuries during armed conflicts (23% of respondents are afraid to shed their blood).

Among the risk factors of the army service, Russians also distinguish harsh living conditions of the service - 14%, moral decay - 10%, high criminalization - 7%. Moreover, the years spent in the army, 5% of Russians are considered completely lost. At the same time, the government’s irresponsible policy towards the military began to be talked much less, now only 10%, in 1998 this figure was 35%.

Other problems of the armed forces are not so significant for people: 9% of respondents are worried about defensive capacity, 7% lack of discipline, 6 and 5% are not satisfied with the problem of training new personnel and poor living conditions, respectively. In fact, you can even talk about improving on almost all fronts, in 2006, the growth of negative was largely associated with the Sychev case, says Stepan Lvov. After this incident, the figures went up, probably played a role, and the statements of the officers themselves that it became much better for them to live, and the unpleasant story begins to forget.

Again, several other figures are given by Levada Center. According to their information, the number of those who believe that hazing exists in most military units is rapidly declining. In the 2011 year, 39% of respondents say this, whereas back in 2005 there were 50%. 13% is sure that hazing is everywhere, and that in most parts it is not there at all - 27%. The perception of the existence of bullying is likely to have been affected by a reduction in service life from two years to one year, according to experts at Levada Center.