Close to the ceiling. Russian arms sales are expected to stagnate 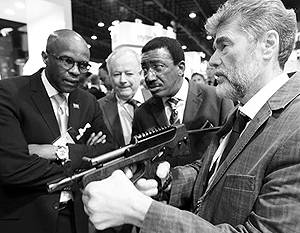 In the next three years, the export volume of Rosoboronexport Corporation will remain at the level of 2013, the state-owned company expects. Whereas in the last decade, its exports only grew from year to year, having increased fourfold. Meanwhile, global trade weapons, most likely, will continue to grow.


The Board of Directors of Rosoboronexport, which accounts for over 80% of Russian armaments and military equipment exports, approved the new development strategy of the company to 2020.

According to her, the volume of arms exports from 2013-th to 2016 year will remain at about 13 billion dollars a year, according to a statement of the state corporation Rostec, which includes Rosoboronexport. Thus, it seems that the export of Russian weapons reached the ceiling, at least for the near future.

This is all the more significant compared with the last decade, when the export of Russian military products only grew from year to year. From 2001 to 2012, Rosoboronexport increased its arms shipments in monetary terms almost four times. For example, in 2010, it was 8,7 billion dollars, in 2011 year - 10,7 billion dollars, and in 2012 year - already 12,9 billion dollars.

According to the results of 2013, Rosoboronexport plans to supply overseas military products by 13 billion dollars, the export volumes of helicopters will increase by 20% and the company expects 30% exports of air defense equipment.

Rosoboronexport explains the export forecast for the next three years by the situation on the world market. “We monitor all markets fully, study the needs for combat, helicopter, aircraft, armored vehicles in different countries and understand their development trends. The global market is changing, but there will be no drastic changes. Therefore, we assume that, most likely, a breakthrough (export of Russian weapons - approx. LOOK) in these years will not happen. We do not say that there will be a decline, but we cannot even say that there will be an increase (of exports). But this is a strategy. It can be adjusted and refined as our plans are fulfilled in this and next years, ”said Rosoboronexport spokesman Vyacheslav Davydenko to the VIEW newspaper.

Meanwhile, Rosoboronexport CEO Anatoly Isaikin said on Friday that one of the main goals of the new strategy is to expand the geography of supplies and the list of services. The company intends to expand its participation in international cooperation in the development, production and sale of military products. To this end, it is proposed to transfer to head organizations of Rostec corporation holding companies the right to directly provide after-sales service of military equipment supplied to foreign customers. # {Weapon}

According to Isaikin, the strategy also provides for "strengthening ties with defense industry enterprises, including the intensification of research and development work on the creation of new types of weapons, the development of programs for the modernization and disposal of weapons supplied earlier."

"No one has guarantees"

Experts say that finding new markets for weapons exports in Russia will not be so easy.

“There are no new countries where we can go. In Africa, you can enter many markets, but there are all beggars - they have demand, but there is no money, ”Alexander Khramchikhin, head of the analytical department of the Institute for Political and Military Analysis, told the newspaper VIEW.

“Due to the expansion of services, expansion of supply, we can certainly not increase the volume of exports in the next three years. This is a perspective for a decade, ”adds the expert.

“No one can ever guarantee that arms exports will grow, because the market is highly competitive, where new suppliers constantly come,” said Khramchikhin.

However, Khramchikhin points out possible problems with the export of Russian weapons and to traditional Russian markets.

“India has big complaints about the quality of our products, although it is our main customer. Venezuela, I think, will soon become completely uncompetitive, because the current president of the country has completely lost touch with reality, a financial collapse and a change of government can occur. And the new president will certainly not be our client. Algeria has already bought so much that it no longer needs it, ”says Khramchikhin.

“I would not say that we have established former ties with China. Since 2007, the volume of deliveries of Russian weapons to this country has dropped significantly. And our exports will never be restored to the previous level, ”the expert believes.

“Vietnam is a relatively constant and large client of ours, and I do not see any particular problems in this market. But all the others are already purchasing significantly smaller volumes of our military products, ”adds Khramchikhin.

“The growth rate of profits from the sale of domestic armaments is gradually decreasing,” confirms Ivan Andrievsky, first vice president of the Russian public organization Russian Union of Engineers, to the newspaper VIEW. “This is due to the unfavorable economic situation, the sanctions of the international community to the countries that actively acquired Russian weapons, and the difficult process of finding potential customers.”

“However, a number of Russian developments have no analogues in the world, and in this capacity is, for example, the most advanced fourth-generation fighter Su-35. Soon it is also planned to supply abroad new types of helicopters Mi-17, Mi-38 and Ka-62, ”says Andrievsky about the merits of Rosoboronexport.

Now Rosoboronexport supplies products to 70 countries of the world. The main importers of Russian weapons and military equipment are developing countries, and the main importer at the moment is India. “About 40% of supply falls to the countries of Southeast Asia and the Asia-Pacific region. Near and Middle East, North Africa exports more than 20% of the total, Latin American countries - 18%. And this is not counting services, ”says Ivan Andrievsky.

In turn, the deputy head of the Center for Analysis of Strategies and Technologies, Konstantin Makienko, believes that Rosoboronexport makes its forecast in terms of exports, based on the existing volume of orders for 38 billion dollars. In other words, excluding the emergence of new contracts. At the same time, according to him, there was no such thing that the company did not contract anything at all. That is, the forecast is extremely conservative, and it can be expected that real results will be higher.

Meanwhile, according to Makienko, strong growth in exports of Russian military products in quantitative terms was not observed in previous years. According to him, the growth was only nominal - in dollar terms.

Therefore, he doubts that supplies in iron will continue to grow, but he does not rule out that in nominal terms, exports may be higher than those indicated by Rosoboronexport 13 billion dollars. However, the reason here is not that the company will find new markets, but the fact that the dollar will continue to devalue, and product prices - to grow.

Meanwhile, according to Rosoboronexport, the global arms market has been growing by an average of 2000 – 3 billion dollars a year since 3,5. In 2008 – 2012, despite the crisis and the slowdown in the global economy, the global arms market increased by 30% to 73,5 billion dollars (IHS Jane's). Moreover, the boom in demand in eastern countries, in particular, the growth of exports from China and the sharply increased demand for weapons from countries such as India and Indonesia, contributed to this sharp jump in trade. More than 70% of military exports in recent years accounted for the top five countries: USA, Russia, France, Germany and the UK. Russia is now in second place in the world in terms of arms exports. However, the number of arms exporters is increasing, and competition between the main players is increasing. At the same time, over the past five years, 55% of the world's purchases of weapons accounted for only 13 countries.

By 2020, the global arms trade will double, and the demand for weapons will shift to the Asia-Pacific region, according to IHS Jane's. Therefore, the largest exporters of weapons should increase exports precisely to the east in order to maintain their sales.

Ctrl Enter
Noticed oshЫbku Highlight text and press. Ctrl + Enter
We are
List of destroyed the largest and most high-tech enterprisesHow can Russia survive and win in the 21st century?
19 comments
Information
Dear reader, to leave comments on the publication, you must to register.