The waves of migration just overwhelm Russia. In many cities in the central part of the country, the non-indigenous population in relation to the local residents has long exceeded the threshold determined by experts in 17 percent (after which, as is well known, riots and pogroms begin on interethnic grounds). And in some places even more than half of the titular nation of migrants. The question involuntarily arises: where do so many, for example, are Tajik? Let's stop only on this nationality. The population of Tajikistan, according to official data, is smaller than the population in Northern Palmyra alone. So where did they come from in Russia in such quantities today?

Let us recall the beginning of the 90-s, when the thesis on the free movement within the CIS of goods and services (of course, the labor force) was proclaimed. Since then, almost a quarter of a century has passed, and very little has been done to strengthen Russia's state borders with the former Soviet republics. In particular, the huge, thousands of kilometers long 7,5 border with Kazakhstan is practically not protected. The borders of Kazakhstan with Uzbekistan and Tajikistan are also not an insurmountable obstacle for potential violators (and do they exist in the old Soviet sense at all?). The last two states border Afghanistan. Are these frontiers protected accordingly? Are they locked up like in Soviet times, when, figuratively speaking, not a single bird dared to fly over the Amu Darya and Pyanj without the permission of the Soviet border guards? 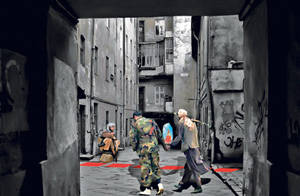 There is every reason to believe that the Tajik-Afghan border today is a large-mesh sieve for the free movement of peculiar goods (weapon and drugs), services and the population of border areas (and the green light is on, without switching, in both directions). Recall that the nationality "Afghan" no. In Afghanistan, there are Pashtuns, Tajiks, Uzbeks, Turkmen, Hazaras, Baluchi, etc. Now we will list some of the Afghan provinces bordering with Tajikistan (and partially with Uzbekistan): Faryab, Jowzjan, Balkh, Samangan, Kunduz, Takhar, Badakhshan. Just for example: Badakhshan - almost 90 percent of the population of this province are Tajiks, Takhar - more than 20 percent, Kunduz - almost 30 percent, Samangan - 40 percent, Balkh - 40 percent.

That is, on this and the other side of the Panj there are people of the same nationality. As you know, a Tajik will never shoot a Tajik. And it would be extremely rash to assume that an insurmountable wall was erected on the Tajik bank of the Panj for state border violators. Especially since the flow of Afghan heroin through Tajikistan, on the sale of which both the local population and the authorities earn money (why hide it) on both sides of Pyanj.

And now (only as a working hypothesis) suppose whether it is worth Afghan Tadzhik's great work to acquire the necessary documents, cross the border, take the Dushanbe-Moscow train, and after a few days quietly leave the car already in the capital of Russia, at Kazan Station? Paraphrasing the classics a little bit, one can say this: with the modern development of printing in the East, it is nothing to straighten out Tajik documents on Afghan territory. If in Central Asia they are engaged in counterfeiting Russian banknotes, then the passport of a citizen of Tajikistan and a local driver’s license for modern printing equipment, which is not difficult from the point of view of protection levels, is not a problem at all. One can only assume that this equipment in the cities - the provincial centers of Afghanistan, bordering Tajikistan (Faizabad, Talukan, Kunduz, Aibak, Meymene, Mazar-i-Sharif), works in three shifts. So, how many Afghan Tajiks wander on our territory is an open question. And then try to figure it out: is it a Tajik or a Hazara? Or maybe Pashtun? For Russians, they all look the same. To distinguish between them, you need a lot of experience.

Continuing the listing and characterization of state borders to the south-east of the Russian Federation, it should be noted that there are virtually no interstate boundaries between Afghanistan and Pakistan (the so-called Durand Line). It is not in nature, and especially nobody protects it. Afghan tribes from the southern provinces of the country migrate to Pakistan for the winter (and this has always been the case). That is, until the Arabian Sea there is no state border in its usual sense. And from the Pakistani port of Karachi you can easily get to Orenburg without special obstacles by hitchhiking (to the positional areas of our strategic rocket army closest to the borders).

For example, a Russian needs a visa and fingerprints to travel to Mexico. In order to cross the border of Malaysia, a visa is not needed. But you need a passport and fingerprints are taken at the border checkpoint. Practically anyone — the Taliban, the drug courier, the mujahid, representatives of various Pashtun tribes — Momandy, Shinwari, Khugiani, Giljai, etc. — can enter thousands of kilometers through the huge 7,5-wide gate across Russia. The main thing is to straighten out some simple Tajik documents.

The most curious thing in this matter is that on the way of this river of migrants in the near future from the Russian side is not even supposed to put at least some kind of dam. And this is a direct threat to national security. It remains only to clarify, again, in the words of a classic, is it a crime or, even worse, is it a mistake?

Ctrl Enter
Noticed oshЫbku Highlight text and press. Ctrl + Enter
We are
Tajikistan in the shadow of ChinaMissed chapter "Strategy-2020"
42 comments
Information
Dear reader, to leave comments on the publication, you must to register.