November 20 2013
15
In the first months of World War II, among the mass of Soviet infantrymen, it was often possible to meet soldiers dressed in blue overalls who were armed with an unusual appearance with compact machine guns. These were the crews of lined, undermined or abandoned. tankswho continued to fight in the ranks of the infantry, removing from their combat vehicles tank machine guns DT (Degtyarev tank). The Red Army adopted the new DT tank machine gun in service in 1929 under the designation 7,62-mm tank machine gun of the Degtyarev system of the 1929 model (DT-29). It was a modification of the rather successful 7,62-mm machine gun of the Degtyarev system of the 1927 model (DP). The engineer G.S. Shpagin, young at that time, was engaged in the creation of his tank version, who took into account all the features of the installation of a machine gun in the close fighting compartment of an armored car or tank.


The need to create a specialized tank machine gun in the USSR arose at the end of the 1920s. This machine gun was supposed to be the main rifle automatic weapons armored cars, tanks, as well as self-propelled artillery installations and would mostly be used to combat ground targets. By the creation of this machine gun had a little known at that time, the Soviet gunsmith designer Georgy Shpagin.

The basis for the creation of a tank machine gun was to take the DP-27 light machine gun, well-established in the infantry units. This fact has significantly reduced the time to create a new machine gun, since the process of its development was based on the modernization and improvement of an existing design. So, in particular, from his infantry counterpart, he received the scheme of work of automation, firing mechanism, barrel locking system and many other important components. In accordance with the assignment given, the tank machine gun of the Degtyarev system possessed ammunition from disc stores of increased capacity and air-cooled barrel. 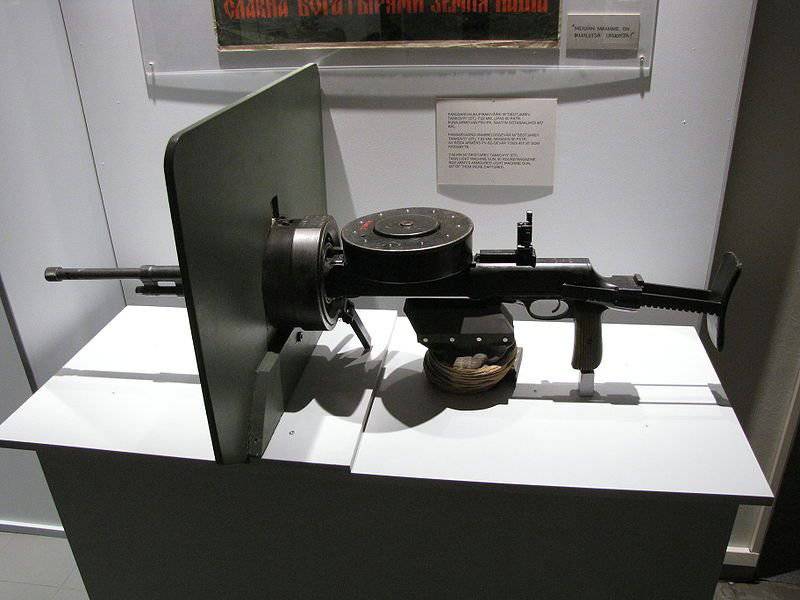 As part of the armored vehicles, a tank machine gun is designed to fire mainly at enemy firing points and infantry, both in shelter and open, punched through with ordinary or armor-piercing bullets. In this case, the intensity of the fire, which is conducted from a DT-29 tank machine gun, is determined directly by the commander of the combat vehicle or the gunner-radio operator, depending on the nature and intensity of the battle, the size and nature of the targets being fired. In most cases, at combat speeds, the firing of armored cars and tanks is conducted in short bursts (usually on 2-7 ammunition) at a distance of up to 600 meters. Much less often when shooting at unarmored and large targets (columns of cars, horse and foot groups), the distance to which was more than 600 meters, the fire was also conducted without stopping the machine in long bursts of 10-15 cartridges. With a favorable battlefield, allowing more effective and accurate fire, shooting is carried out from short stops.

Automation DT-29 was based on a scheme that uses the energy of powder gases, which are discharged from the bore of the machine gun. Locking was carried out by breeding the war larvae in hand. The gas regulator, located in the automation system, gave additional advantages when the machine gun was operating under dusty conditions, pollution and extremely high or vice versa low temperatures. The trigger mechanism mounted on the machine gun allowed only bursts to fire. But even a poorly trained shooter could fire short bursts of 3-5 shots without any problems. The machine gun was fitted with a flag-type fuse blocking the parts of the trigger mechanism in the on state. To reduce the unmasking effect of the flame during firing, a flame arrester having a conical shape was installed on the muzzle of the barrel. 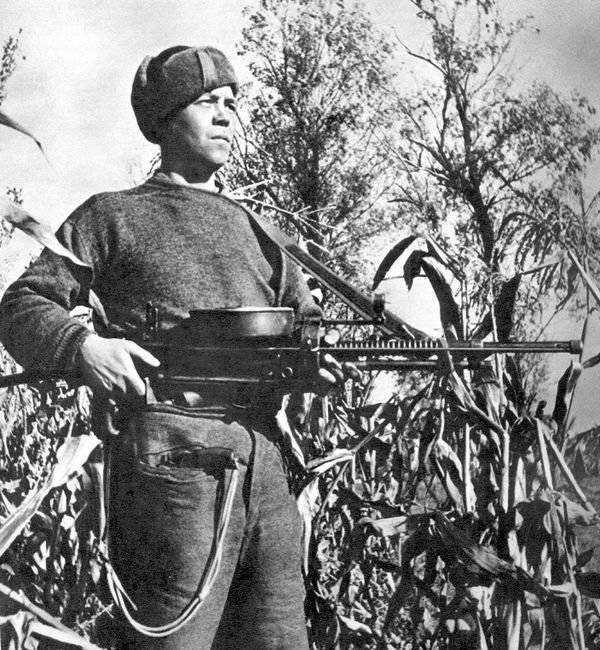 In the tank machine gun, instead of a rather bulky store with single-row placement of cartridges, a new disk magazine was used, in which the cartridges were packed in the 3 series (three-row placement). The capacity of such a disk magazine was 63 cartridge, which was 16 more than in the DT-27 light machine gun, the store also became more compact. The main cartridge used for firing from this machine gun was the rifle cartridge with a light bullet of the 1908 model of the year - 7,62х54 mm. In this case, based on the nature of the battle, cartridges with special bullets (armor-piercing incendiary, armor-piercing and tracer) could be used.

The DT-29 tank machine gun inside the tank was mounted on a special ball mount created by Swordfish. This installation provided fast and free guidance of the machine gun on the target in the vertical and horizontal planes, as well as reliable fixation of the machine gun in any position. At the same time, the massive parts of the ball unit during the battle reliably defended the shooter from the fragments of shells and small arms bullets.

The machine gun was aimed at the target with the help of a diopter sight, which could be adjusted in the vertical and horizontal planes, as well as with a front sight, which was mounted in the ball window. Depending on the removal of the target, the sight could be set at 400, 600, 800 and 1000 meters. In order to prevent the spent cartridges from cluttering up the combat vehicle compartment, the tank machine gun was equipped with a special canvas case. 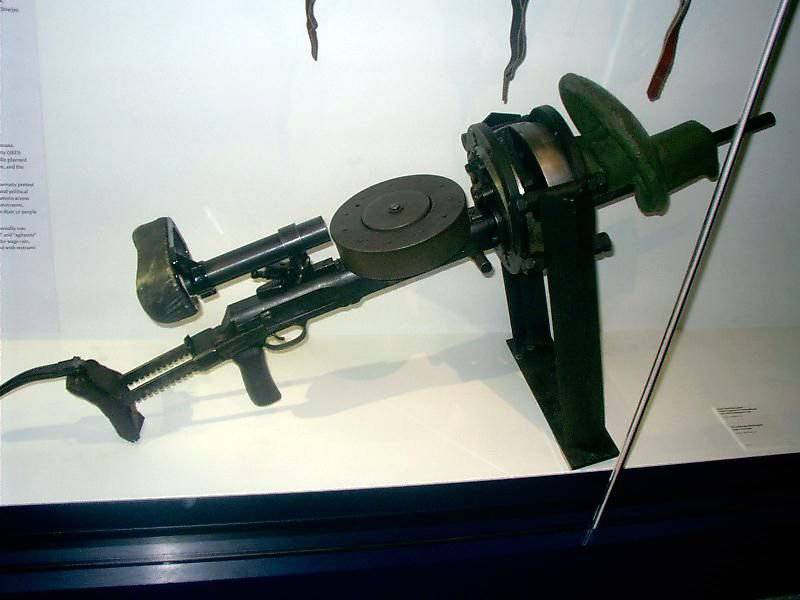 Taking into account the features of mounting the machine gun in a fairly close combat compartment of an armored car or tank, the model’s compactness was achieved by replacing the permanent wooden butt, as on the DP-27, with a metal retractable one. Depending on the need, the machine gunner could push the butt (the fighting position) or move it all the way forward (the traveling position). In the tank, the machine gun was attached to a special ball mount, but Shpagin also provided for the removal of the machine gun from the combat vehicle; special detachable bipods were intended for use as an infantry machine gun.

In the event that the combat vehicle was hit or broken, the crew could use the DT-29 machine gun as a light machine gun and an effective means of self-defense. From the memoirs of Colonel P. N. Tishchenko, who was the Chief of Staff of the 29 Infantry Corps: “In June, 1941, on the southern outskirts of Vilnius, I attached to our headquarters a tanker — a tower shooter from the 5 Tank Division, who could hardly drag but continued to go, carrying a tank machine gun on his shoulder. He said that the 5 tank division had stubborn resistance to the enemy while they had ammunition and fuel. However, then his crew was forced to blow up the tank, having previously removed a machine gun from it. ”

Already during the war, in 1942, the Degtyarev design bureau provided for testing a quad squall fire, which included the DT-4 machine gun 29. This installation was intended to provide dense flat fire on the front of rifle units and could be installed both on the universal wheel-tripod machine of the Kolesnikov's design (from the DShK machine gun of the 1938 model of the year) and on the cavalry cart. During the tests, it was found that the machine is not suitable for quad installation due to the breakage of the tip and the low accuracy of the battle. The variant with the installation of machine guns on the cart was also rejected due to the inconvenience of firing on the move, as well as for air targets. 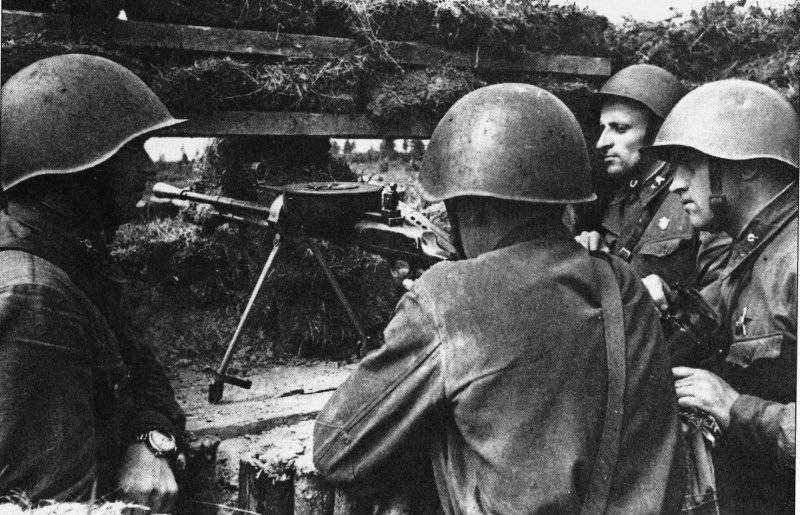 In the 1944 year, as well as the DP-27 light machine gun, the tank machine gun was modernized: the design of a number of parts was changed, which allowed them to be produced by stamping, the return spring was transferred to the trigger frame. The upgraded machine gun received a new designation DTM. Its mass production began in the 1945 year and continued thereafter. DTM machine gun became the main small arms of post-war Soviet armored vehicles and tanks. Experts noted that the tank machine gun of the Degtyarev system was easy to use and device, and with skillful preparation for firing and attentive care was a very reliable automatic weapon. The power of his fire and the accuracy of the battle were quite high.