November 22 2013
5
The tests of the first German planning bombs made it possible to determine the further development of this weapons. The designers were required to increase the range of the planned flight of bombs and the accuracy of hits. The second requirement was connected with the peculiarities of the use of such weapons (the planning bombs were considered primarily as an anti-ship weapon), and the first - with the developed air defense systems. Both problems were supposed to be solved during the BV-226 project. 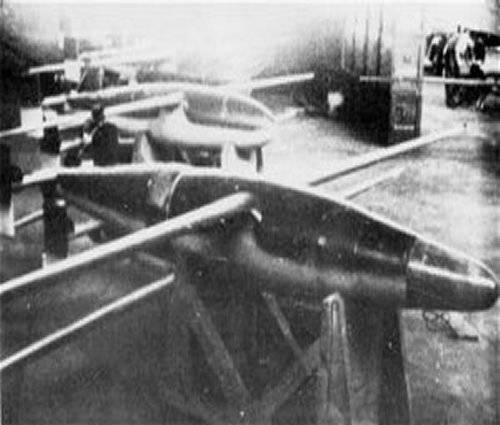 The BV-226 controlled bomb was created by Blohm und Voss employees under the direction of Dr. Richard Vogt. The development of the project started at the beginning of 1943. The main idea of ​​the project was the use of a new aerodynamic appearance of a bomb. In this way, it was intended to maximize the range of the flight planner and thereby bring the carrier aircraft out from under the fire of anti-aircraft artillery. With regard to the improvement of control systems, the existing and developed radio-electronic complexes were considered suitable for use in the new ammunition. Their capabilities allowed without special modifications to increase the maximum range at which the operator could control the bomb.

The requirements for increasing the range had a great influence on the aerodynamic appearance of the promising bomb. On the body of a streamlined cigar-shaped form 3,5 meters long, a “glider” wing of large elongation was installed, as well as a stabilizer with two spaced keel washers. Bomb BV-226 had a high wing with a span of about 6,4 meters. The wing was made relatively flexible and resilient, and in later versions of the project, uncharacteristic aviation materials. At a certain stage in the development of the project, it was suggested that the wing spar be made of metal, placed in a special form and poured with concrete. Despite the seeming strangeness, such a technical solution could provide ease of manufacture and sufficiently high flight qualities.

It was assumed that when dumping the wing of the original design will drop the bomb from the aircraft. Thus, during the suspension, under the fuselage of the He-111 aircraft, the wings of the wing with its upper part had to rest against the engine nacelles and sag down. After uncoupling, the folded wing was supposed to straighten and give the bomb an extra push down, taking it away from the plane.

The BV-226 bomb was heavy enough - its starting weight was 730 kilograms. The nose of the case was taken under the fuse and the warhead weighing 435 kg. The warhead was supposed to be equipped with a contact fuse. Behind the warhead, in the middle part of the body, a part of the control equipment was placed. The radio and command distribution system converted the radio signal into commands of the steering cars. For control, the elevators located on the stabilizer were used. According to some data, the elevators could perform the functions of the ailerons, deviating in the opposite direction, which allowed to significantly simplify the design of the wing.

On the BV-226 bomb it was planned to use a three-point guided radio control system. Thus, the operator, who was on the plane, had to withstand the planning bomb on the right course. The BV-226 project implied the installation of a special sight and a remote control with a radio transmitter on the aircraft. In addition, the aircraft carrier required to install a suspension system of bombs. For example, the He-111 bomber could carry up to three bombs of the new model. In addition, aircraft Ju-88 and FW-190 were considered as carriers of the bomb. 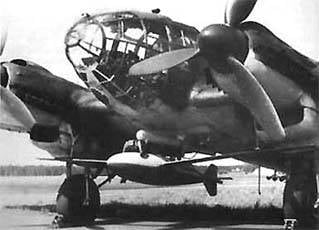 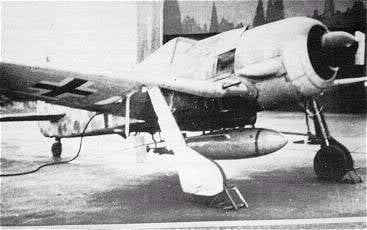 12 December 1943 of the year began the assembly of the first batch of bombs intended for testing. At the same time, the project received a new designation and name - BV-246 Hagelkorn (“Gradina”). Despite the use of concrete in the design, the bomb had a fairly high performance. The calculated aerodynamic quality reached 25 units, but in practice this parameter was slightly less. However, when dropped from 7000 meters, the BV-246 bomb could fly up to 170-175 kilometers. On the final leg of the flight, the ammunition picked up speed to 450 km / h. It is worth noting that the flight data of the new planning bomb significantly exceeded the capabilities of the transmitters. Therefore, the real reset distance was much less than the maximum capacity.

In the BV-246 Hagelkorn project, a radio control system was used. At the beginning of 1944, the Germans learned that the British and Americans have jamming systems capable of disrupting the work of a new bomb. In this regard, the activity of work on the project “Gradina” has plummeted, and at the end of February the project froze.

The project was actually closed only at the beginning of the next year. In January, 1945, the imperial aviation ministry, ordered the development of a Radieschen (Radish), a guided bomb with a passive homing head. This system would reliably hit enemy ships using jamming systems. Moreover, the updated bomb could have been guided by a source of interference, which should have a corresponding effect on its effectiveness.

The BV-246 Radieschen modification differed from the base bomb by the new layout of the forward part of the hull. In an elongated nose fairing placed receivers homing head. The rest of the equipment was placed in the middle of the case, where the receiver of the radio command control system was previously located. Apart from the new nose cone, the design of the bomb has not changed. Weight and flight data remained at the same level.

It should be noted that the installation of a passive radar homing head was considered a means of dramatically improving the combat qualities of the bomb. In theory, the flight data of a BV-246 bomb allowed it to be dropped several dozen kilometers from the intended location of the target. Since the attacked ship, as expected, constantly used various radio-electronic systems, its destruction was considered, as they say, a matter of technology.

However, by the time the new bomb began to develop, the Radieschen homing head was still not ready. Because of this, the finishing of the “Radish” system was carried out simultaneously with the testing of a modernized guided munition. Ten BV-246 test drops with the Radieschen system are known. Eight of them ended in failure: due to failures of an unprepared homing head, bombs fell at an unacceptably large distance from the conventional target. Only two test bombings yielded results. In the best of them, an experienced bomb lay just two meters away from the radio antenna imitating the ship.

Approximately in the early spring of 1945, the company Blohm und Voss received a contract for the manufacture of a large batch of BV-246 Radieschen bombs. The imperial aviation ministry wanted over a thousand new munitions to be used against the anti-Hitler coalition ships. The war came to an end and the German industry did not have time to fully fulfill the order of the military. According to various sources, no more than a few dozen new planning bombs were manufactured. None of them got into the parts of the Luftwaffe and was not used in a real battle.

The BV-226 / 246 Hagelkorn project has not yielded any results related to the increased combat potential of the German armed forces. However, the development of a new planning bomb led to the emergence of several interesting technical solutions, as well as the Radieschen guidance system, which was almost brought to mind. A notable feature of the Hagelkorn project was the fact that, in its basic version, the BV-226 bomb was a conventional guided munition of the time and did not differ from other German developments by any design or equipment features. At the same time, the upgraded version of the BV-246 Radieschen was the first anti-radar bomb in the world to be tested and put into series. However, the course of the Second World War did not allow the German army to try out new weapons in practice.

Ctrl Enter
Noticed oshЫbku Highlight text and press. Ctrl + Enter
We are
Foreign tank guided munitionsGuided bombs for the Luftwaffe
5 comments
Information
Dear reader, to leave comments on the publication, you must to register.