International recognition of the Sea of ​​Okhotsk Russia: rejoice or look for "pitfalls"?

November 20 2013
116
Just the other day, an event that could well be called historical. A kind of enclave with an area of ​​more than 50 thousand square meters. km in the Sea of ​​Okhotsk recognized as part of the Russian continental shelf. Moreover, it was recognized as a special subcommittee of the United Nations, which (the subcommission) worked on this issue for several months after the submission of relevant documents by Russia. These documents, in turn, appeared after large-scale research in the Okhotsk region. It is noteworthy that members of the UN sub-commission decided on the right of the Russian Federation to the aforementioned thousands of kilometers of the shelf unanimously. The last point in this kind of work should be put after the meeting of the UN Commission in February next year (33rd session). The fact that the Russian shelf will grow by the Okhotsk part both de jure and de facto is no longer in doubt, since the opinion of the UN special sub-commission based on the work of international experts is more than authoritative at the international level. 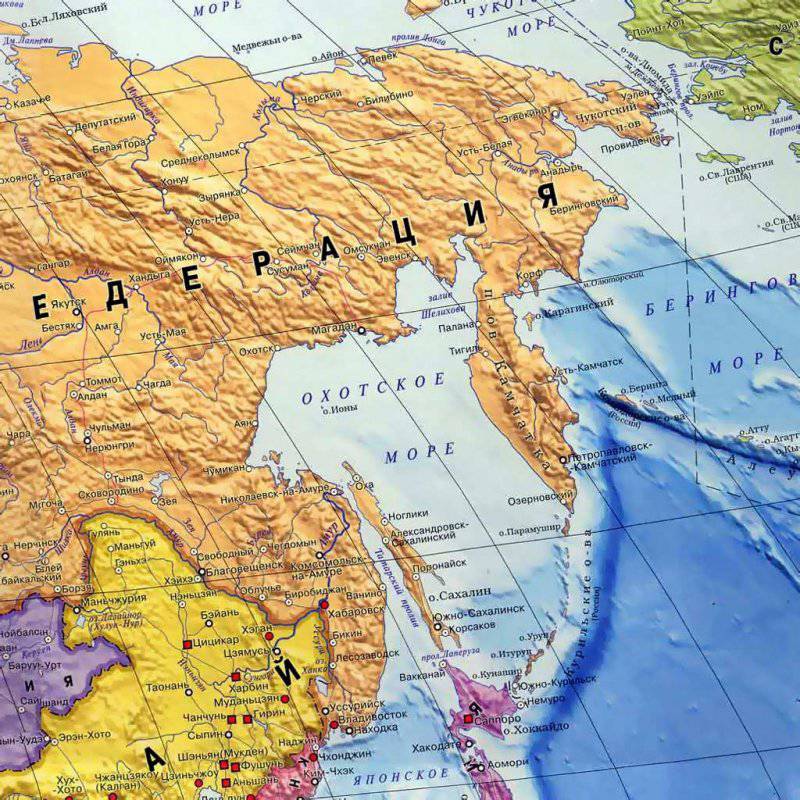 About the new, let's say, acquisitions of Russia, the Minister of Natural Resources and Ecology of Russia Sergey Donskoy spoke out:

This is a success to which Russia has been going for many years. Thanks to the recognition of the enclave as part of the Russian continental shelf, our country receives additional reserves of valuable minerals and other natural resources. In terms of reserves, these territories in 52 thousand square meters. km - the real cave of Ali Baba, access to which opens up tremendous opportunities and prospects for the Russian economy. Let me remind you that the inclusion of an enclave in the Russian shelf establishes Russia's exclusive rights to the resources of the subsoil and the sea floor of the enclave, including fishing for sedentary species, that is, crab, shellfish, etc., and also extends Russian jurisdiction to the territory of the enclave in terms of the requirements for fishing, safety, environmental protection, etc. - that is, the Russian legislation on the continental shelf will extend to the territory of the enclave, which is now legally considered to be part of the oceans. Thus, the Sea of ​​Okhotsk will be fully recognized by the international community as the inland sea of ​​Russia.

That is, together with obtaining economic rights to new areas of the shelf, Russia actually receives for internal use the whole sea - the Sea of ​​Okhotsk, which will soon become the internal seas of the Russian Federation. This means that Russia gets all the rights to the resources of the Sea of ​​Okhotsk, and our country will be able to actively resist the attacks of foreign poaching schooners, which are now not uncommon in these waters.

Here is a recent example of foreign poachers' interest in the “living creatures” of the Sea of ​​Okhotsk: Russian border guards in the Sea of ​​Okhotsk detained the Asari transport refrigerator, whose crew is suspected of poaching. The crew, by the way, is international. According to some reports, the shipowner is a South Korean company. The ship went under the Panamanian flag in the Northern Kuriles. The captain of the Korean (Panamanian?) Refrigerator did not react to the demands of the border patrol ship trying to divert Asari from an organized chase into neutral waters. After the Russian border guards "Asari" caught up, the on-board documentation was withdrawn, and proceedings against the crew began.

If the Sea of ​​Okhotsk is recognized as the inland sea of ​​Russia, the powers of the Russian border guards in relation to foreign ships sailing in sea waters without coordination with the Russian side will definitely be added.
As it was already said by the head of the Ministry of Natural Resources, economic benefits will also increase. According to Rosneft, a total of 2 trillion is on the shelf. cubic meters of gas and 1,1 billion tons of oil.

I would like to believe that the new, if I may say so, “conquests” of Russia will benefit the people of Russia (the state treasury), and not just a select handful of people preparing to receive part of the huge Okhotsk pie. If in the future the second option works, then the positive information will receive a very gray coloration, and will reduce all research by scientists to the fact of unintentionally serving the interests of the oligarchy ...

So, Russia, after the work of the UN Subcommittee on the Limits of the Continental Shelf, is one step away from a big victory. Obtaining the right to the Sea of ​​Okhotsk and to a substantial area of ​​the continental shelf is an achievement that is indisputably outstanding. However, it is worth thinking about the possible presence of “pitfalls” in such a decision of the UN subcommittee. Perhaps there are no “reefs” here, and it is possible that there is absolutely no need to look for some conspiracy. However, if you look at the situation more closely, you can see interesting things. One of these things is the potential status of the Sea of ​​Okhotsk, voiced by the Minister of Natural Resources and Ecology Sergey Donskoy, namely the status of the internal sea of ​​Russia.

The Sea of ​​Okhotsk is really surrounded by the territories of Russia, but on the southern outskirts it washes the shores of the Japanese island of Hokkaido. The presence of one of the seashores of the territory of a contiguous state did not give a legal opportunity to turn the Sea of ​​Okhotsk into the inland sea of ​​Russia. The fact that the sea has become an exclusive zone of the interests of the Russian Federation has recently been out of the question, since Japan was categorically opposed to the designated Russian initiatives. And now the Ministry of Natural Resources is talking about the readiness of the full recognition of the Sea of ​​Okhotsk as the internal sea of ​​Russia by the world community.

In 2001, the Russian Federation has already filed an application for a significant expansion of its economic zone in the Sea of ​​Okhotsk, and then it was the Japanese who obstructed this application. Now, it turns out, there were no problems with the Japanese ... Why would it?

It is interesting that in the summer of this year, Russian officials have already expressed themselves on this issue. One of them was the Deputy Minister of Natural Resources and Environment of the Russian Federation Denis Khramov:

We do not consider the application difficult and do not expect very long consideration. We were given recommendations, we finalized everything, agreed the application with Japan.

Especially interesting is the remark on the approval of the “summer” application with Japan, because at the end of April 2013, our country was visited by the head of the Cabinet of Ministers of the Country of the Rising Sun, Shinzo Abe. Then Mr. Abe didn’t intend to conceal that the main purpose of his visit was “breakthrough agreements” on the islands of the Kuril archipelago. Abe left Moscow, and there seemed to be no “breakthroughs” on the islands, thank God, they did not manifest themselves. But ... Then our application for the Okhotsk site appears. And the most interesting thing: Japan immediately expresses its approval to the Russian application - once, the UN functionaries vote for the Russian application unanimously - two ... I wonder how this Japanese "partners" suddenly turned out to be so friendly and compliant with respect to Russia. At one time, I had to deal with Japanese subjects and I dare to say that no self-respecting Japanese will ever make any gifts without confidence in his own benefit. Such a people with their own special, clearly different from ours, mentality. But if one assumes that Japan has been promised benefits from its support, it is even somehow scary to suggest what such a benefit is ... Has it ever occurred to someone “above” to change the status of the Okhotsk shelf to the wide Japanese “access” to the Kuril Islands - on a certain “barter” exchange between territories and waters, between statuses and other components in bilateral relations ...

After all, one of the prominent hyperliberal economists close to the power circles could even have a little thought that trillions of gas cubes and innumerable oil barrels (as a result of the shelf development) could be more profitable than the arrangement of the Kuril territories. And if such a “little thought” is also actively brought to decision-makers, then you need to be especially careful - continue to monitor the situation so that one “fine” day we will not wake up in a country with different outlines on the map

Ctrl Enter
Noticed oshЫbku Highlight text and press. Ctrl + Enter
We are
Our shelfResults of the week. "It is not that fever, that is the center of gravity"
116 comments
Information
Dear reader, to leave comments on the publication, you must to register.