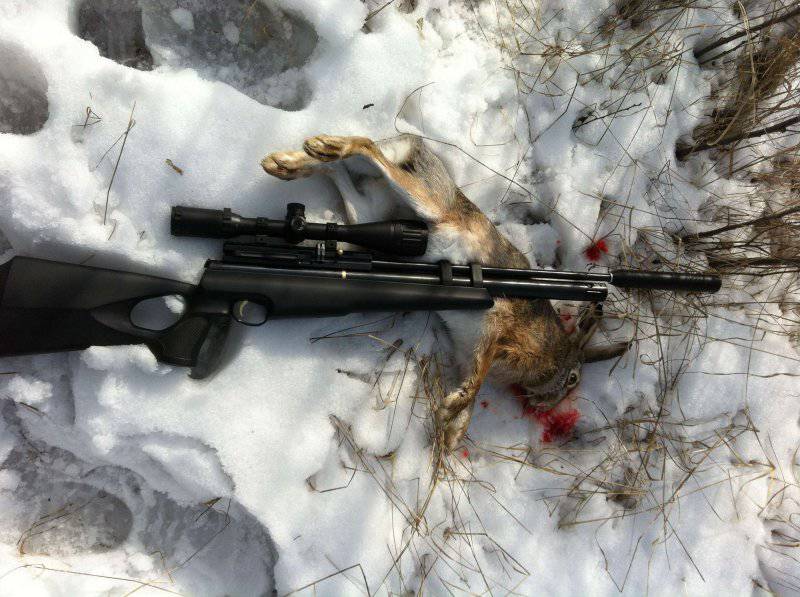 Pneumatic weapon It was originally created as an alternative to gunshot hunting rifles. Gradually, it became interested in the military and at a certain period was even actively used by some armies. However, the development of firearms eventually led to the fact that pneumatic weapons are now mainly used for training and for the so-called. entertaining shooting. It is worth noting that in our country, pneumatic weapons of such purpose are widely spread, because of which other classes of "pneumatics" may be unknown to the general public.

Only relatively recently, just a couple of decades ago, domestic weapons lovers learned that air rifles can be used not only for target shooting, but also for hunting. The capabilities of the weapon, in which several special technical solutions are applied, make it possible to hunt various small game without resorting to powerful firearms. At the same time in our country there are restrictions on the power of the hunting airguns and on the scope of its application.

According to Russian law, pneumatic weapons are divided into several classes. So, samples of sports, educational or entertainment purposes must have a muzzle energy of no more than 7,5 J. Hunting air guns, in turn, can shoot a bullet with energy up to 25 J. Pneumatics with high energies is not provided by law, which imposes appropriate restrictions on its acquisition and use. Airguns with muzzle energy up to 25 J, as well as firearms, require an appropriate permit and are registered with the Ministry of Internal Affairs.

Hunting air guns can actually be of any design, but at the present time rifles with a spring-piston mechanism and with pre-pumping (PCP or Pre-Charge Pneumatics) are most common. Only these systems provide the necessary power and reliability of fire. It is worth noting that the "top" rifles of the hunting class have a system with a built-in compressed gas cylinder that provides a shot. The PCP system has several advantages over others and is therefore more convenient for hunting weapons. 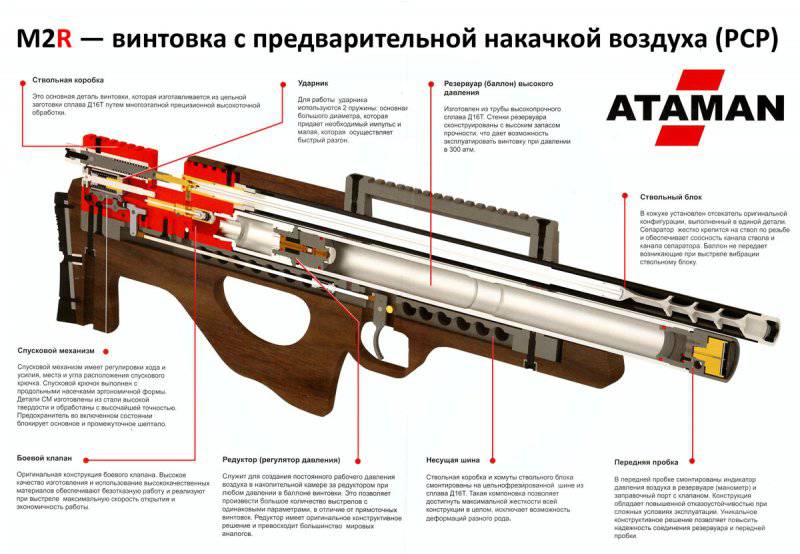 The most interesting feature of PCP rifles, attracting the attention of hunters, is the almost complete lack of recoil. In the design of such a weapon, there are no large moving elements, and the momentum obtained from the movement of a bullet is extremely small and almost not felt. In this regard, in particular, it becomes possible to use any suitable sights, mounts, etc. However, the arrows often approach the choice of sights and another “body kit” with great responsibility.

Hunting air rifles most often have a caliber 5,5 or 6,35 mm. This caliber allows the weapon to achieve the required energy performance. In the case of 4,5 caliber bullets, the mass of which does not exceed 0,5-1 g, overcoming the conditional barrier in JNUMX-10 J becomes a complex design task associated with an increase in the initial velocity of the bullet. For this reason, larger-caliber ammunition is most often used in hunting weapons with energy up to 12 J. It is worth noting that there are air guns of calibers .25 (45 mm) or .11,45 (50 mm) abroad, but almost always these weapons are made to order and in accordance with the requirements of a particular shooter. At the same time, most hunters use weapons of medium calibers - no more than 12,7 mm.

All modern hunting PCP rifles have a similar appearance. Manufacturers use a common architecture, changing some of the elements or using their groundwork for materials. All rifle units are mounted on a wooden or plastic box. The shape and material of this part is chosen by the designers and affect mainly the usability of the weapon, but not its characteristics. A barrel, a firing mechanism with a bullet delivery system, as well as a gas system, which ensures the operability of the rifle, are mounted on the bed. The basis of the gas system is a cylinder containing a gas under pressure. Through the reducer gas from the cylinder is fed into the accumulating chamber connected to the trigger mechanism. Depending on the design of the rifle, after pressing the trigger, gas from the accumulation chamber can flow directly into the barrel, behind the bullet, or push a separate drummer.

Since the gas system is the basis of a pre-pumped rifle, modern weapons of this class use several original ideas designed to improve shooting accuracy. For this purpose, gas reducers capable of controlling the pressure in the accumulation chamber with high accuracy, durable cylinders for compressed gas, etc. are used. The pressure in a gas cylinder can reach tens or hundreds of atmospheres, which places high demands on its strength characteristics. High pressure allows to ensure long-term use of gas: modern medium-caliber PCP rifles at one gas station, depending on the set pressure in the accumulation chamber, can make shots from 20-30 to 150-200 without noticeable changes in characteristics. For large-caliber weapons, this parameter does not exceed several shots.

The stated accuracy of shooting rifles from world-class manufacturers does not exceed one angular minute. However, such shooting accuracy has to be paid for with some features of shooting and maintenance. Thus, the effective range of medium-caliber air rifles does not exceed 80-100 meters. Because of the relatively low muzzle energy, the bullet of such a weapon flies along a steep trajectory, and this makes it difficult to fire long distances. In addition, PCP rifles are very demanding on the quality of the gas used. For this reason, in particular, many hunters never pump atmospheric air into the balloon, the humidity of which can seriously affect shooting. For filling the cylinder used prepared air stored in a separate container. 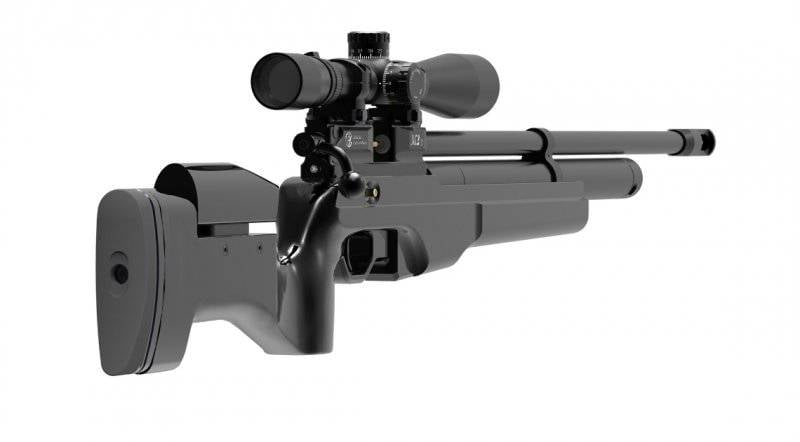 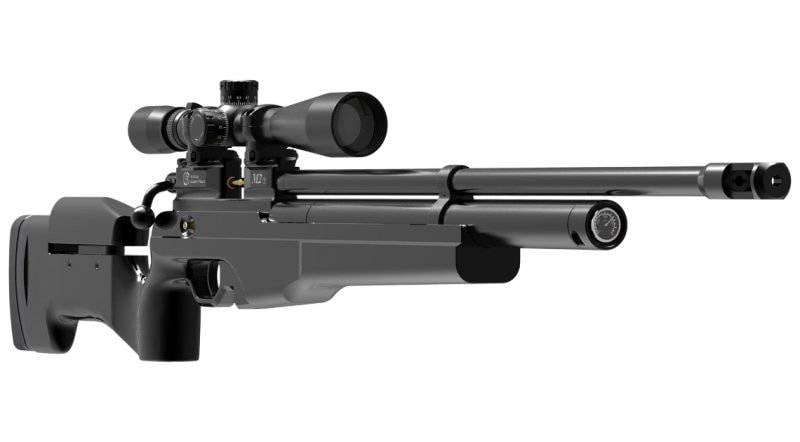 Changes in legislation that have emerged in recent years have led to increased interest in the hunt with airguns. Products of well-known foreign manufacturers of airguns, such as Crosman, Hatsan and others, appeared on the Russian market. Seeing the interest of the domestic buyer, the Russian company ATAMAN launched its line of PCP rifles. The current state of the market suggests that Russian hunters are interested in pneumatic weapons and mastered it. Of course, while the hunting "pneumatics" can not compete with other classes of pneumatic or firearms, because it has a specific niche of use. Nevertheless, practice has shown that such a weapon is interesting to the shooters. Perhaps, in the future, interest in hunting with airguns will increase, with the result that rifles of this class will become the same habitual element of the hunter’s appearance as the legendary double-barrels or modern Saiga carbines.

Ctrl Enter
Noticed oshЫbku Highlight text and press. Ctrl + Enter
We are
Berthier rifle - a rifle for the Zouav and all the restSVT. Career rifle
33 comments
Information
Dear reader, to leave comments on the publication, you must to register.