How does Moldova call for solving the “Transnistrian issue”?

November 20 2013
46
The few remaining days before the start of Moldova’s planned participation in the Vilnius EU Eastern Partnership Summit, the official Chisinau decided to take the initiative to “resolve” the situation with the Pridnestrovian Moldavian Republic. The essence of the proposal is to introduce an international peacekeeping contingent in those border areas that today are controlled by the peacekeepers of the Russian Federation. 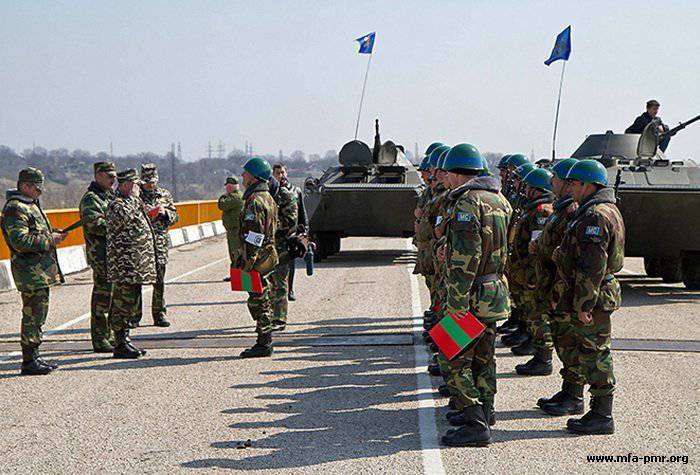 Initially, such an initiative was expressed by representatives of the Moldovan delegation of the so-called Joint Control Commission (JCC). Then similar statements were heard from the Moldovan Ministry of Defense. A notice appeared on the website of the Defense Ministry of the Republic of Moldova that unilateral actions of Tiraspol in the so-called security zone worsen the situation with this very security in the region.

What kind of “one-sided” actions of Tiraspol in this case are we talking about? And we are talking about the construction of the power supply system, which (construction), according to the Moldovan delegation of the JCC, was made with territorial violations and without the consent of Chisinau. How repair and installation of supports for power lines affected Moldovan security - Moldovan officials did not specify. But on the same Internet resource (the website of the Moldavian Ministry of Defense), the end of a note about the “deteriorating security situation” includes the following words:

The Moldovan delegation states that it is necessary to enter an international peacekeeping mission and conduct security zone inspections.

In other words, Chisinau states that, supposedly, Transdniestrians “are active” in the security zone with the “connivance” of the Russian peacekeeping contingent, and this allegedly endangers the security of the whole of Moldova. It is noteworthy that all these “concerns” of the Moldovan authorities arose just before the start of the Vilnius EU summit, at which the initialing (preliminary signing) of the agreement on Moldova and the creation of a common free trade area should take place. That is, Moldovan government officials seem to demonstrate with their idea of ​​replacing Russian peacekeepers with a certain international peacekeeping contingent of adherence to the ideals of the West: they say we show Brussels that we are firmly determined to give up everything Russian, and in return we hope to get a warm EU-wing, under which we will hide from all problems.
The European Union has already promised a “warm wing”. While we are talking about the preparation of a document on the abolition of visas between Moldova and the EU after the signing of the association agreement. After that, tens, and even hundreds of thousands of Moldovan workers, as the official Chisinau expects, will be able to “engage with hated Russia and go to heaven or manna somewhere in Paris or Madrid. And in Paris and Madrid, perhaps there are not enough Moldovan migrant workers ...

In order to increase the effect, the Moldovan police decided to work with greater predilection for Russian citizens traveling along the Chisinau-Tiraspol route. In particular, at the police station “Gyrbovets”, Moldovan law enforcement officers of 18 November detained a delegation of the Russian Institute for Strategic Studies, headed by historian Leonid Reshetnikov. At the same time, as the detainees themselves note, the impression was that the Moldovan police, having carried out the detention, did not really understand what grounds for the detention to present to the Russians, which proved the existence of the FAS command from above. At first, everyone was asked to undergo some additional registration (regular registration already took place at Chisinau airport), then, obviously realizing that they did not state that no Moldovan law stipulated, they decided to switch to protracted games with verification of identity documents of Russians. After lengthy “procedures,” RISI representatives were released.

On this fact immediately expressed in the PMR. The Ministry of Foreign Affairs of the Republic said that the actions of the Moldovan police are regarded as an act of demonstrative provocation and unfriendly actions. In addition, the Ministry of Foreign Affairs of the Pridnestrovskaia Moldavskaia Respublika drew attention to the confirmation of the previously voiced idea that the so-called migration control points that appeared on the border strip could be used by the Moldovan side with damage to the displacement of the population.

By the way, the Transnistrian side decided to give the aspiring European integration to the Moldovan side, as it is now fashionable to express, an asymmetrical response in the international arena. A PMR delegation led by President Yevgeny Shevchuk took part in the conference on the issues of resolving the Moldovan-Transdniestrian conflict, which was held in Germany. During the conference, Yevgeny Shevchuk stressed that the overwhelming majority of the inhabitants of Transnistria are categorically opposed to the process of active involvement of the republic in European economic institutions. The PMR President noted that if Moldova strives to be associated with the European Union, then Transnistria will not; if Moldova is going to become part of the European Union in the future, then Transnistria is not going to. And this problem is easy to solve, for which the republics should agree on, quote: “peaceful divorce”:

There is no need to be afraid of international recognition of a de facto state if it brings stability and answers the question of how to resolve the conflict. And international recognition of Pridnestrovie, in our opinion, leads to stability and the most just settlement. The highest value is a person who lives here and now, with his problems and rights, and no one has the right to take away from a person the right to choose, the right to freedom! Dear ladies and gentlemen, a lot of what has been said, perhaps, does not appeal to everyone, much is not disclosed, but is set out in the theses, taking into account the time regulations, but what has been said is based on the will of half a million citizens, and if we realize this together, then I am sure we will find the key to solve the problem. And he, in my opinion, - in a civilized, formalized "divorce", following the example of the Czech Republic and Slovakia, Serbia and Montenegro, and from the fact that in the world the de facto Transnistrian state will gain international recognition, there will be only pluses: in stabilizing the situation in the region, peaceful cooperation between neighbors and solving the problem through the prism of the will and opinions of people, by virtue of historical circumstances for more than 23 years defending their right to choose and live!

Shevchuk also spoke on the peacekeeping mission in the region:

I cannot thank here and mention the invaluable efforts of the guarantor country of Russia, which puts not the political goals of imaginary victories but the goal of protecting life at the forefront. And today, almost every year, largely due to the peacekeeping efforts of the Russian Federation, it is possible to localize in the Zones of Security before the 60 incidents of varying degrees of confrontation. Thanks largely to the humanitarian assistance of the Russian Federation in the Transdniestrian Moldavian Republic, a humanitarian catastrophe did not occur due to the applied economic restrictions and overt sanctions against foreign economic activity and the transport infrastructure.

If we compare the words of Yevgeny Shevchuk, expressed by him in Germany, and the ideas of Moldovan political functionaries regarding the replacement of Russian peacekeepers by an international contingent, it becomes obvious that the Moldovan leadership will try to do everything to solve the “Transnistrian problem” by its own methods, but by proxy. Obviously, the goal is the same: to put a military contingent from Europe (NATO countries) on the Dniester, who himself is not averse to participating in military provocations (Kosovo as an example), and his ardent supporters from Chisinau mesh I am not inclined to carry out these provocations either.

Today, the Russian peacekeepers clearly prevent Chisinau from “establishing its own order” in the Transdniestrian Moldavian Republic ... I remember that one politician (only from the Caucasus), the Russian peacekeepers, also interfered with “establishing their own order”, but only he decided to get rid of the peacemakers quite differently ... a'lya Saakashvili), of course, will not go, but to summon the “world progressive public” with the aim of influencing Russia can even be - which he does.
Naturally, in such conditions Russia cannot in any way succumb to provocations and withdraw peacekeepers from the banks of the Dniester, for if, God forbid, it happens, then the Transnistrian Moldovan Republic, with the active support of EU and NATO functionaries, simply ceases to exist.

PS According to a recent sociological survey conducted in the Transdniestrian Moldavian Republic, 82,6% of respondents said they want a connection between Transnistria and Russia.
According to the opinion poll in Moldova, 42% of respondents are in favor of association with the EU, 38% are against such an association, 20% are undecided with the answer.

Ctrl Enter
Noticed oshЫbku Highlight text and press. Ctrl + Enter
We are
Moldovan independence: 24 of political uncertaintyNew US Democratic Approach in Moldova: Unite and Conquer
46 comments
Information
Dear reader, to leave comments on the publication, you must to register.