November 23 2013
32
Kim Sengupta, a correspondent for The Independent on defense issues, recently published a special report under the catchy headline “New Army Models: Why Does the West Deploy Force in Africa?” The article talks about a new strategy of “muscular soft power”, plans for countries to prepare West in Africa local self-defense forces, building infrastructure and civil society institutions. The author, however, concludes that in reality Western states are fighting for the redistribution of spheres of influence: after all, in recent years, China has strengthened significantly on the black continent. 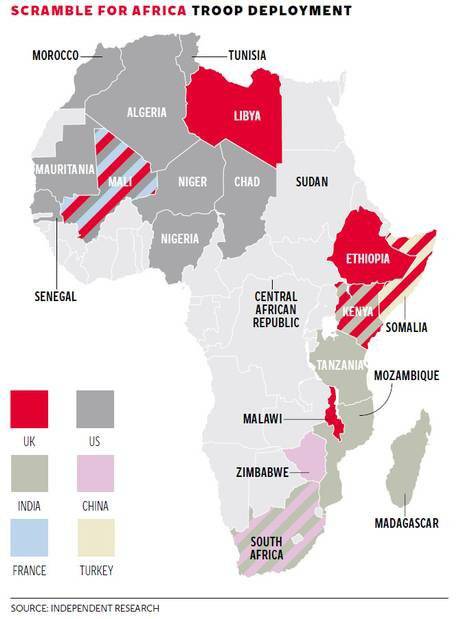 Sengupta notesthat if the French mission in Mali was successful, this does not mean that Paris has prepared a kind of “template” for the actions of the Western forces in Africa. Now we are talking about the so-called "muscular soft power", which includes the preparation of local states for self-defense with the parallel creation of infrastructure and civil society institutions in African countries. It is hoped that such steps will leave large expeditionary operations in the past.

The journalist claims that the wars in Iraq and Afghanistan have weary the public. "Foreign Adventures" no longer needed. Even such a “relatively risk-free” venture, like the NATO bombing of Libya in the 2011 year, looks unattractive today. The “Arab Spring” has passed into the “winter”, and about who is fighting against whom, the world community is in uncertainty. "Good guys" are no longer an unambiguous definition.

As for the notorious Afghanistan, the mistakes on this front were formulated during a recent visit to London by James F. Dobbins, the US special representative in Afghanistan and Pakistan. He believes that the war dragged on, America suffered unnecessary losses, and the project of reconstruction and development failed.

The author ironically calls the West’s intentions in Africa “not entirely altruistic.” Here are the components of Western interest in the black continent: the struggle for influence, natural wealth, commercial potential.

China, which "desperately needs" resources and the implementation of its many construction projects, is now demonstrating military might in Africa. Recently, Chinese troops began patrolling in Mutare (Zimbabwe). Recently, South Africa welcomed the proposal to strengthen military ties with Beijing. Major General Ntakaleni Sigudu of the South African Ministry of Defense reminded his compatriots that Chinese education of local army personnel hastened the end of apartheid. In addition, Sengupta writes, Beijing offered counter-terrorism assistance to Nigeria and sent its defense attaches to a number of African states.

The international community agrees that the inability of states to resist terrorism should not turn these weak countries into a haven for the next wave of terrorists who will certainly try to attack the West later.

The last British campaign in Africa was conducted 13 years ago - in Sierra Leone, the author recalls. However, the UK is now engaged in the preparation of local armed forces in the three states that hardly anyone would call "calm." General Sir Peter Wall, Head of the General Staff of the Army, they were listed: Somalia, Mali and Libya. In the latter case, we are talking about the training of Libyan militias for further military service. The plan to turn Libyan militants into security forces is David Cameron's idea. Training will begin at Bassingbourn barracks in Cambridgeshire early next year.

As for France, it maintains a military presence in the states from Chad to Djibouti, from Côte d'Ivoire to Gabon.

The largest US military project in Africa is Egypt. The author recalled that his military forces were receiving 1,3 billions of dollars from Washington as annual aid. True, some programs were recently suspended, but congressmen are hoping to use an aid tool to bargain to curb the Egyptian military. The Pentagon also owns the Transsahar Counter-Terrorism Initiative (TSCTI), which serves civilian and military projects in Mali, Chad, Mauritania, Niger, Algeria, Morocco, Senegal, Nigeria and Tunisia.

The “Independent” correspondent also reminds us that the “focus of defense” of the United States under Barack Obama has shifted towards the APR. American initiatives in Africa therefore emphasize the importance of being on a black continent.

Kim Sengupta cites the words of security specialist Robert Emerson, who believes that the use of “soft power” by a superpower can give a corresponding impetus to emerging power - China. As a result, the Celestial Empire can also go along the “soft” path. As a result, this soft muscle game will gain variety. Conflicts in Africa will not disappear in the near future, the expert believes, but they will be seriously adjusted. The black continent will prove to be an “exciting arena of rivalry” for influence.

In addition to the article, of interest are the comments of readers to it.

Did the author want to say with the article that colonization is again in action? In order for the ruling elite to steal all natural resources from the indigenous population, stable puppet governments must be seated in their respective countries. Citizens (working population) should be taxed, the money will be used to finance the infrastructure necessary for the full development of the continent. Order and discipline must be restored.

Naturally, the locals do not take all this to heart. As a result, the United States is launching a military vehicle, the purpose of which is to change hearts and minds. And, of course, another goal is to explain the order of things to the local annoying “terrorists” who harbor the idiotic idea that the land, resources and, consequently, all wealth supposedly belong to the people, and not to just a few representatives of the foreign capitalist elite of venture capital ...

But where does this sudden rush come from? Well, in the US, 100.000 or so, military men, hardened in wars, are now either languishing in anticipation of orders, or are ready to attack Syria or Iran (for the sake of Israel). So why do good people stand idle? In addition, the longer the US pulls, the more likely the Chinese strike becomes.

Take Sudan and South Sudan: The United States there prepared the ground for splitting the former Sudan into two parts, one of which is rich in oil and has full US military support. The United States does not help another country. This is another operation to seize territory, another means for those in power, always ready to get hold of other people's resources in their dirty hands.

We, the West, have destroyed Iraq, Libya, Egypt and made them wide open for exploitation by internal and external terrorists. And all just because we did not like their leaders.

None of these wars were meant for freedom. All of them were started for the sake of power and money.

Sudan, like Kosovo in Europe, is a classic example of the application of a method that does not contain humanitarian ideals. Kosovo is now illegally imported weaponthere is sex and drug trafficking ...

Observed and translated by Oleg Chuvakin
- especially for topwar.ru
Ctrl Enter
Noticed a mistake Highlight text and press. Ctrl + Enter
We are
War in Mali. Russians are victims of jihad in West AfricaWar in Mali and AFRICOM Plan: Target - China
32 comments
Information
Dear reader, to leave comments on the publication, you must to register.