November 19 2013
14
The Pentagon decided to refuse to purchase the next batch of Russian-made Mi-17В-5 helicopters (the domestic Russian designation Mi-8МТВ-5), which were acquired as part of the program to re-equip the Afghan army with new military equipment. The lobbies of the US military-industrial complex, combined with the emerging cooling between the two countries, threaten the very cooperation of the two states to resolve the Afghan problem. However, in fairness, it can be noted that the American side calls the possible corruption of earlier deals one of the reasons for the refusal to purchase another batch of Russian helicopters.

The first contract for the supply of Russian Mi-17 helicopters to Afghanistan at the expense of the American budget was concluded in the 2011 year. That contract implied the delivery of a 21 helicopter Mi-17В-5 with a total value of 375,05 million dollars, as well as a possible option for the further purchase of another 12 helicopter, which was later also implemented. 17 June 2013, the Pentagon has signed another agreement to purchase 30 Mi-17В-5, as well as spare parts for these helicopters and their integrated service. The cost of the new contract is already about 572,2 million.

Thus, over several years, Rosoboronexport concluded a number of contracts with the Pentagon to supply 63 Mi-17B-5 helicopters to Afghanistan. The total amount of these transactions is estimated at 1,1 billion. How many Russian helicopters have already been delivered to the Afghan side are not reported. In 2014, the Pentagon planned to add one more 15 helicopter to the already concluded contracts, but opponents of the War Department in the US Congress forced them to retreat. Finally or temporarily, it is not yet clear, but, apparently, it is still final. The cancellation of this transaction was reported by the Associated Press agency, which refers to John Cornyn, the senator from the Republican Party (from the state of Texas). It was Kornin who was one of the main opponents of this deal. 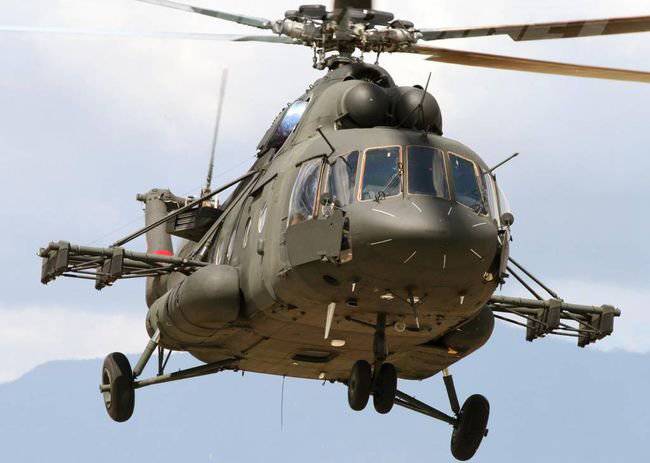 John Cornyn said he welcomed the decision. “I applaud the Pentagon’s decision to finally abandon the purchase of additional helicopters from Rosoboronexport.” Earlier, the US Senate demanded that the Ministry of Defense of the country cease all business relations with Rosoboronexport, because the Russian company also supplies various weapons to the Syrian government. And, as is known, the Syrian regime and the Assad government cause American politicians, especially Republicans, to have obvious pains lower than the back.

The words of John Cornine about the cancellation of the transaction were later confirmed by the Pentagon spokesman Maureen Schumann. According to her, initially the military department requested from Congress money in the 2014 budget for additional staffing of the Afghan security forces, but later the Pentagon revised these requirements, consulting with Congress. There are no plans to acquire additional Mi-17В-5 helicopters from Russia.

Initially, the plans of the US military were to purchase more 15 Mi-17 helicopters from Rosoboronexport, the military asked the Congress 345 million dollars for these purposes. At the same time, according to Maureen Schumann, all the agreements concluded earlier between Rosoboronexport and the Pentagon are being successfully implemented, and there is no talk of a waiver of already concluded contracts. This information is provided, in particular, by the ITAR-TASS agency. According to Schumann, the Pentagon is engaged in the delivery of Kabul of all Mi-17В-5 helicopters, which were acquired earlier, the helicopters are delivered exactly in time, as it was planned earlier. 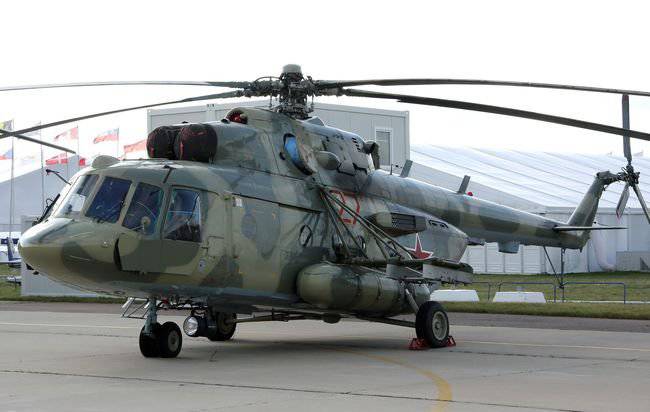 The reasons for which the US military were forced to agree to the purchase of Mi-17, quite prosaic. The Mi-17В-5 is an export version of the Russian helicopter Mi-8МТВ-5, which belongs to the widely known and still successful developing platform Mi-8. This helicopter is well known in Afghanistan, it has been used here since the beginning of the 1970s. Mi-8 USSR helicopters delivered to Afghanistan at a time when the country was led by King Mohammed Zakir-Shah. Later, this particular helicopter became the main vehicle of the armed forces of the country. The use of these helicopters continued after the Soviet troops left the territory of Afghanistan, and after the government of Najibullah finally fell. In fact, it was the Russian Mi-8 that became the helicopter that was already mastered quite well by several generations of Afghan military pilots and technical personnel. It was these circumstances, as well as the excellent fitness of the helicopter for operation in Afghan conditions, that made the choice in favor of the Mi-17 absolutely reasonable and natural.

However, a year after the signing of the first contract for the supply of Mi-17 helicopters, the Senate appealed to the Pentagon to break the deal, accusing the Russian side of supplying weapons Syria. According to Senator John Cornine, the activities of Rosoboronexport, namely, the supply of weapons to Damascus, deserved the imposition of sanctions on the Russian supplier, and not the conclusion of billion-dollar contracts with him. In the summer of 2012, Congress even approved the Jim Moran amendment, which prohibited the US Department of Defense from cooperating with Rosoboronexport. After another 6 months, this initiative was supported by the Senate.

The senators included in the final US budget for 2013 a clause that ordered the military to stop paying for contracts that were concluded with the Russian side. Despite this, the Pentagon then managed to find a way out of the current situation, justifying the acquisition of Mi-17В5 helicopters by insisting on the official Kabul. "The Afghan military and technology are well acquainted with this machine, they will be piloted by military pilots who have flown on such helicopters before that," General Ray Odierno, who is the chief of staff of the US ground forces, explained the Pentagon’s position. The result of this was the canceled now contract for the supply of 15 helicopters Mi-17В-5 to Afghanistan totaling $ 345 million in 2014 year. 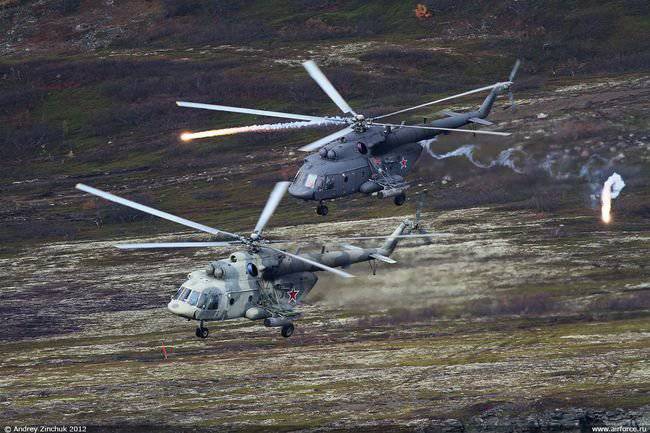 Reasons for canceling the last contract

Anyway, the Congressional Budget Committee voted against allocating funding to pay for the purchase of another 15 Russian helicopters; a whole group of American politicians joined the protests of Republican Senator Kornin. In particular, Senator Richard Blumenthal demanded the immediate annulment of the agreements. According to him, in the future it makes sense to allocate budget funds only for the purchase of American military equipment.

The position is quite understandable, given that the United States is one of the leading helicopter powers on the planet, and American companies do not want to miss the possibility of additional earnings. Counteraction to the agreements concluded with Russia for the supply of Kabul Mi-17 helicopters was conducted at the contract preparation stage, and later, as relations between the countries deteriorated (against the background of the crisis in Syria), it only increased. The imprint of problems with the US budget also imposes its imprint.

As a result, everything ended with the initiation of a criminal case on the purchase of Mi-17 helicopters from Rosoboronexport, the case was initiated in August of this year. The Pentagon is accused of purchasing military equipment from a Russian exporter at inflated prices. In support of the position, congressmen noted that Russia unnecessarily overcharged the prices of helicopters. According to their data, back in 2008, the price of the Mi-17 helicopter was at the level of 4,4 million dollars, whereas according to documents sent to Congress in June 2013, the cost of helicopters was already 18 million dollars per unit, plus the annual maintenance of machines, which was estimated at 4,8 million. 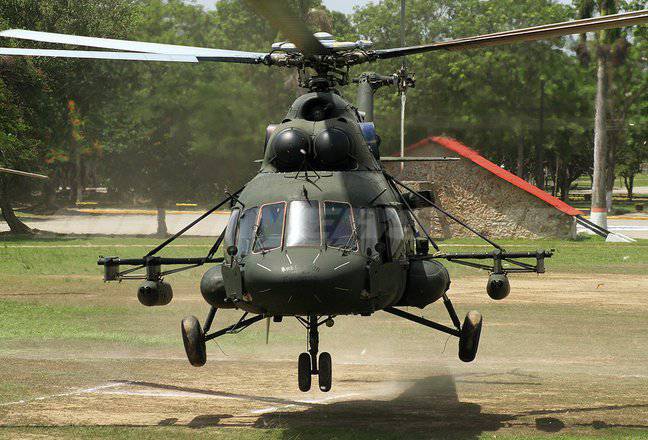 Also in the summer of 2013, the Pentagon’s investigations department opened a case of possible violations during the execution of the contract by the Russian side. It is reported that, at the insistence of Russia, the contract for servicing the machines was concluded with the AviaBaltika enterprise (St. Petersburg). According to the report presented by the Inspector General of the US Armed Forces, his subordinates were not allowed into the repair shops of the enterprise, and the repair of helicopters continued on the 12-20 month longer than it was planned. In addition, Rosoboronexport issued additional bills to the Pentagon in the amount of 16,4 million dollars.

Possible corruption from the United States is also being investigated. The main suspect is currently Colonel of the Air Force retired Norbert Verges, who oversaw the maintenance program for the Mi-17 helicopters. At the Pentagon, a retired colonel is suspected of having approved additional payments to AviaBaltic because of "personal interest." At the same time, the media write that the senators who wrote an open letter to the head of the Pentagon, Chuck Hagel, and demanded that the Mi-17 supplies be stopped, they may be financially interested in disrupting the deal. It is not a secret for anyone that such giants of the American defense industry as Boeing and Sikorsky spend a considerable part of the funds for the implementation of lobbying activities.

It is quite obvious that the US Department of Defense does not see the point in equipping the Afghan army with the latest American helicopters. Most likely, this is only the acquisition of used Mi-8 helicopters, which were in service with the former Warsaw Pact states, and today the US allies in the NATO bloc. Such helicopters will be able to undergo modernization and repairs at American enterprises, while the Afghan military will continue to receive equipment familiar to them, but not from Russia.

Ctrl Enter
Noticed oshЫbku Highlight text and press. Ctrl + Enter
We are
Russian arms exports. March 2017 of the yearProjection of force
14 comments
Information
Dear reader, to leave comments on the publication, you must to register.