November 19 2013
9
Everyone knows that the Second World War brought a lot of new developments in the arms world and even made it necessary to radically reconsider some moments of military operations, just as it changed the view on weapon soldier. Due to the fact that the Germans showed the effectiveness of the intermediate cartridge and the weapons under it, the idea that lived in the heads of the designers materialized into quite real and effective ammunition. In this article we will try to get acquainted with the patron and the submachine gun under it, which were to become the main means of destroying the enemy for the army of Great Britain, but for a number of reasons not belonging to the world of weapons by any side, which did not become widespread.

As you know, Germany was the first to realize the idea of ​​an intermediate cartridge in a more or less serial model, which proved to be effective, while the rest of the countries, although they had quite successful designs, still conducted the process of working on weapons very slowly. After the end of the Second World War, Great Britain, like many other countries, came to grips with the development of an intermediate cartridge and weapons for it. Looking ahead, immediately worth noting that the result was very good, if not excellent for that time.

I think it’s worth starting with an ammunition, since it is he who sets the main characteristics of the weapon. After the Second World War, the British had just two ammunition, which claimed the place of the intermediate cartridge. Their caliber was .270 and .276. Since it was rather costly to develop in parallel, a cartridge with a thicker bullet, namely, an .276 caliber cartridge was chosen. Subsequently, the caliber of the ammunition "rounded", and he became known as .280 British, although the real caliber was 7,23 millimeters, the bullet was also packaged in a sleeve length 43 millimeters. We can not say that the development of the ammunition went smoothly, in order to achieve an excellent result, experts from the Belgian company FN were invited, and even Canadians were involved. In general, they did not disdain any help and for what reason. 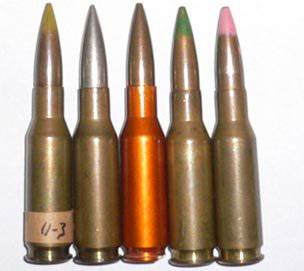 Despite the apparent success that the ammunition expected, one country with a name of three letters was not satisfied with the fact that it was the British cartridge that could become mass, and not the one that was produced from them. At first, the United States flatly refused to accept ammunition in caliber smaller than 7,62, to which the UK decided to try to find a compromise and change its ammunition, fitting it to the requirements of the picky "ally". There was even an attempt to use the bottom of the cartridge case T65 (7,62x51), but could not be persuaded. In the end, the United Kingdom adopted the .280 British armament for all, despite the pressure of other countries, and after a short period of time removed it from service and passed on the well-known 7,62x51. It is noteworthy that in the subsequent ammunition 7,62x51 was considered excessively powerful and 5,56x45 appeared. But what is even more interesting, the modern 6,8 Remington, which is considered to be much more efficient compared to the 5,56, is similar in its characteristics to the British patron. It is clear that a completely successful ammunition was not abandoned, and it was produced for the same civilian market in various variations, but the army did not receive it. Here is such a squiggle.

No less interesting was the weapon that was designed for this ammunition. Strangely enough, but the first model, which was designed, was in the layout of the bullpup, and the British began to fashion this layout. It was designated as EM2. Developed a weapon under the direction of Edward Kent-Lemon in Anfield. The basis of the weapon was the automation with the removal of powder gases from the barrel with a long piston stroke. Locking the bore before firing was done with the help of two diverging into the sides of the lugs, which entered into the clutch with the receiver of the weapon. Locking occurred due to the fact that inside the bolt after it was stopped in the forward position, the firing mechanism under the influence of the return spring continued to move. It was he who put forward locking stops. When fired, the piston first moved the trigger back, the stops were removed, and after that the shutter itself began to move. It cannot be said that the system is new and revolutionary, but interesting enough. Such an automation system, when the shock trigger was placed in the full body of the bolt, contributed to the high reliability of the weapon with dirt, since the dirt simply could not get inside, respectively, the reliability of the device was quite high with the proper approach to production, which is already a “plus” for this sample .

In addition to the automation system, an interesting point in the weapon can be considered as the fact that the main sight was a small-scope optical sight, although along with it there were also open sights, which were “just in case”.

The total length of the weapon was 889 millimeters with a barrel length 623 millimeter. The weight of the device was equal to 3,4 kilogram. The guns were fed from magazines with a capacity of 20 cartridges, which were spat out at a speed of 600 shots per minute. Effective fire could be conducted at distances up to 650 meters.

Based on the foregoing, it is safe to say that not only we had gunsmiths who were ahead of their time, and not only we really buried good and effective samples. However, in this case it may even be quite good.