November 19 2013
8
In October, 1964, China conducted tests of its own first nuclear warhead. Over the years that have passed since almost 50, Chinese experts have created a large number of new nuclear weapons and conducted a lot of tests. In addition, in recent decades, China has signed several international treaties relating to nuclear weapons. So, in 1992, the official Beijing ratified the Treaty on the Non-Proliferation of Nuclear Weapons. In 1996, China acceded to the Comprehensive Nuclear-Test-Ban Treaty. In addition, in the nineties, the Chinese leadership announced some new commitments. As a result, to date, China is obliged not to use nuclear weapons first, and also not to threaten their use by countries that do not have nuclear weapons or belong to nuclear-free zones. 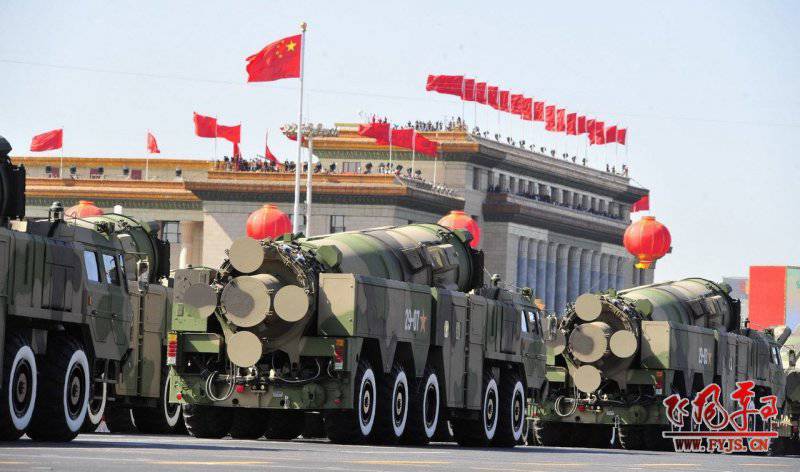 In the middle of the two thousandth, the Chinese Ministry of Defense issued a document called the White Book. Among other things, it argued that China, at present and in the future, is not going to abandon the current policy of using nuclear weapons, and the Chinese military will not use them first. The White Paper also noted that the number of deployed and non-deployed nuclear weapons would remain at the minimum necessary level. In this case, however, the exact value of the "minimum required level" was not called. There are various estimates of the number of nuclear warheads in China, but the exact number of ammunition remains classified.

Apparently, China learned some lessons from the Cold War between the USSR and the USA, and the result was some statements regarding the use and numbers of nuclear weapons. Keeping secrecy, Beijing is trying to make soothing statements and in every way shows its peacefulness. However, the refusal to disclose information on the quantitative and qualitative aspects of strategic nuclear forces, as well as some predictions regarding future events, give rise to various suspicions.

The lack of official information leads to the appearance of various versions. Thus, in various analyzes of recent years, the number of nuclear warheads used in China’s strategic nuclear forces is estimated to range from 50-80 to 1500-2000 units. At the same time, figures close to the lower or upper limit of this range are most often considered incorrect, since in these cases we can talk about a significant underestimation or overestimation of estimates compared to the actual number of charges. In the middle of the two thousandth, representatives of official Beijing said that the total number of Chinese nuclear charges did not exceed that of the armed forces of Great Britain. Thus, it could be assumed that there are no more than 200 warheads in China’s nuclear arsenals.

In 2011, employees of Georgetown University (USA) made a sensational statement. The result of their research was more than a bold estimate of the volume of Chinese nuclear arsenals. It was argued that the Chinese armed forces could use up to 3 thousands of nuclear warheads. It was also said that China has a network of underground tunnels with a total length of about 3 thousand miles, which can move the tractors with ballistic missiles. Naturally, Beijing did not confirm or deny the findings of Georgetown analysts. However, soon began to appear new assessments of the Chinese nuclear shield. Various analysts "counted" at least 10 thousand nuclear warheads. As before, the Chinese leadership did not comment on such assessments.

There is a technique that allows an approximate representation of the number of nuclear warheads in China. According to different sources, from the end of the sixties to the beginning of the nineties, Chinese enterprises produced no more than 40-45 tons of highly enriched uranium and 8-10 tons of weapon-grade plutonium. Thus, for all history The Chinese nuclear program could produce no more than 1800-2000 nuclear charges. For obvious reasons, only a small fraction of this number of warheads is currently deployed. Of course, the consumption of uranium and plutonium depends on the design of a particular charge, but in the case of the simultaneous existence of three thousand ammunition, in light of the available data on the production of fissile materials, we can talk only about tactical nuclear weapons, but not about strategic ones.

Another method of estimating the amount of nuclear charges is the analysis of the goals of strategic nuclear forces. In 1965, Mao Zedong noted that only six atomic bombs would be enough to ensure strategic containment. He meant that the use of even six charges would destroy the most important cities of the enemy and thereby cause irreparable damage to him. At the end of the last decade, several studies emerged, the authors of which attempted to establish the amount of nuclear warheads necessary for China to cause unacceptable damage to nuclear powers. According to this research, the Chinese military will need 90-100 warheads to destroy important US facilities. To destroy Russian objects - 50-60. Finally, no more than 20-30 nuclear warheads are needed to damage Britain, France and India. Thus, for effective deterrence of countries possessing nuclear weapons (by the time these studies emerged, China has already declared that such weapons are not used against nuclear-free powers) only 200-210 deployed warheads are needed.

Despite the development of technology, modern nuclear warheads have limited shelf life. The leading countries of the world were able to bring this parameter to 20-25 years, but other nuclear powers have not yet achieved such success. Thus, the number of deployed nuclear warheads no more than 200-250 units and the total number of such ammunition no more than 400-500 looks most likely in light of the available information.

China’s nuclear arsenals, regardless of the exact number of warheads available, show one interesting feature of the Chinese deterrence strategy. The available number of deployed warheads is enough to destroy targets in the territory of potential enemies. At the same time, unlike the United States or Russia, China has only a few hundred charges, which accordingly affects the costs. An additional factor that can reduce waste is the rejection of the use of nuclear weapons against states that do not have such weapons. Apparently, Beijing understands the low probability of an atomic war and therefore uses nuclear weapons solely as a means of deterring some foreign countries and at the same time tries to save on its production and maintenance.

In the foreseeable future, namely, before 2021 (the completion of the second phase of the current military reform), no serious changes in the quantitative or qualitative aspects of the Chinese strategic nuclear forces are expected. China’s nuclear shield will remain as few but effective and capable of accomplishing the tasks assigned to it. In the future, it is possible to increase the number of ballistic missiles, bombers and nuclear warheads, as well as a corresponding change in the strategy for their use. However, at the moment, China does not seem to have all the necessary resources for this, and so far it will have to be content with relatively small but effective strategic nuclear forces.