November 19 2013
98
Police are voluntary armed groups of citizens in places where state influence is weak or absent. In modern Russian, the word “militia” carries a slightly different meaning, and it would be more correct to translate this word as “militia”. And, since the problems associated with the arming of the population are often discussed at this resource, I would like to consider the mentioned public phenomenon in more detail. 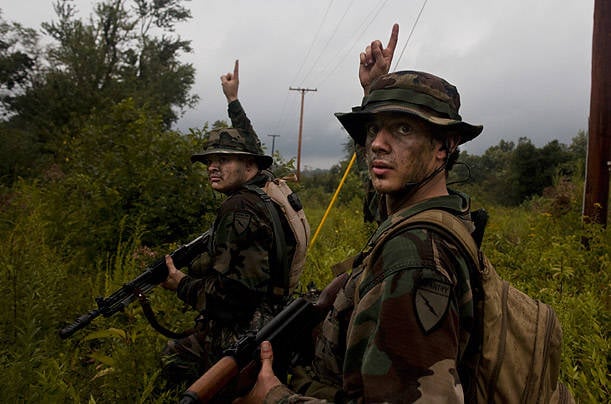 The most widespread movement of "militias" has received in the United States, where it conducts its history from the time of the war of independence, from about 1775, when the armed settlers ’self-educated groups were ready,“ per minute ”to defend their home or to assist the regular army. 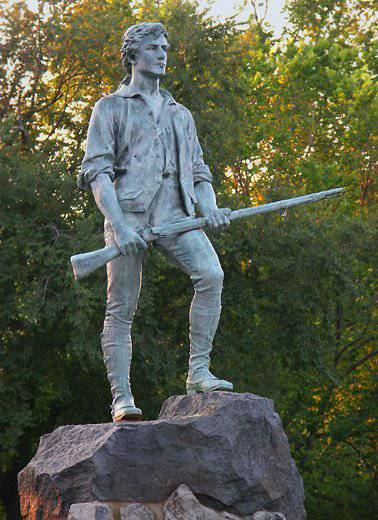 (Monument to the militia in Lexington, Massachusetts, where the first shots of the war of independence were played.)

In the United States itself, the attitude towards the militia is far from clear: many believe that these people put the interests of the individual above the interests of the state, they are not tolerant and do not accept multiculturalism and globalism. Others consider them to be the “last line of defense” against the American state, whose actions are sometimes aimed not at the benefit of citizens. The aspirations of the militias themselves are most fully expressed in the translation (perhaps not very precise), which I would like to quote here:

"Our goal is to return to the original ideas of the constitutional republic, such as it was to the founding fathers. To the individual freedoms guaranteed by the Bill of Rights, to the restrictions imposed by the text of the Constitution on the federal government.

We are patriots, but we don’t like what our government does. We believe in the American dream, in the right of private property, even if it is just a small house and two cars per family, a better life than ours for our children.

We believe in the eternal ideals that have made America a great power: Freedom, Justice, Morality, Respect for the Constitution. Progress in many areas could bring us closer to our dreams, but this did not happen ... We must bring America back to its original values ​​in order not to lose it!

Many years ago, Rousseau (not Abraham. - Approx. Author) said: America became great because it became a carrier of good. There will be no Good, there will be no greatness! You can verify this remark right now. Since the Second World War, despite the mountains of our high-tech weapons, money and power, we suffer one humiliating defeat after another. Our government protects the interests of transnational corporations, protects the price of the blood of our children, the loss of jobs, the decline in our standard of living.

The reasons for which we cannot win are for the vicious purposes of our government ... Our soldiers do not understand why they shed blood, our opponents know what they are fighting for, and they fight decisively and selflessly ... Such an opponent cannot be defeated! If you need examples, read about Korea, Vietnam, Cuba, Nicaragua, Somalia, Iran ... Afghanistan and Iraq will soon be added to this list. We need to break this vicious chain and use our resources to make America the best country in the world! "

The list of "likely opponents" of the militia is quite diverse. In connection with the collapse of the USSR, his place of the “Empire of Evil” is gradually taking China. Here, North Korea, al-Qaeda, terrorists, Jewish world capital, and even the British royal family, allegedly secretly administering the States. With the disappearance of the threat of world communism, America has a new enemy - the New World Order, "which, for the sake of usurers and their minions, will finally bury traditional values," they say. 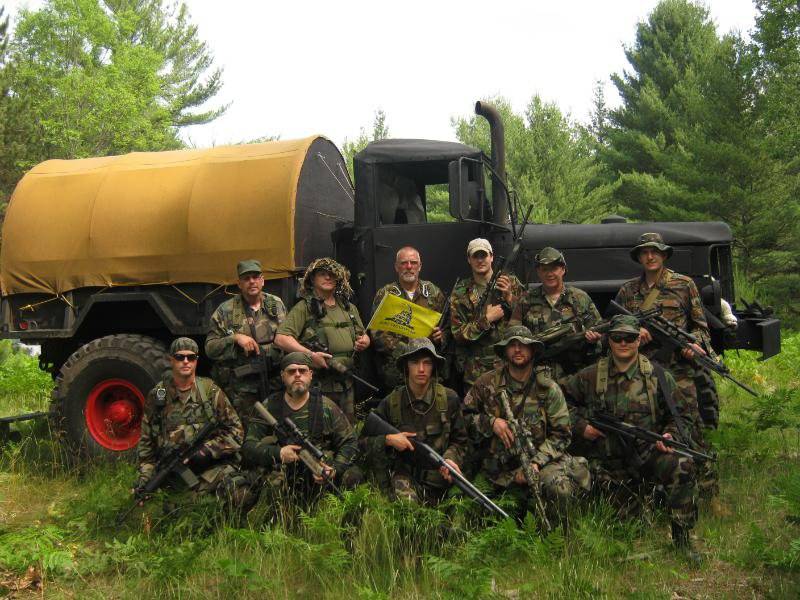 The exact number of militias is not taken to count one, it ranges from 30 thousands to half a million, and these are only overt supporters. Recently, in their ranks, politicians, military writers began to notice more and more often ... and the reason for this has not yet been revealed.

Military training of militias varies in level, but, in general, is regarded as not too high. That, however, may change in the near future, as their ranks are replenished with veterans of the army and marines who have experience in hostilities and are ready to share it with like-minded people. On arms of formations consist t. tactical carbines (self-loading, such as AR -15, М14 Garand, SKS, AK-oidy, "combat" shotguns), they use in their training army and police equipment. At the initial level, the militiamen are trained on orienteering, masking, shooting, survival in natural conditions, guerrilla tactics. Militiamen acquire all weapons, uniforms, equipment and ammunition at their own expense, although in some states money is allocated for this from the local budget. For participation in gathering, patrolling, protection of events and territory, money is not paid ... everything is exclusively on a voluntary basis. 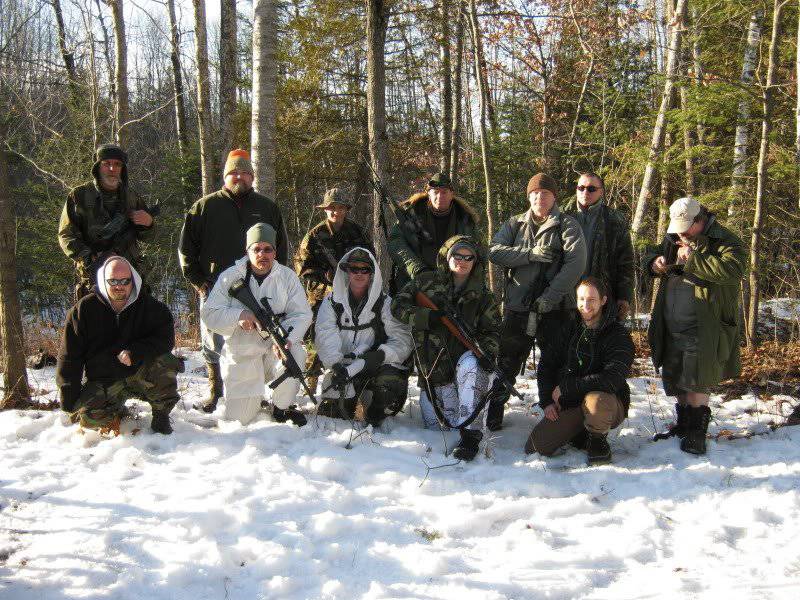 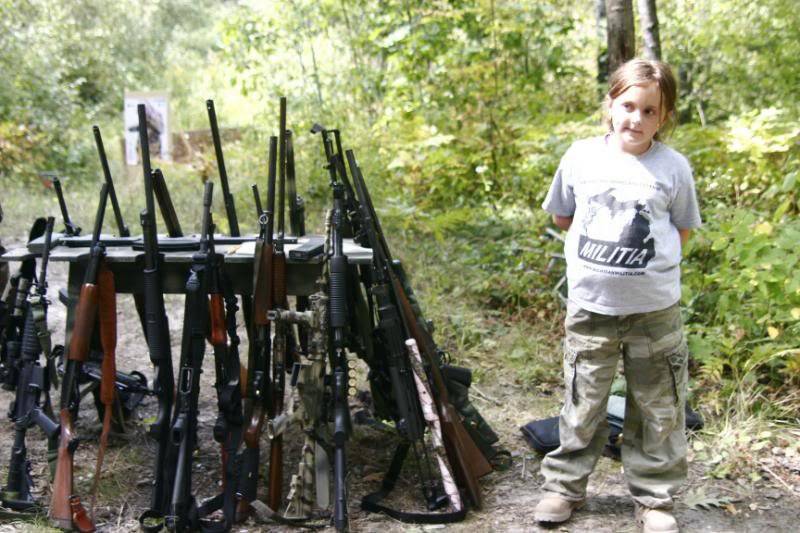 The most active militia groups are organized in states bordering Mexico, which is understandable in general - the flow of illegal migrants is increasing year by year, and the border service is not able to cope with it.

“You have no idea what is happening here! Farmers living along the border, keep the defense themselves and voluntarily go into the militia,” says one of the ranchers. “This is a good idea - the militia! Moreover, no budget funds are needed to finance it! ”According to him, young people in the state find it difficult to find a job: vacancies are occupied by illegal immigrants, and his wife’s“ labor migrants ”almost robbed: the rescued militia patrol saved her.

"My guys in the squad are both farmers and veterans, people who are not afraid to use weapons," says the head of the patrol team, William Davis. persons. "

Arizona Governor Janice Brewer said: "What we have on the border of Mexico and Arizona is a rebellion! And we have thousands of volunteer patrolmen who have vowed to close the border ..." 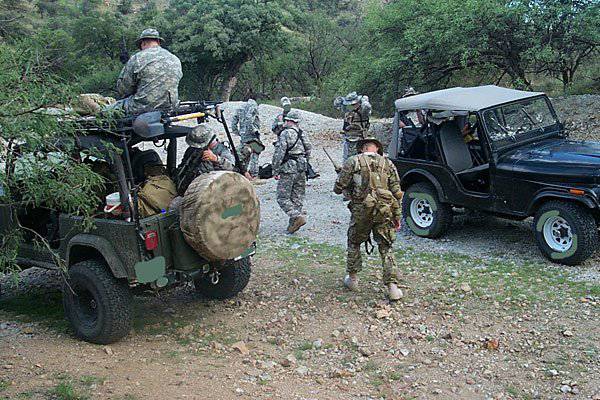 Is it possible to create such a militia in Russia? Hardly ... There is no article in our Constitution, similar to the Second Amendment, and meanwhile, when the law enforcement system in the country is in distress, volunteers who work not for salary but for the safety of their families and their very existence could have a serious impact on the situation in the country. So should we be afraid of the "man with a gun"?

Ctrl Enter
Noticed oshЫbku Highlight text and press. Ctrl + Enter
We are
About Stalin and KhrushchevSaratov club "Patriot": not to be afraid of the enemy and love the Motherland
98 comments
Information
Dear reader, to leave comments on the publication, you must to register.