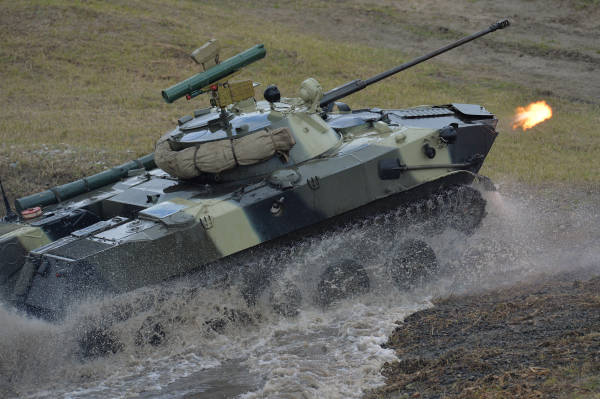 Earlier, the chief paratrooper of the country, Colonel-General Vladimir Shamanov, said that "the use of automated control systems in incoming samples of armored vehicles allows us to implement control in a tactical and operational link at a new qualitative level." Apparently, we are talking about the Andromeda-D complex, which at the end of last year confirmed the high performance and operational capabilities of the experimental command and staff training near Ivanovo.


It was specially organized to see how new telecommunications equipment provides for the communication and control of airborne units on the ground in real time. To check all parts of the ACS at two Moscow sites - in the command of the Airborne Forces and the General Staff - deployed control centers. From there, the generals in a videoconference mode led the training and from a distance of more than 300 kilometers they observed the course of a tactical rally, in which paratroop and reconnaissance units participated, as well as the airborne troops of the 98 air defense division.

To test the complex in the field near the village of Nikolskoye in the Ivanovo region deployed two modules of the automated control system "Andromeda-D" and complexes of the automated system "Flight-K". In addition, the Rheostat automated control system and the Barnaul-T air defense system were involved in the unified system of command and control of the troops. The head of the training - the chief of staff of the Airborne Forces, Lieutenant General Nikolai Ignatov, highly appreciated its results.

“The prototypes of the control modules that we tested in a single segment of command and control of the troops ensured that all the tasks were completed with high quality,” the military commander said later. - The system works confidently and efficiently. The main thing is that we are developing the practice of using the automated control system, increasing skills in the use of high-tech equipment at all levels when performing combat training tasks.

"Andromeda-D" is a complex of automation equipment for equipping stationary and mobile control points, created taking into account the peculiarities of the Airborne Forces as a highly mobile kind of troops. This system can provide effective management of units in any situation using the most advanced digital telecommunication equipment.

Troop tests "Andromeda-D" completed at the end of 2011. And during the past year, the ACS was successfully used in the tactical exercises of paratroopers, including during the Kavkaz-2012 strategic maneuvers. There, with its help, the generals in real time led the units and formations of the Airborne Forces, which operated at a distance of over 1500 kilometers.

In addition, Andromeda-D was successfully tested for compatibility with the ACS of the Land Forces, the Air Force and higher headquarters in the overall control system of the Armed Forces of the Russian Federation. In total, the landing command more than 60 once used its digital telecommunications equipment and video conferencing last year.

The serial delivery of Andromeda-D and Poleta-K to the airborne troops will begin in the coming months.

Ctrl Enter
Noticed oshЫbku Highlight text and press. Ctrl + Enter
We are
ACCS “Andromeda-D” reaffirmed its high efficiency
8 comments
Information
Dear reader, to leave comments on the publication, you must to register.