Chinese experts responded to the transfer of the aircraft carrier "Vikramaditya" 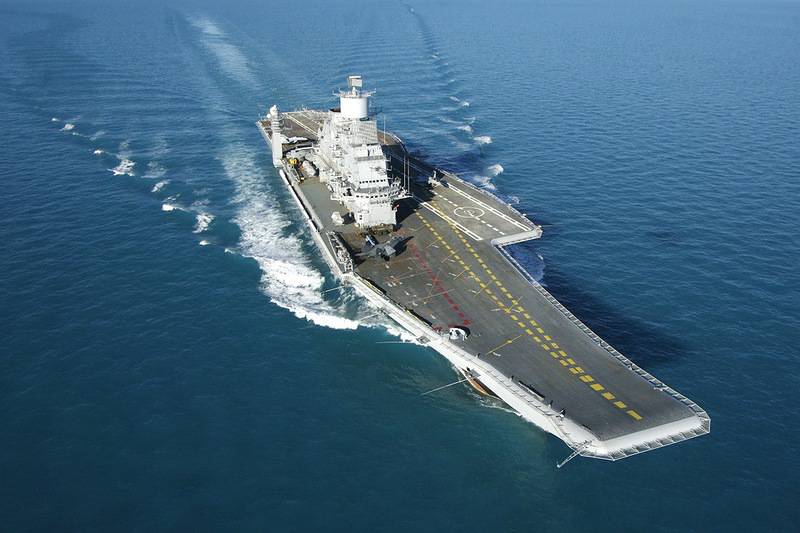 In the 1994 year, due to the lack of financial resources, Russia offered India to acquire the aircraft carrier Admiral Gorshkov. The contract was signed in 2004, the initial estimate was increased from 400 million to 700 million dollars, then to 1,5 billion dollars with a transfer date in 2008 year.


However, the repair and modernization of the ship was delayed, which was the reason for the difficult negotiations between the two parties. In 2010, the parties agreed on the amount of 4,33 billion, including the supply of 45 deck fighters MiG-29K to the sum of 2 billion dollars with the transfer of the ship in December 2012. However, during the sea trials, a boiler-turbine power plant crashed, and the delivery date was again postponed. Finally, yesterday the ship was transferred after the 6-year delay.

Vikramaditya has the largest displacement 45 thousand tons, length 283,3 m, maximum width 59,8 m, 30 fighters MiG-29K, as well as anti-submarine Ka-27 helicopters and helicopters of the radar patrol Ka-31 can be placed on it. The crew of the ship 2000 people.

Indian media write that "Vikramaditya" will become the flagship of the country's Navy, will ply in the Arabian Sea to demonstrate the military power of the state. “This is a moment of pride for the country,” write Indian publications.

However, Chinese military experts say that this aircraft carrier without an escort group in the form of warships equipped with the Aegis system or their analogue (the PLA Navy has such ships) significantly reduces its value. Expert Zhen Wenhao said that although the Indian Navy has many years of experience in operating aircraft carriers, they have never had carrier strike groups. He said that the United States could sell India decked DRLO aircraft of the E-2D Advanced Hawkeye type, equipped with the latest radar with active phased array, and then the combat capability of the Indian Navy will grow significantly. “Nevertheless, the Americans believe that the Hokai cannot be based on the Vikramadithi, which has no takeoff catapults, and these aircraft can be based only on the coast. But in fact, as the calculations showed, subject to the presence of headwind, an E-2D aircraft with engines of increased power can take off from an Indian aircraft carrier, but the Americans probably do not want to significantly increase the capacity of the Indian Navy, ”said the expert. Without a DRLO aircraft, an aircraft carrier cannot have a high level of situational awareness, which will adversely affect its combat potential.

Regarding the fleet review, Chinese experts believe that the MiG-29K fighters are significantly inferior in their combat characteristics to the American F / A-18E / F Super Hornet and the Chinese J-15, especially in range, flight duration and combat load.

Both Chinese "Liaoning" and Indian "Vikramaditya" have both advantages and disadvantages. But the Chinese aircraft carrier has a much larger displacement, based on it the J-15 fighter jets, which have a take-off weight of up to 30-35 t, whereas the MiG-29K can take off with a mass of just 20 t. In addition, for the "Liaoning" a conservation group in the form of Type 052D class destroyers, equipped with a powerful air defense system and missile defense.

Ctrl Enter
Noticed oshЫbku Highlight text and press. Ctrl + Enter
We are
"Admiral of the Fleet of the Soviet Union Gorshkov" of the 22350 project - transition from St. Petersburg to KronstadtModernization of BMD
62 comments
Information
Dear reader, to leave comments on the publication, you must to register.