November 20 2013
2
By the beginning of 1943, the command of Nazi Germany realized that the threat from enemy bombers required the search for a new means of dealing with it. Fighter aviation with guns and anti-aircraft artillery could effectively resist the attacks of bombers, but the effectiveness of such a fight in the future was doubtful. In this regard, the Imperial Ministry of Aviation initiated several promising projects to create rocketry designed to destroy enemy aircraft. German engineers began developing several anti-aircraft missiles and air-to-air guided munitions. One of the new developments was the Ruhrstahl X-4 aircraft missile. 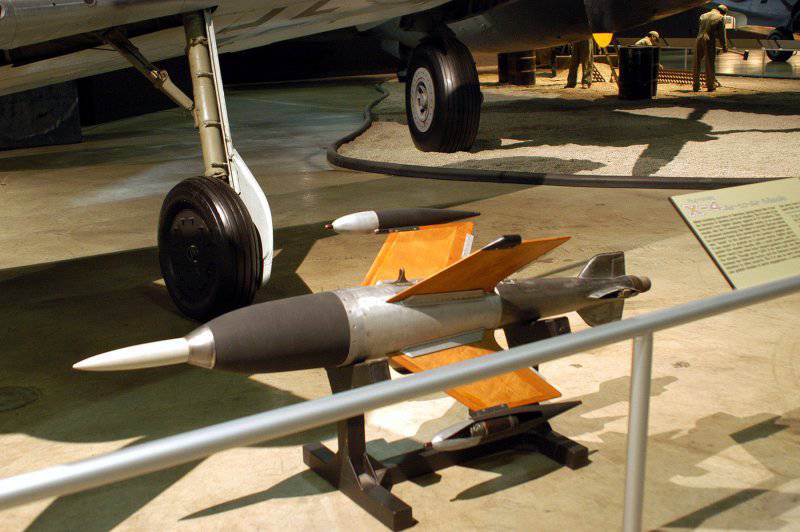 Analysis of several preliminary projects allowed to determine the most convenient aerodynamic appearance of the rocket and the layout of its internal volumes. It should be noted that the used layout solutions with some modifications later actively used by designers from different countries. All the main elements of the equipment were placed inside the body of a cigar-shaped form. A characteristic elongated fairing was placed in its nose, four wings in the middle, and an X-shaped stabilizer in the tail. The design of the hull, wings and rudders of the promising X-4 rocket was created taking into account the fact that the product will be assembled by workers with low qualifications. Probably, this particular feature of the project allowed to collect a fairly large number of new missiles in 1944-1945.

The X-4 rocket, in comparison with other German guided weapons, turned out to be relatively light and compact. With a total length of just over two meters, the fueled rocket weighed 60 kg. The diameter of the largest part of the hull was equal to 0,22 m, and the wingspan exceeded 0,72 m. The rocket body was proposed to be made of three extruded aluminum parts, and the wings were made of plywood.

Acoustic fuse Kranich was placed in the characteristic nose deflector of the rocket. It was assumed that this device, tuned to the frequency of the sound of the B-17 bomber engines, would undermine the warhead at a distance of about 7 meters from the target aircraft. At this distance, the 20-kilogram warhead could seriously damage or destroy the target. In case of failure of the acoustic fuse, the X-4 rocket received an additional pin.

In the middle of the hull placed tanks for fuel (capacity 2 liters) and oxidant (4,5 liters). Next to the tanks, we made room for a cylinder of compressed air, which was used by the fuel and oxidant pressure system. This placement of tanks has reduced the centering changes as the fuel production. During the flight, the rocket's center of gravity almost did not move along its longitudinal axis. The pipelines brought fuel and oxidizer to the liquid-propellant rocket engine placed in the tail section of the rocket.

The BMW-Flugmotorenbau 109 448 engine was selected as the power plant. This engine, using R-Stoff fuel and S-Stoff oxidizer, could provide thrust up to 17 kg for 140 seconds. Despite the acceptable characteristics, the liquid engine did not look too comfortable for use in the military. The use of aggressive fuel components (for example, the S-Stoff oxidant on 95% consisted of nitric acid) could significantly complicate the operation of missiles in parts of the Luftwaffe. For this reason, from the very beginning, attempts were made to equip the X-4 rocket with a solid-fuel engine. There is information about the work on the modification of the rocket using the Schmidding 109-603 engine with thrust parameters at the 109-448 liquid level, but with shorter duration of work.

Due to the complexity and cost of other options, the X-4 rocket received a wired FuG 510 / 238 remote control system. At the ends of the two wings there were end fairings, inside of which there were reels with wires. After the launch of the rocket, the wires were unwound and ensured the transmission of the signal from the control panel to the rocket equipment. For control of roll and pitch used steering wheels located on the tail stabilizer. The pilot of the carrier, using his control panel, had to direct the rocket using the three-point method. The task of the pilot was to remove the rocket to the minimum distance from the target. After the distance was reduced to a minimum, the automatic rocket independently produced undermining the warhead. For the convenience of the pilot at the ending of the two wings there were signal lights. 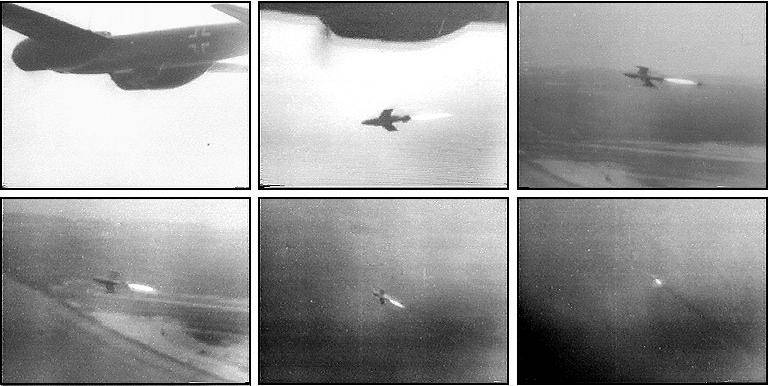 The characteristics of the BMW 109-448 fluid engine allowed the X-4 rocket to accelerate to 1100-1150 kilometers per hour. The effective target destruction range did not exceed 1,5-2 kilometers, but the calculated value of this parameter was much higher. So, on two coils placed on 5500 meters of wire with a total weight of about 5 kilograms. However, the main problem associated with the increase in flight range was not the length of the wires, but the observation of ammunition.

In conditions of real air combat, the Ruhrstahl X-4 rocket was proposed for use as follows. The fighter pilot had to go to the tail of a group of enemy bombers and, having approached a distance of no more than 2-2,5 kilometers, to launch a rocket. Then, using the control lever, it was necessary to hold the rocket on a trajectory, the end point of which was the target. Acoustic fuse significantly simplified the work of the pilot.

11 August 1944, the first test launch of the new X-4 missile took place. A modified FW-190 fighter was used as a carrier aircraft. These tests showed the advantages and some disadvantages of the applied technical solutions. First of all, once again the complexity of the operation of liquid rockets was confirmed. In addition, the X-4 rocket was not very convenient for use on single-seater fighters: simultaneous control of the aircraft and pointing the rocket at the target turned out to be quite a challenge. In this regard, there was a proposal to use the modified Ju-88 bomber as a missile carrier. At the same time, plans for equipping the Me-262 fighter jet with the necessary equipment remained relevant. In the future, the Ruhrstahl X-4 missiles were to become the main armament of the Focke-Wulf Ta-183 Huckebein fighter, which, however, remained on paper.

Tests of the new air-to-air missile lasted until February of the 1945 year. In December, 44 was decided to start mass production of new ammunition. It should be noted that before the tests began, more than 200 new missiles were manufactured. According to various sources, Ruhrstahl Allgemeine Gesellschaft managed to assemble several hundred X-4 missiles in total, but their exact number remains unknown. The total number of manufactured products in different sources ranges from 1000 to 1300 pieces. It was supposed to produce more missiles, but the anti-Hitler coalition bombers destroyed the plant, which produced liquid rocket engines. In this regard, the production of missiles Ruhrstahl X-4 stopped. Shortly before the production of the X-4 missiles was stopped, in February 1945, the assembly of other controlled air-to-air weapons was discontinued. According to the results of comparisons rocket Henschel Hs-298 was recognized as less promising and discontinued. Thus, the destruction of the BMW plant led to the complete cessation of the manufacture of German aircraft missiles.

Information about the combat use of guided missiles Ruhrstahl X-4 is missing. Probably because of the problems at the front and in the rear, these munitions never arrived in units. The finished missiles were destroyed during the fighting, and the few remaining items became Allied trophies.

After the war, the French designers, using the obtained missiles and documents, attempted to create their own version of the X-4 guided missile. Project AA-10 turned out to be ambiguous. In 1947-1950, the French industry manufactured about 200 rockets, after which the project was closed. Already at the stage of testing individual units, French specialists faced exactly the same problems as the Germans several years earlier. The fuel and oxidizer used were too aggressive for use in aircraft weapon systems. Due to safety issues, the AA-10 rocket was declared unsuitable for use.