November 19 2013
3
The German company Henschel began work on the creation of rocket systems in the second half of the 1930s. The greatest success of the German designers managed to achieve only in the forties, after Professor Herbert Wagner came to the company. It was under his leadership that several projects of guided missiles and bombs were created. At the same time, projects of guided bombs and missiles for various purposes were being worked out. So, already in 1940, Henschel employees considered the possibility of using guided missiles to destroy enemy ships and aircraft. In the latter case, two ideas were immediately suggested: launching a guided missile from the ground and equipping an aircraft carrier with similar ammunition. 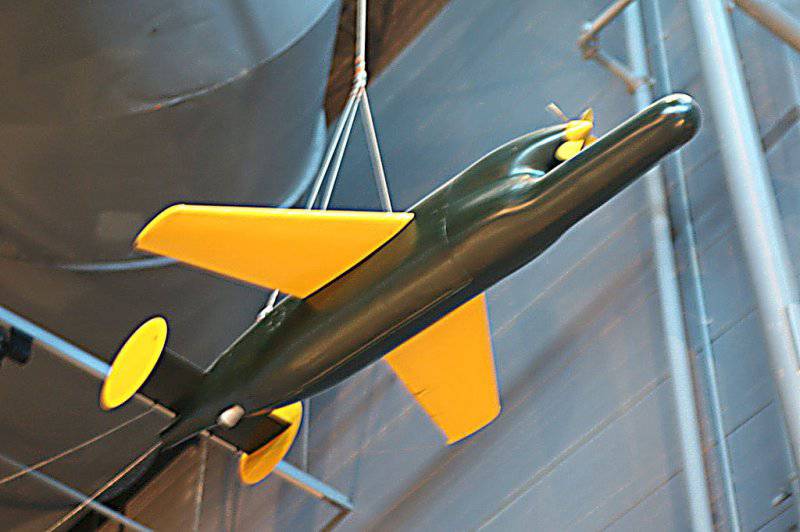 The first version of the preliminary design of a promising air-to-air missile appeared in 1941, but it did not interest the potential customer in the person of the Imperial Ministry aviation. At that time, the German command was extremely optimistic about the prospects of its armed forces, and therefore weapons projects, which were intended primarily to protect against enemy bombers, did not receive appropriate support. A few months after this, regular allied raids on German industrial facilities and infrastructure began, which made Berlin change its mind.

In 1943, the Ministry of Aviation ordered the Henschel company to develop and manufacture a guided missile designed to destroy enemy bombers. It was assumed that the new rocket Hs-298 will be used in a special way modified aircraft. The team of engineers led by G. Wagner already had a lot of experience in the development of guided weapons, but the creation of a munition suitable for use by aircraft, caused some difficulties.

The requirements of the customer and the available developments have determined the shape of the future air-to-air missile. From the point of view of aerodynamics, the Hs-298 rocket was a projectile with a swept wing of small elongation. A similar aerodynamic layout has already been used in previous guided weapons projects developed by Henschel. The fuselage of the new guided munition was created taking into account the layout solutions used in the Hs-177 Schmetterling anti-aircraft missile project. Its design can be divided into two streamlined body, stacked on each other. This form of the fuselage allowed to increase the internal volumes without appreciable loss of aerodynamic characteristics.

To the fuselage with a length of about two meters in the middle part were attached to the wing console span 1,29 m. At the rear edge of the wing provided interceptors designed to control the roll. In the tail section of the rocket, it was supposed to mount a direct stabilizer with an interceptor that served as an elevator. At the ends of the stabilizer should have been keel washers. 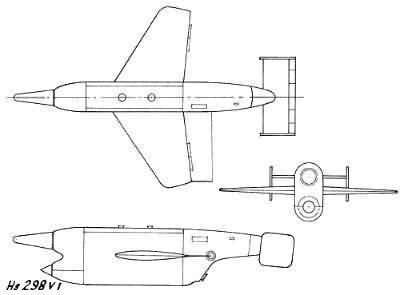 During the design of the fuselage missiles Hs-298 has undergone some changes. Initially it was assumed that the lower nose cone will have a greater length and go beyond the top. However, some features of the design and ease of use forced to change the appearance of the rocket: in later versions of the project, the upper fairing, in which a part of the equipment was located, came forward. According to some sources, the main cause of such changes was the impeller of the electric generator, originally located on the upper fairing. The dimensions of the impeller required the use of a rather complicated suspension design under the wing of the aircraft, due to which the generator was transferred to the lower fairing. The project modified in this way was designated Hs-298V-1.

At the bottom of the fuselage provided a place for the installation of a solid fuel engine. Despite the relatively short operating time, such a power plant provided sufficient reliability and ease of operation in the army. The Schmidding 109-543 solid-fuel engine could operate in two modes. For five seconds after the start, he developed 150 kgf thrust, and then 20 seconds worked with 50 kgf thrust. For this, the engine had two charges of solid fuel. The main charge of fuel with a low burning rate, necessary for operation in flight, was made in the form of a pipe. The internal surface of this charge was covered with heat-resistant material. Inside such a pipe, a starting charge of fuel with a high burning rate was placed. Thus, for several seconds after the start, the internal charge, providing greater traction, burned out, destroyed the coating of the external charge and ignited it. The total weight of the two charges of solid fuel exceeded 51 kilogram.

The solid engine of the original design took up almost the entire internal volume of the lower part of the rocket fuselage. In front of him in the version Hs-298V-1 there was only a small electric generator with an impeller. The combat unit and control equipment placed at the top of the fuselage. The rocket was supposed to be controlled by radio communication using the three-point method. Systems that had the designations Franken and Burgund were considered as a control complex. Next to the control equipment, a warhead weighing 25 kg was placed. The Hs-298V-1 project implied that the warhead would be undermined by an operator command.

It should be noted that simultaneously with the Hs-298V-1 rocket, its modification Hs-298V-2 was developed. This product was planned to be equipped with a Doppler radio fuse. A non-contact fuse could initiate an explosion of a warhead at a distance of 15-25 meters from the target, which was to ensure the high combat effectiveness of the new missile. The rest of the project Hs-298V-2 was similar to Hs-298V-1. 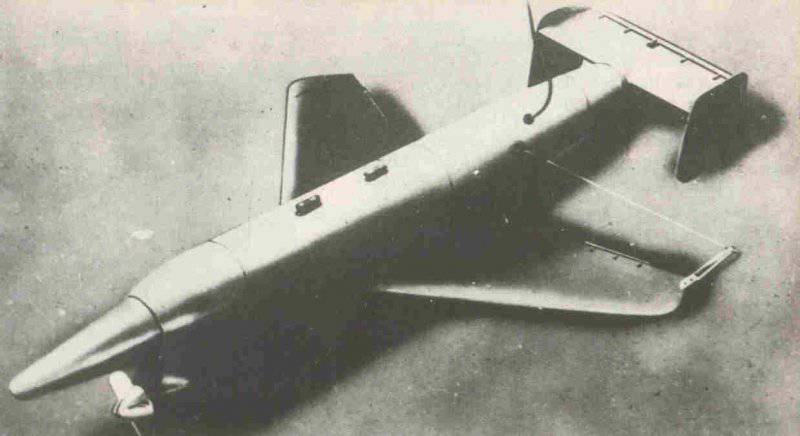 Like other German guided munitions, the Hs-298 missile received a missile-equipped control system. Such controls, having a greater drag in comparison with the rudders of traditional design, greatly simplified the technical side of the project. To control the pitch and roll only required two radio channels. The rocket did not have rudders. For the convenience of the operator-gunner in the tail of the rocket provided pyrotechnic tracer and light bulbs.

The operating parameters of the engine, as well as the capabilities of the existing control system, determined the method of using the new rocket. It was assumed that the carrier aircraft would enter the tail of a group of enemy bombers and launch a rocket from a distance of no more than 1,5-2 km. In this case, the operator, using the available optical equipment, could confidently take the missile to the target.

The development of the Hs-298 project took a lot of time. Rocket tests began only in December 1944. For test launches, a Junkers Ju-88 bomber was used, equipped with three missile suspension nodes and a set of necessary electronic equipment. The first launch of the rocket was unsuccessful - the product, dropped from the carrier plane, almost immediately exploded in the air. In the second and third launches, the control system failed, which led to the fall of the missiles to the ground. Finally, 22 December 1944, the crew of the carrier aircraft was able to launch the missile, bring it to a given area and undermine the warhead. Several subsequent launches confirmed the characteristics of the Hs-298V-1 rocket and the possibility of its combat use. Thus, it was this rocket that became the first air-to-air ammunition that completely passed all the stages of the tests.

At the very beginning of the 1945 of the year, the Luftwaffe ordered the 300 Hs-298V-1 missiles and more than 100 Hs-298V-2 for arming night fighter-interceptors. It was proposed to install the corresponding equipment on Ju-88 and Do-217 airplanes of various modifications. In addition, the size and starting weight (95 kilograms) of the rocket contributed to the start of work on the creation of a set of equipment for the Me-262 and FW-190 fighters.

According to various sources, the assembly of ammunition family Hs-298 began in January 1945 year, but accurate information about the number of manufactured missiles are missing. The assembly of the missiles was commissioned to the plant in the city of Wansdorf. Due to the declining capabilities of the German 6 industry, February 1945 of the year, the Hs-298 project was closed in favor of the more promising Ruhrstahl X-4 rocket. By this time, several dozen Hs-298 missiles of two modifications were assembled, which, however, did not get into the troops. Most of the finished products were destroyed during the battles for the city. A number of the surviving missiles went to the Soviet troops as a trophy.

Although work on guided weapons began in Germany in the late thirties, the Hs-298 rocket went into series only at the beginning of 1945. Because of this, she not only did not have time to have a tangible impact on the course of the war, but did not even get into the troops. Therefore, a promising project of an air-to-air missile echoed the fate of a host of other German developments. The only fact that distinguishes the Hs-298 from the general range is that the product became the first air-to-air device that was fully tested and adopted for service.