November 18 2013
57
The Great Patriotic War was marked unprecedented in stories massive heroism of Soviet soldiers. Private soldiers, commanders and generals — all, without distinction of rank or rank, tried to protect their homeland, even at the cost of their own lives. This was especially important in the first, most difficult and terrible months, when an armored wave of Wehrmacht troops rolled to the East. It seemed to roll inevitably, but as a result, it broke about the reefs, which for it became the Brest Fortress and Odessa, Kiev and Sevastopol, Moscow and Stalingrad ... And, of course, the Dubosekovo railway junction, which wasn’t known before 16 in November 1941. that the locals. Then the whole country became aware of it. 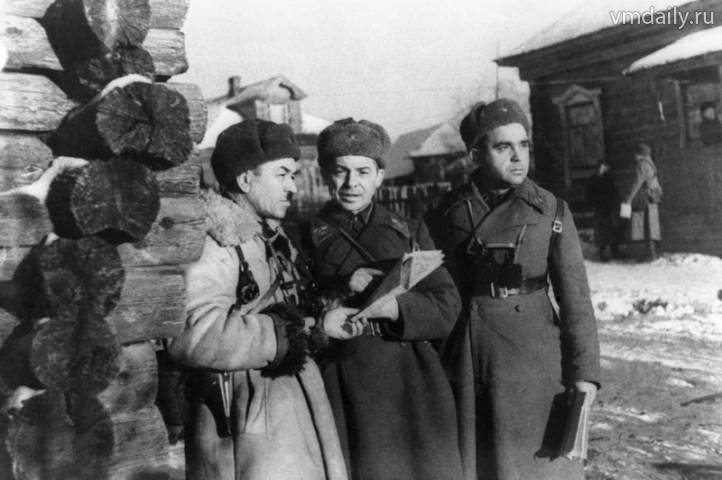 Fearless division commander - Hero of the Soviet Union, Major General Ivan Vasilyevich Panfilov (far left). According to some reports, the picture was taken on the day of his death.

Shortly before that, at the end of October, the first stage of the offensive operation called “Typhoon” was completed, the purpose of which was to capture Moscow. The Germans reached the nearest approaches to the capital, smashing three Soviet fronts under Vyazma. The tactical victory was won, and the Hitlerite generals decided to take a breather - the battered units in the battles had to wait for replenishment. Ko NNUMX November on the Volokolamsk direction stabilized the front line, the Wehrmacht troops temporarily went on the defensive, but this fact is not particularly worried about the Berlin strategists, because to Moscow and really, if you look at the map, it was a stone's throw. One more shot, one more blow of the tank "fist" - like dozens inflicted all over Europe ...

After a two-week lull, the Germans again launched an offensive, trying, by all means, to complete the next campaign in 1941. The new blitzkrieg was as close as ever, because the defensive line of the Red Army was dangerously stretched. But its role was played by the fact that no headquarters could have foreseen it.

On the Volokolamsk direction, the 41-kilometer front was defended by the 316th rifle division under the command of Major General Panfilov, the flanks of which were covered by the 126th rifle division on the right, and the 50th cavalry division from the Dovator corps on the left. It was at these "joints" on November 16 that the main blow of two German tank divisions, one of which went directly to the Dubosekovo area, at the position of the 2nd battalion of the 1975 rifle regiment of the 316th division.

This unit previously suffered significant losses, but it managed to come replenishment. Anti-tank guns were at his disposal (although most of them were not powerful enough), and the novelty was the ATGM anti-tank guns. They were handed over to a special group of tank destroyers in the amount of approximately 30 people under the command of 30-year-old political officer Vasily Klochkov, formed from the most persistent and accurate soldiers of the 4-th company of the 1975-regiment. They became famous Panfilov, to break the rapid offensive tank armada. From 54 tanks, while under constant shelling and bombing, during the battlefield of an hour of battle that lasted for 4, a handful of fighters destroyed 18 vehicles. The Germans considered these losses unacceptable and turned from the Volokolamsk direction. The enemy was stopped at the cost of life of the brave ones who did not pass the last frontier.

Already on November 27, the newspaper Krasnaya Zvezda reported on this feat for the first time, indicating that all the Red Army soldiers guarding the siding were 29, but one turned out to be a traitor and was shot by the others. In the years of “perestroika”, this figure was the reason for the attempt to “cancel” the battle at Dubosekovo or at least downplay its significance. Indeed, a few days after the events, at the request of the correspondent Krivitsky, the company commander captain Gundilovich made a list of fighters, who later honestly admitted that he could not remember or make a mistake, because the fighter group included not only his subordinates, but also volunteers from other units of the regiment. But later, already in 1942, when the participants of the battle were presented to the title of Hero of the Soviet Union, all the circumstances were established. Only the turmoil of the war years did not allow timely delivery of awards to all Panfilovites, of whom, as it turned out, 6 people survived - two were injured or shell-shocked, two passed through German captivity ...

To this day, there are disputes over whether political politician Klochkov, who threw himself with a bunch of grenades under a tank, during the battle, actually spoke the famous phrase “Russia is great, but there is nowhere to retreat behind Moscow!”. But just so, 6 soldiers stand at the memorial to the fallen in the battle - representatives of 6 nationalities, united in the face of death by their love for their great Motherland, with their backs to their capital and face to where enemy tanks attacked. Their act then, in 1941, played a huge mobilizing role. The Germans did not break through in Moscow, the battle for which was one of the decisive during the entire Great Patriotic War and the most important event of its first year, when Hitlerite "Typhoon" did not gain full force. And the memory of the courage of Panfilov remained alive after decades.