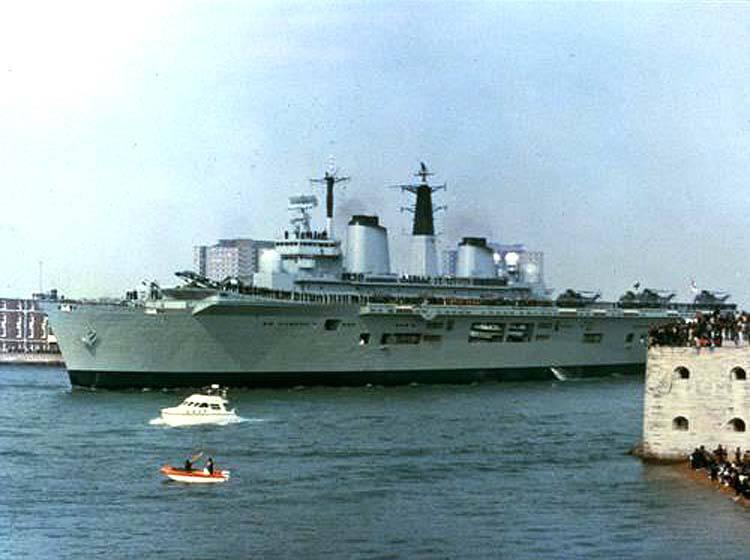 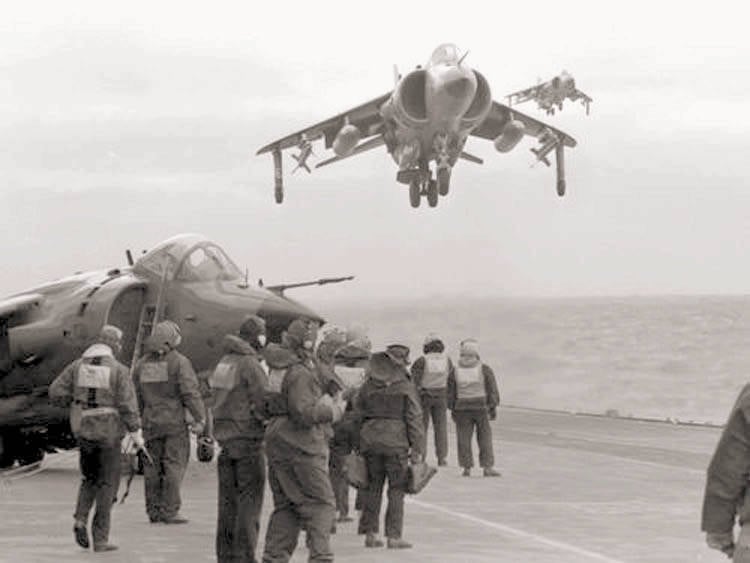 The “Sea Harrier” VTOL aircraft, from the 801-th AE, lands on the Invinsible aircraft carrier after completing a mission in the Falkland Islands

During March – June 1982, the world community closely followed the developments in the South Atlantic in the region of the Falkland Islands (Malvinas). The political crisis led to open armed clashes between Britain and Argentina.

The decisive role in the restoration of British ruling circles of colonial status over the Falkland Islands was played by the Royal Navy. According to the foreign press, the following tasks were assigned to them: the transfer of forces to the South Atlantic fleet, aviation Navy, Marine Corps and Ground Forces; the conquest of dominance at sea and air superiority and the establishment of a blockade of the islands; the implementation of the landing operation; providing support to troops during the landing and combat operations on the shore.

Noting the successes achieved by the Navy in addressing these issues, foreign military experts at the same time point to heavy losses (primarily in the ship), suffered by the UK in the battles for the Falklands, and cite the main reason for this lack of reliability of air defense of the expedition forces sent here . In their opinion, the following main factors had a negative impact on its effectiveness: the remoteness of the combat area from the UK on 8000 miles (almost 15000 km), which hampered the group’s logistical support and excluded the use of basic patrol aircraft and early warning radar as a means early detection of airborne targets and the absence of such funds on aircraft carriers; the presence of a relatively small number of carrier-based aircraft capable of solving the tasks of air defense; weak equipment of the ships anti-aircraft missile systems (ZRK) "Sea Wolf" with a high degree of response. 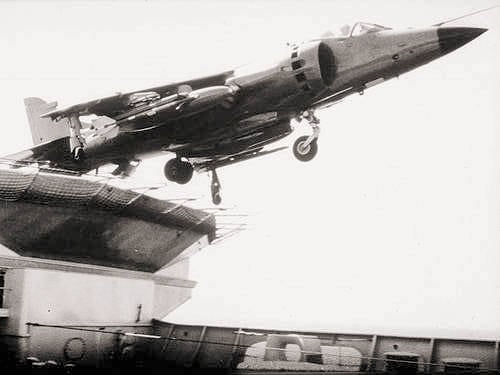 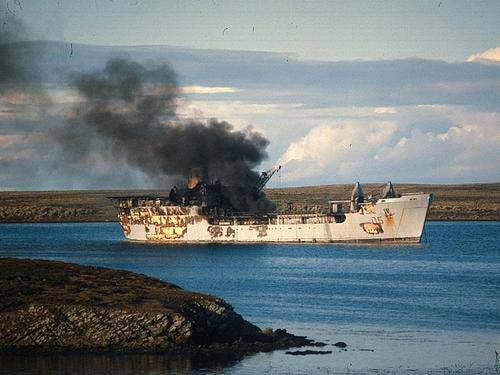 Fire on the British landing ship "Sir Galadhead" after an attack by Argentine 24 aircraft in May 1982. 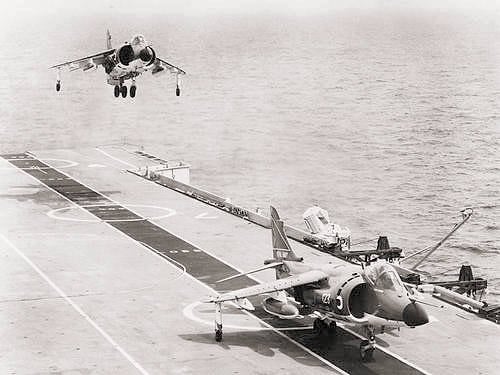 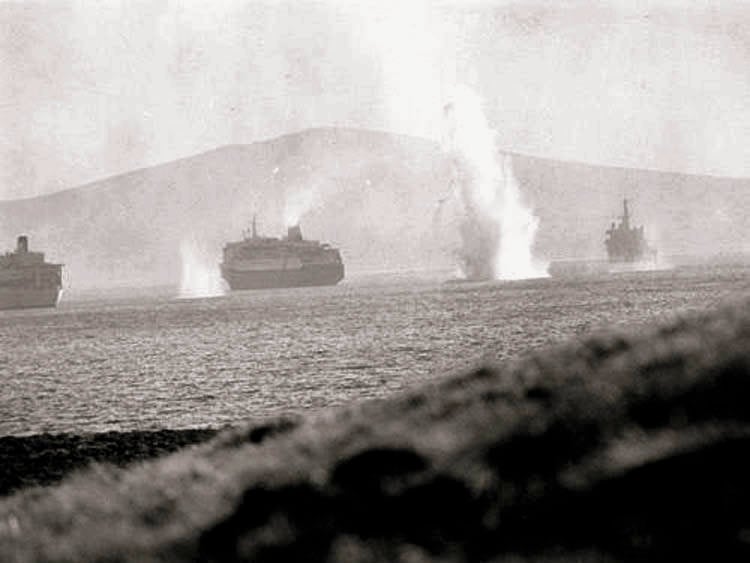 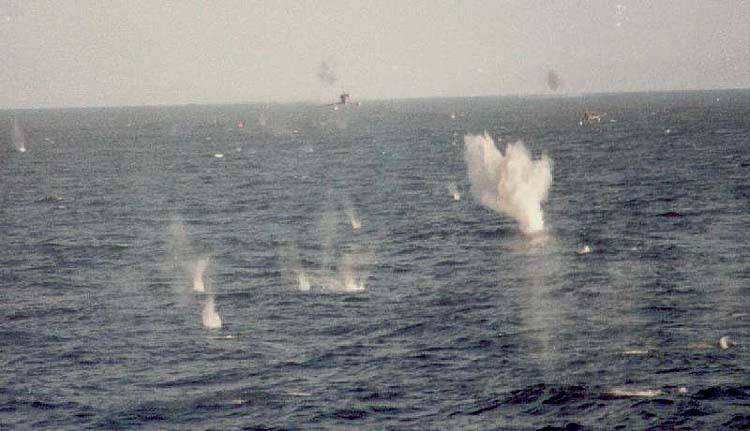 A unique photo taken from the board of the British frigate "Broadsworth" 25 in May 1982. Argentine A-4B Skyhawk aircraft approach the frigate to drop bombs on it. Bursts on the water - the fall of the shells of anti-aircraft guns defensive ship 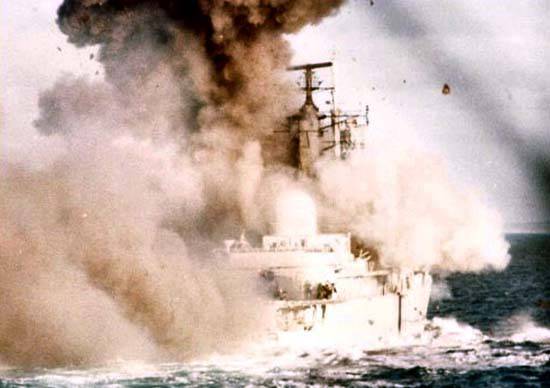 The explosion on the British frigate "Coventry", attacked by Argentine planes in a pair with FR "Broadsworth" 25 in May. After the bombs hit the ship stayed afloat 1 hour, after which it sank

Judging by the materials of the foreign press, to ensure the air defense of the expeditionary forces (ships and landing forces) in the region of the Falkland Islands, three air defense areas were created (see figure).

The organization of the air defense of the British expeditionary forces


The 1 region covered the area around the Falkland Islands, which is within the reach of the Argentine Air Force. The task of early detection of an air enemy here was solved mainly by squadrons of URO destroyers and frigates of UROs of the radar patrol. These ships were located in 120 miles (222 km) from the main forces of the ship group in threatened directions and monitored the air situation at medium altitudes within 120 miles (222 km), and at low altitudes - to 27 miles (50 km).

Air cover of the area was provided by airplanes with vertical or shortened take-off and landing of the "Sea Harrier", based on the aircraft carriers Invinsible and Hermes. Some of these machines were in the air, and the rest - on the decks in a three-minute readiness for takeoff. The planes patrolled at a distance of 140 miles (260 km) and more from the main forces within the range of the radar of patrol ships in constant readiness for an attack according to their target designations. In the case of successful overcoming by the Argentine pilots of this line, new vehicles were raised from aircraft carriers. The Sea Dart air defense system (70 km firing range) of escort ships also entered into action. 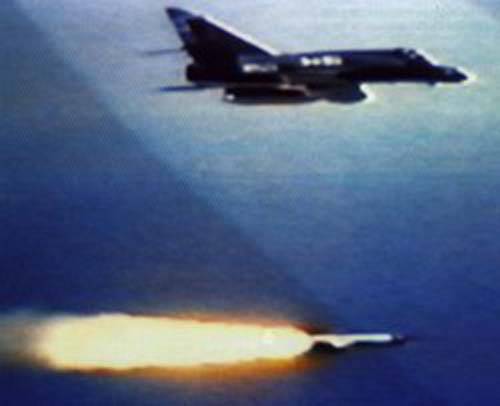 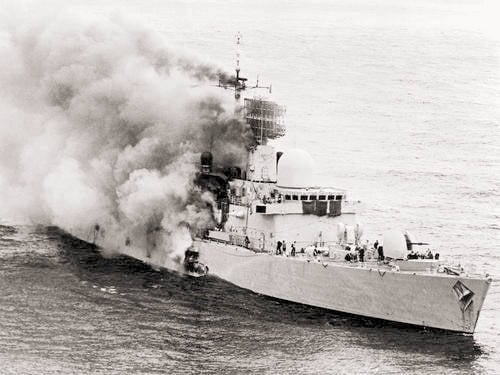 British EM URO "Sheffield" after the attack of Argentine aircraft 4 May 1982 g. After a strong fire, the ship sank 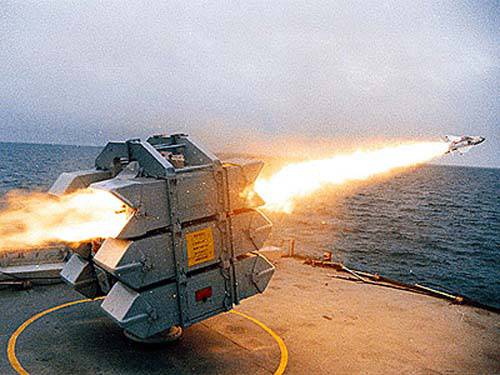 The 2 area included the space above the Falkland Islands. His defense was provided by ships patrolling around the islands or providing support to the landing forces. The main means of destroying the aircraft were the Sea Dart, Sea Cat and Sea Wolf systems (the firing range of the latter to 5 km). To counter the massive raids used shipboard anti-aircraft artillery systems. In addition, helicopters were used as directors of passive jamming or infrared traps, opposing the homing head of aviation air-to-surface missiles.

The 3 area covered the area above the northern part of the Falkland Channel and the bay of the port of San Carlos. His forces and equipment (Rapira air defense missile system with a range of up to 7 km and Bloupep, portable with a maximum interception range of 3 km) covered desanted troops from air attacks during their landing and conducting combat operations for expanding the bridgehead.

Although, according to foreign military experts, this air defense system of the expeditionary forces did not fully justify itself, they note its two main positive aspects. First, the increase in radar detection zone forced Argentine pilots to break through to targets and overcome a significant part of the route at low altitudes, which, due to high fuel consumption, limited the radius of flight of aircraft and sharply reduced their ability to explore and destroy British naval ships. Secondly, the air battles, as a rule, were of a time-limited nature, and often the Argentine pilots left for their airfields, only partially fulfilling the tasks of striking the ships and forces of the enemy assault force.

In warfare, the Sea Harrier and Harrier aircraft have proven themselves well. They had higher maneuverability than the Argentine Skyhawks, and had advantages in speed and armament. According to the latest foreign press reports, during the conflict, the 28 aircraft of the Argentine Air Force were shot down in air battles, eight with Sea Dart anti-aircraft missile systems, six with Sea Wolf and 14 with Rapier. On the effectiveness of the use of the air defense system "Rapier" in the foreign press provides such data. During the first six days of fighting in the bridgehead, the British spent 45 missiles and shot down nine aircraft, and the next two fired 23 missiles and destroyed two aircraft. On average, six missiles were spent on one downed plane.

The weak point in the organization of air defense, as noted in the foreign press, was that the ships that were in the radar patrol were themselves vulnerable to air strikes. This is confirmed by the fact that two of the four sunken destroyers and frigates were lost while they were patrolling.

A certain weakness of the air defense system was also revealed when the Argentine Air Force raided the assault forces during their landing in the area of ​​the port of San Carlos, which was covered by a group of frigates armed with Sea Dart and Sea Wolves. The crowding of British ships in the narrow Falkland Strait allowed the Argentines to make a series of successful attacks. As a result, two URO frigates were sunk (the Ardent and Antelope) and several other ships were seriously damaged. Argentine aviation lost six aircraft.

The air defense of the British ships, which carried out artillery shelling of the Port Stanley airfield, was not effective enough. The planes of the Argentine Air Force, using data from coastal radars located on the islands, attacked ships from the coast at extremely low altitudes (up to 15 m). The attack was reflected by the C-WOLF air defense system and the ship's anti-aircraft artillery. In the course of it, some ships were seriously damaged, and the destroyer URO received a through hole in the hull from an unexploded bomb. When repelling a raid, two Skyhawk aircraft were shot down and one crashed into the sea, carrying out an anti-missile maneuver.

In addition, it is emphasized that the most prepared Argentine pilots successfully overcame opposition from the air defense of ships and fighters, making flights with thoughtful maneuvering at low and extremely low altitudes. When attacking, they often used sunsets from the shore or the sun, thereby making it difficult for operators and gunners to work. As a result of such attacks, the destroyers of the Sheffield and Coventry URO patrols and the Antelope URA frigate were sunk, and several ships were damaged.

During the fighting, the Falkland Islands also revealed other serious shortcomings in the organization of the air defense of the British expeditionary forces, which are still being studied by foreign military experts. However, immediately after the end of the conflict, they pointed out a number of specific measures that, in their opinion, could contribute to a more successful solution of the air defense tasks. So, in order to cover the strike forces on aircraft carriers or escort ships, they should have had early warning systems in place - helicopters, airships, aerostats and other aircraft. The need to improve shipborne systems for detecting and destroying low-flying targets was noted. Deck airplanes performing air defense tasks should have a greater range of operations compared to the Sea Harrier, and ships, especially those separated from the main forces (for example, radar patrol ships), should have the Sea Wolf or modern artillery systems in service. systems capable of destroying anti-ship missiles.

These, briefly, are some of the features of the air defense of the British expeditionary forces during the Anglo-Argentine armed conflict in the region of the Falkland Islands (Malvinas). 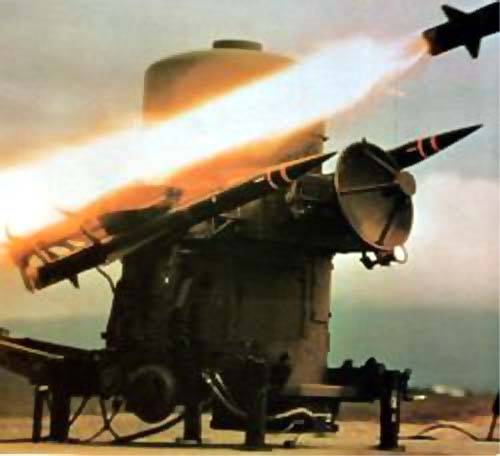 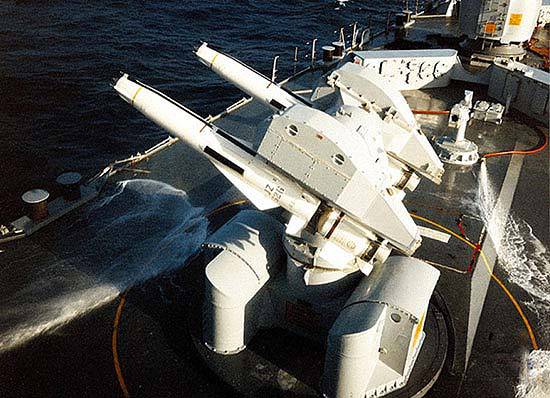 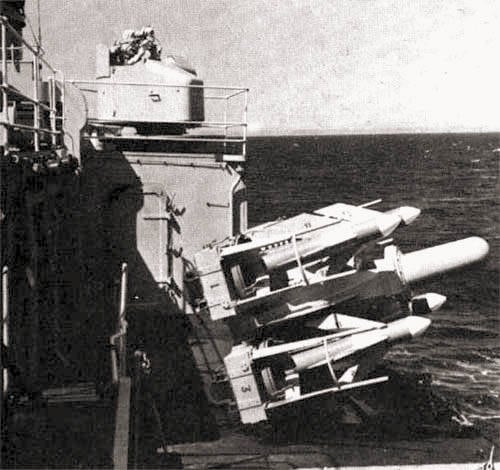 Ctrl Enter
Noticed oshЫbku Highlight text and press. Ctrl + Enter
We are
The Undiscovered Secrets of the Falklands WarFalkland or Malvina? The Anglo-Argentine War began thirty-three years ago.
13 comments
Information
Dear reader, to leave comments on the publication, you must to register.