Why is Putin-2013 compared to the late Brezhnev?

November 18 2013
155
Ministers of the government’s economic bloc continue to “delight” with their forecasts in the economic sector. The Minister of Economic Development, Alexei Ulyukayev, did not have time to announce that the growth of the Russian economy in the current year is unlikely to go beyond 1,8%, as Finance Minister Anton Siluanov presented more “fresh” data. Speaking at a plenary meeting in the Lower House of Parliament, the head of the Ministry of Finance said that the growth rate of the Russian economy over the past two quarters fell to the 1,2% mark, which makes it impossible to achieve a value of 1,8% for the year. It turns out that this year the Russian economy shows the lowest growth in recent years, if, of course, not to take into account the fall during the crisis year 2009.


The economy, of course, is growing now ... But it’s about the same as if teenagers in one class “stretched out” for half a head, and you grew up only a centimeter - it seems like nothing particularly terrible, but still something uncomfortable ... And this is with all the potentials of our "teenager" ...

Especially "uncomfortable" such indicators are perceived after understanding the information about what indicators of economic growth Russia has demonstrated since 2000:

It should be noted that the decline in growth rates is typical for many developed and developing countries. For comparison: the forecast of Chinese economic growth for 2013 year - 7,4%, India - 4,4%, Brazil - 2,5%, South Africa - 3,1%. That is, in terms of growth rates, Russia risks taking the last place among the BRICS countries.

Rejoice or stumble over what is below the level of growth of the Russian economy (or about the same level) - indicators of such economically developed countries as Germany - 0,5%, France - 0,4%, Great Britain - 1,3%, Japan - 1,8%. The economies of Italy, Portugal and Greece continue to fall.

In general, the situation is such that in terms of growth, we and the rest of the world are confidently overtaking, for example, Turkmenistan (+ 10,1%), but at the same time France and Germany are inferior to our “growth”.

What can it say? Many people associate this with the purely inept actions of the Russian authorities, who are not capable of conducting full-scale economic modernization, while remaining dependent on the “weather” in the commodity sector. According to specialists who adhere to this point of view, Russia continues to live in the conditions of a system of commodity dependence, which began to take shape at the end of the Brezhnev era. In this regard, Vladimir Putin is actively compared with Leonid Brezhnev, drawing parallels between the Brezhnev "stagnation" and the times today. This idea, which is remarkable, is expressed not only in Russia, but also abroad. 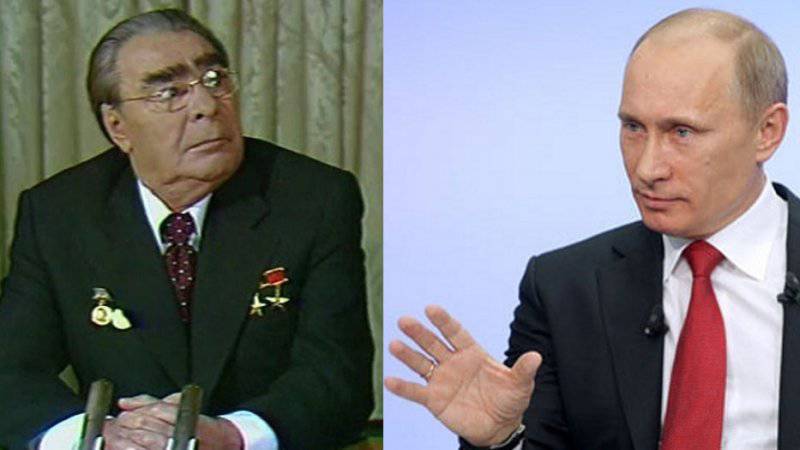 Recently, an article on analogies between Russia today and the USSR at the beginning of 80's was published in Bloomberg. This edition stated that the current generation of leaders in Russia is attacking the same commodity rake that government economists of the era of Leonid Ilyich have attacked. True, between those and the present times, as noted in "Bloomberg", there are several important differences. The first is that in 1982, the share of Soviet GDP in the global economy was 8,7%, and today this share is 3,6% (for some reason, the author does not cover the fact that USSR-1982 and Russia-2013 is still two different states, with different population figures, with different production capacities). Second, the Russian economy is part of the world economy, but the USSR economy was much more isolated, despite the active trade in hydrocarbons in the late Brezhnev era. As a result, Bloomberg concludes that the main similarity between Russia in the Putin era (present-day Putin) and the late Brezhnev USSR is that both then and now the main emphasis was placed on the conservation of the successes that have been achieved in recent years. This conservation was the cause of the collapse of the USSR, as if hinting at something, writes Bloomberg journalist Stepan Kravchenko ...

Some theses, of course, can be challenged, but it’s worthwhile to single out from this article quite reasonable words that the current economy of the Russian Federation has become part of the global system. And not even so much global as pro-Western. Huge money stocks of funds are held in dollars (45%), euros (45%) and pounds sterling (10%). The main financial laws are copied from the financial laws of the United States and Western Europe, and with original internal amendments (for example, the 20 article of the anti-corruption convention - the article on the illegal enrichment of officials has not yet been ratified). The outflow of capital (mostly to the West) no one seeks to put a reliable barrier. Talk about raising the status of the Russian ruble has been going on for many years, but in fact, the ruble is only losing its position (globally).

If we again turn to the statistics of growth rates, then the pro-Western Russian economy becomes even more obvious. So, the growth rates of the economies of Russia, Germany, USA, France lie in the range from 0,4% to 2%. Ukraine, which wished to integrate with the EU, finds itself in the same plane. Here is Georgia, which has a pro-Western economic course, and Estonia, which is in the eurozone with 2011. Why was Belarus here, and not Kazakhstan? The fact is that the Belarusian economy is primarily focused on the Russian one, and ours, in turn, is sewn to the western one. The economy of Kazakhstan is oriented not only towards Russia, but also, for example, towards China (the annual trade turnover of the PRC and Kazakhstan) is about 27 billion dollars.

Vladimir Putin’s recent visits to Vietnam and South Korea show the desire of the Russian leadership (is there a whole leadership?) To somewhat reorient the economic model. In this, at the late Brezhnev era and the era of the current Putin, there are significant differences - then there were no special attempts to reorient somewhere. But one thing is attempts, others are results, after all, the linking of the Russian economy to the western one is so strong that the West can not prevent such a reorientation, and it doesn’t even need to make any special effort for this (the West) —the Russian reserves are invested in the European and the American economy. But without reorientation and diversification, the Russian financial system risks remaining on indicators close to zero, even with the level of potential that Russia has. And zero indicators, stagnation and preservation of previous successes do not lead to good. Examples are available ...

Ctrl Enter
Noticed oshЫbku Highlight text and press. Ctrl + Enter
We are
Situational analysis of the death of the MH17 flight (Malaysian Boeing 777), made on the basis of engineering analysis from 15.08.2014Results of the week. “In our cooperative, the board is always agreed”
155 comments
Information
Dear reader, to leave comments on the publication, you must to register.