Monogorozhane across the country, move ...

November 18 2013
136
Last week, the Russian government almost at full strength decided to hold a retreat. The main question is: “what do we do with mono-towns?” Why was this particular question that worried government officials? The fact is that many Russian single-industry towns, according to the estimates of the Ministry of Labor, provide a significant, let's say, contribution to the overall unemployment rate. In total, 342 has one-company towns in Russia (cities with a company that employs a large number of residents of the locality), in 60% (more than 140 cities) of which the unemployment rate exceeds both the average in the region and the national average. In 50 cities of 342, the percentage of officially registered unemployed exceeded 10%, which is twice as high as the national average.


To influence the situation, the ministers decided to hold a retreat in one of these cities - Tutaev (Yaroslavl Region) - the city of the Golden Ring of Russia. The town-forming enterprise here is the Tutaev Motor Plant, which employs about 2 thousands of city residents (the total population of Tutaev is 40,5 thousand people). And the number of factory workers is falling every year (in 1998, more than 12 thousand people worked at TMZ, which is due to the lack of permanent large-scale orders. Today TMZ, like many other Russian manufactures, is forced to switch to part-time work. At TMZ, the working day is only four hours. That is, there is hidden unemployment, when people seem to be employed in production, but in fact remain unclaimed. According to some sources, Russian Technologies is a major shareholder of the Tutaev Motor Plant, in which Anatoly Serdyukov has recently been in charge. In this regard: is not the appointment of Mr. Serdyukov to a high post at Rostec an attempt to "finally solve the problem of monotowns" in Russia? .. 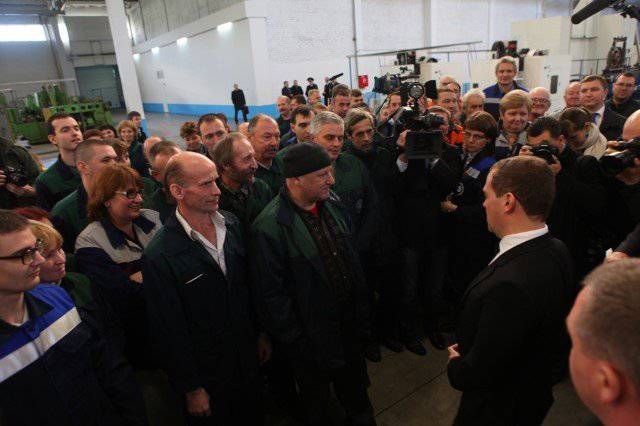 The fact that the decision on single-industry towns can be “final” has become clear from the nature of the government meeting itself. It turned out that in order to “solve” the problem of one-company towns, one must get rid of the one-company towns themselves. Well, it’s in the style “There is a monocity - there are problems, there is no monocity - there are no problems ...” Government officials made an offer to the unoccupied population of such settlements as Tutaev, for example, to resettle, for example, to the Far East ... Like, if there is no work in the monocity, it must be sought outside its territory.

Such a proposal lies in the concept that was recently voiced by Prime Minister Dmitry Medvedev. The prime minister noted that Russians in the conditions of the current economy need to be ready not only to change jobs, but also to change their place of residence. The logic is as follows: there is no work here - go there, lost a job there - go to another place. That is, people who have lost their jobs should become a kind of nomadic people who will travel around the country in search of jobs. It seems to be all right - you need to think about how to feed the family, but what will these nomadic tendencies lead to? They can only lead to the fact that there will be no single-company towns or industrial enterprises demanded by them. And the number of original "Detroit" in the country, obviously, will begin to grow. There were “dead” villages, and “dead” cities would also appear.

But people are not so easy to budge. Many people in the city or its environs - housing, relatives, friends, cellars and pickles, fish places, in the end ... It's not so easy to give up all this and rush in search of "labor adventures" away from the collapsing city-forming enterprise.

As it turned out, the government thought about this, and decided to push people to the move. How? Everybody who wants to move from a single-industry town to a “satisfying” place for 200 thousand rubles per person is going to. If this person takes the whole family with him at once, then the payments are decided to increase to 300 thousand. Well, if a man with his family travels to the Far East (and now, judging by Dmitry Rogozin, to call our East Far Far Off is reprehensible, but it must be called none other than the “Pacific zone” or the “Pacific region”), payments can grow to 800 thousand. The state is going to allocate about 18 billion rubles for these needs (of which 20% is the funds of the regions - obviously the host regions). However, if you live in a mono-town and have already decided, at the call of the government, to move to other cities and weigh in search of work, at the same time hoping to receive dubbed funds, then you will have to somewhat calm down the fervor. The fact is that the government decided to help only those who are going to leave in search of a better life from single-industry cities, whose unemployment rate exceeds the national average, that is, this level should be above 5,4%.

This situation gives an excellent chance for local officials to “solve” the problem of unemployment in two accounts, and even with the issuance of funds to those who are going to leave the city in search of work. It’s enough in the reports “a little” to correct the unemployment figure in the direction of its reduction - and the matter is done - the city turns not only into a successful one, but already into the average ... This is to make the population of the city sit on the fifth point exactly. But at the same time, the authorities from other single-industry towns may have the opportunity to “draw in” the unemployment rate to values ​​higher than the national average. To finish the order - once, to receive money from the state - two, to hand over a report that so many-so-so-so-settled - three, to replenish their own financial situation - four, to “configure” in the rank of a witness (if this information comes up) . No, of course, we will not assume that all municipal governments of single-industry towns will go to such frauds with state funds. But there are those who will definitely go. Well, this, based on the latest trends ...

By the way, just something 2-3 a year ago, the Russian authorities declared support for single-industry towns. The then Prime Minister Vladimir Putin actively visited such cities, called in a specific manner to representatives of big business to negotiate with each other, so that city-forming enterprises would go out to the necessary production capacity and pace. It turns out that that work is no longer counted, that funds were allocated in vain to support the city-forming enterprises? Now new trends, know-how - relocation? ..

It can be assumed that many people will still go looking for work in the same Far East, having received the promised funds from the state. You can even assume that they will find a job and get a place to live. But then it turns out that the inhabitants of the single-industry towns of the Far East find themselves in some awkward situation. They certainly don’t get thousands for 800 - they also live in the Far East ... That is, a strange situation turns out: a person who has come to look for a workplace in the Far East from other FDs is going to give the state money, and to a person who has long lived in this region , and, perhaps, it has no less problems with work - not to give, or to give, but less ... Following such governmental logic, in order to get state support, the Far Eastern people urgently need to leave their region and then enter it back ...

Ctrl Enter
Noticed oshЫbku Highlight text and press. Ctrl + Enter
We are
Situational analysis of the death of the MH17 flight (Malaysian Boeing 777), made on the basis of engineering analysis from 15.08.2014What part of Russia in the government is considered unpromising?
136 comments
Information
Dear reader, to leave comments on the publication, you must to register.