Nepalese Gurkha volunteers in the service of the English Crown 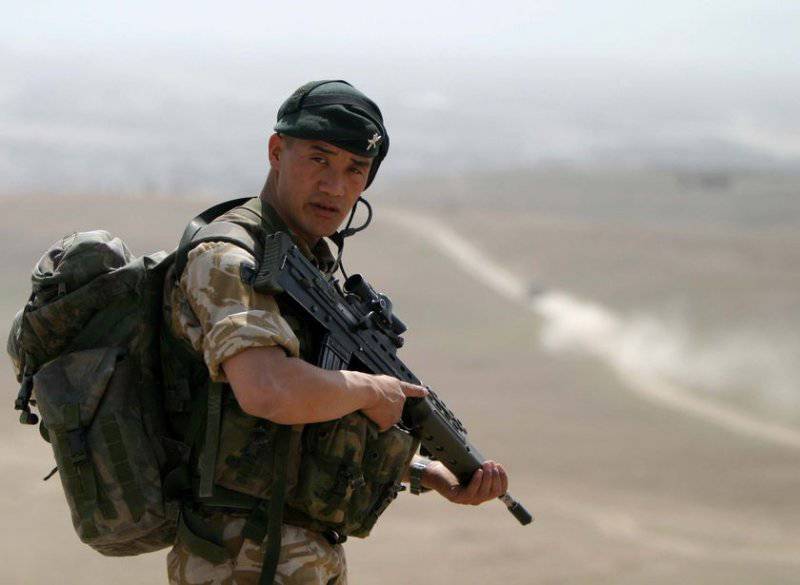 In South Asia, the state of Nepal is located in the Himalayas. To the north of it is Tibet (autonomy belonging to China), and in the south and west of it is India. Most of the territory of Nepal is occupied by the Himalayan mountain system. Among the 28 million inhabitants of the country are about a hundred nationalities and castes.

One of the peoples inhabiting Nepal is the Gurkha. The name of the Gurkha people was the name of the Hindu warrior - Gur Gorakhnath. The Gurkha ancestors were immigrants from North India - Rajputs and Brahmins. By the way, the Brahmin caste is fearless warriors and priests. During the British colonial wars, the British attributed the Gurkas to the "warlike races." It was already noted that Gurkha warriors are distinguished by their aggressiveness in battles, tremendous courage, loyalty, physical strength, self-sufficiency and incredible endurance.

In 1769, the Gurkha dynasty came to power in Nepal. During the British-Gurkh war (1814-1816), the Gurkha put up fierce resistance to the invaders. As a result of the military confrontation, Nepal had to make a number of territorial concessions in favor of the British East India Company, which, in response, pledged to pay the country 200 thousand rupees annually. It was Gurkham Nepal that owes the fact that the country did not become a protectorate of Britain. The abilities of the warlike people shook the British, and from 1815 onwards, a voluntary recruitment of Gurkhas to the ranks of the British colonial army began.

Even after the withdrawal of British troops from India, the Gurkha remained to serve in the armies of both India and Great Britain. According to the laws of both countries, Gurkha are not mercenaries - they are fully integrated into the military systems of these countries. The battle cry of the Gurkhas are the words "Jai Mahakali, Ayo Gorkhali" and translate as "Glory to the Great Kali, go Gurkha!"


The Gurkha took part in eradicating the anti-colonial uprisings in India, raised by Sikhs and Besai, as well as suppressing unrest in Afghanistan in the 1848 year. Since 1857, Gurkha warriors have served in Burma, the former British, and then the Japanese colony, as well as on the borders of India and Afghanistan. During the Russian-Turkish war (1877-1878) they were on the side of the Turkish troops. Gurkha also served in Malta, in China.

Few people know that the Gurkha took part in the battles of the First World War on the side of Great Britain, defending the interests of their overlord in France and the Middle East. Between the two great wars, they took part in the Anglo-Afghan military conflict in 1919 and in a number of other military companies. 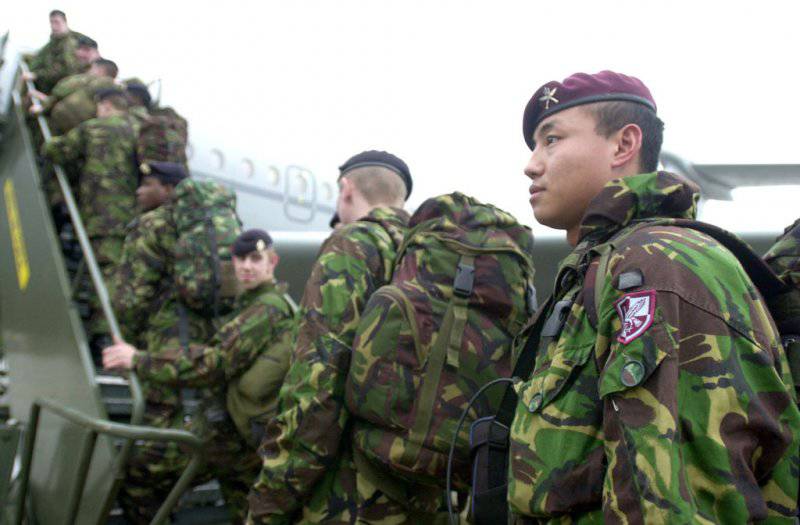 In difficult times for Great Britain, during the Second World War, the Gurkha fought in Italy, Africa and Southeast Asia. For this, the monarch of Nepal allowed the British to form battalions of the Gurkha 55, in which about 250 thousands of Nepalese soldiers served. There was a case when the Gurkhas showed great courage in confrontation with the Luftwaffe paratroopers in the battle of Monte Cassino (Italy).

During the Falkland Conflict (1982), the Gurkha showed themselves as brave warriors and reaffirmed their reputation as invincible soldiers. It was a battalion of Gurkha-shooters, landed in the bay of San Carlos, contributed to the breakthrough of the Argentine defense of Port Stanley. 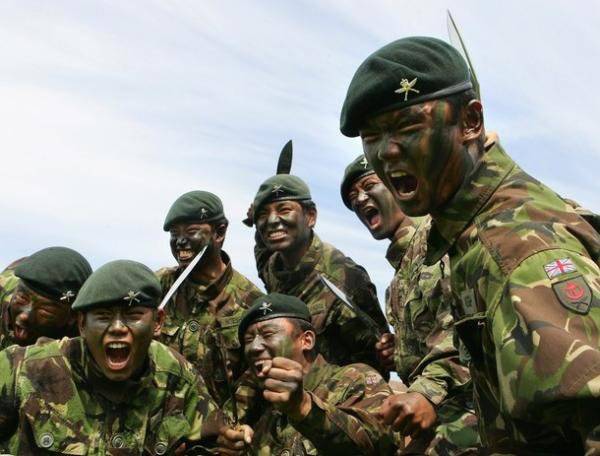 Gurkha also participated in military conflicts in the Persian Gulf, in Afghanistan, in Iraq, in NATO operations in Kosovo, and also were part of the peacekeeping forces in East Timor and Bosnia.

The great confidence of the English crown to the gurkhas was also expressed in the fact that it was the Nepalese who carried out the guard of Prince Harry during his service in Afghanistan.

The British successfully use the fact that Gurkha warriors are distinguished by their courage, the strictest discipline and loyalty to the oath. Therefore, today, around 3,5, thousands of Gurkha soldiers and officers in the same brigade are serving the English crown.

Most Gurkha units are quartered in Hampshire County in the town of Church Crookham. The minimum service life for which the contract is concluded is 5 years. New recruits are recruited in the highlands of Nepal. The competition is huge: there are about 200 thousands of young Gurkhas claiming 28 seats. The selection procedure is striking in its cruelty: applicants for enrollment in the British army need to run uphill for forty minutes with a load of 20 kg. But, even having passed the preliminary selection, recruits pass nine months of training at one of the Hong Kong bases before being sent to the active part. Gurkha units have very few British military personnel in their ranks. According to the established tradition, applicants for officer and sergeant posts are promoted from the Gurkha ranks. 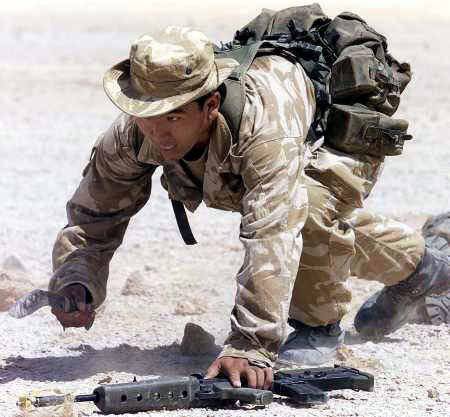 As a rule, infantry light infantry battalions that do not have armored vehicles form Gurkha groups. Also, the 2 squadron of military engineers, three communications squadrons, a transport regiment and even a military band are part of the units of the Gurkha fighters. All soldiers and officers of combat units have good parachute training. Gurkha must have traditional equipment weapon Nepalese warriors - fighting knives kukri. They use their favorite weapon in hand-to-hand combat with the enemy. 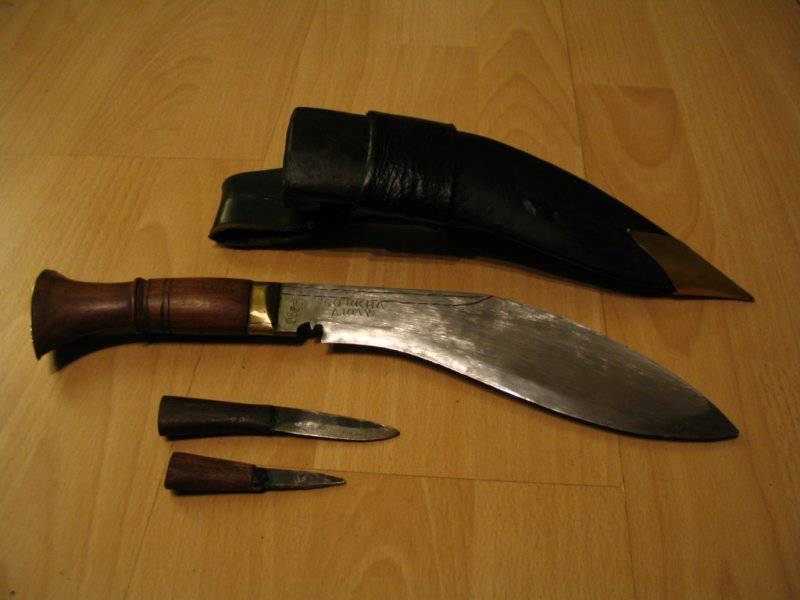 Legislatively, Gurkha has a lifespan of from 15 to 30 years - only in this case, the Gurkha warrior is entitled to receive a pension from the British government. As a rule, after completing their service in the army, the Gurkha return to their homeland - in Nepal. Since 2006, the English authorities have granted British citizenship to Gurkha. Such "lucky" today there are about 140 thousands of people. Recently, former Gurkha military personnel have been fighting for the appointment of the same level of pensions as British retirees - citizens of the country. Today it is only one third of the pension of English retirees.

It would be a mistake in this situation to accuse Gurkha of self-interest and label them mercenaries fighting for interests alien to them. It would be more correct to consider them warriors who faithfully fulfill their duty to the British crown. It is fair to say that Nepal, by giving its citizens the opportunity to serve in the army of another state, derives quite a few benefits from this - a mountainous state receives thousands of highly paid (by Nepali standards) "working" jobs. Britain also gets hardy, brave warriors, loyal to the British authorities and always ready for battle. 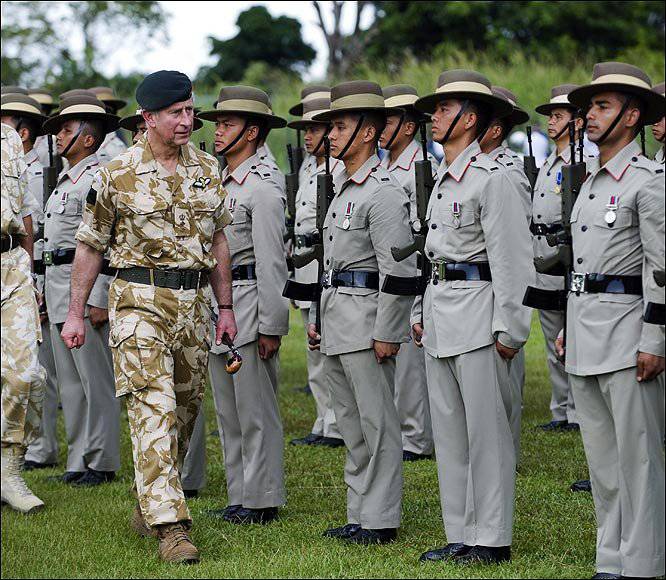 Perhaps the struggle of retired Gurkhas for the right to receive a decent pension is associated with a far from rosy outlook for the future of the existence of elite combat Gurkhan units in the British army.

For twenty years, the Gurkha veterans have been fighting for a decent retirement of Nepalese fighters who have retired: from hunger strikes to appeals to the British authorities. One Gurkha veteran says: “We don’t know what else can be done to attract attention. Thousands died without waiting for justice. Nobody cares about us in the Ministry of Defense. So I’ll either enforce my rights or die. ”

Many British citizens believe that the state is indebted to Gurkha, because “... they fought shoulder to shoulder with the British troops for almost 200 years, we have moral obligations, honor debt. Gurkha gave their lives so that we can live. "

In the meantime, the British military department plans to reduce the units of the Nepalese soldiers by one and a half times, citing the lack of funds in the treasury.

Time will tell how much the desire to save is equivalent to the loss of an elite combat unit by the British army.

Ctrl Enter
Noticed oshЫbku Highlight text and press. Ctrl + Enter
We are
Indian Armed ForcesKshatriya caste. The growing power of the Indian Navy
14 comments
Information
Dear reader, to leave comments on the publication, you must to register.