Artillerymen, calling the Motherland of us! 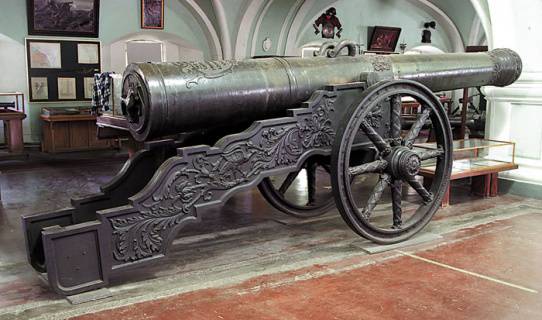 November 19 The Russian Armed Forces celebrate the 69 anniversary of the establishment of the Day of the Rocket Forces and Artillery.


Looking back at the past of the military stories Russia, it should be noted that the emergence of artillery is closely connected with the appearance of gunpowder, firearms weapons and transformation in the course of historical development into a powerful arm of the army (XVI – XVII century), figuratively called after the defeat of the Finnish troops on the Karelian Isthmus in 1939 – 1940, the “god of war”.

At first, the artillery had a primitive, inactive, weakly powerful materiel. For a long time, the guns remained smooth-bore, loaded from the barrel. In the future, depending on the achievements of science, the economic capabilities of the state in developing the most important kind of defense for the Fatherland, the issues of its rearmament with rifled long-range systems, providing ammunition with increased power of action at the target, the creation of modern artillery weapons were comprehensively addressed.

Artillery became one of the decisive means of defeating the enemy. The victorious volleys of Russian gunners rattled in the Patriotic War of 1812, in the Russian-Turkish war of 1877 – 1878. Artillery played an important role in the Russo-Japanese war of 1904 – 1905 and in the First World War of 1914 – 1918. And during the Great Patriotic War from 1941 to 1945, the year without artillery was not thought of preparing and carrying out all the most important operations to defeat the most powerful in Europe and professionally trained army of Nazi Germany.

IT WAS UNDER STALINGRAD

On the eve of World War II, only two types of the Armed Forces - the Navy and the Air Force - had their professional holidays. However, the artillery, having shown high fighting qualities in the Soviet-Finnish war, in the fierce battles and battles of the Great Patriotic War did not officially have its holiday. And only on October 21 of 1944, the Decree of the Presidium of the Supreme Soviet of the USSR was held to establish the annual holiday of the Red Army Day of the Red Army on November 19, in honor of the great role of artillery in the counter-offensive that began on that day in 1942 near Stalingrad.

On the eve of this long-awaited day, Thursday 19 of November 1942, the troops of the South-Western, Don and Stalingrad fronts took the starting position for the offensive. The number of ground and anti-aircraft artillery in the Stalingrad area exceeded 17 000 guns, mortars and rocket artillery combat vehicles. For the first time during the war, the artillery density reached the 100 – 110 guns per 1 km. The calculations of thousands of artillery guns froze in firing positions in anticipation of the command “Pull the cords!”

At field airfields hundreds of planes were made for take-off. However, the weather, which changed sharply before dawn on November 19, made significant adjustments to the organization of artillery use and aviation. Dense fog, which soon began to snow heavily with a solid gray veil, enveloped the entire area of ​​the upcoming military operations. It turned out to be impossible to raise aircraft into the air, since visibility did not exceed 200 m. The main burden of a fire attack on the enemy was now assigned to artillery. The commander of the Southwestern Front, Lieutenant General Nikolai Vatutin, knowing about the instructions of the Supreme Commander-in-Chief - not to launch an offensive without aviation, turned to the commander of the artillery: “What will we do, artilleryman?” Artillery Major General Matveev firmly replied: “For the artillery of the front, I’m calm. She will not fail. " And then the front commander made a crucial decision: “Start!”

Part of the tasks of aviation had to be shifted to artillery. In 7.30, the thunder of thousands of guns broke the predawn silence, telling the world about the beginning of a grand offensive on the Soviet-German front. The buzz from an unprecedented hitherto cannonade did not stop 80 minutes. The enemy was stunned by the impact of Soviet artillery in their positions.

Further events are well known. In November 1942, near Stalingrad, it was practically proved that artillery was capable of not only preparing and supporting infantry and Tanks in breaking the enemy’s defense, but also to accompany the troops with their powerful fire to the entire depth of their tasks in battle and operation. For the first time in full, for all three periods of the enemy’s defeat by artillery fire (artillery preparation, artillery support and artillery support in depth), an artillery attack was carried out in accordance with the requirements of the directive letter of the Supreme Command Headquarters No. 03 of January 10, 1942.

The establishment of the Day of Artillery Merit Celebrations during the Great Patriotic War had the most decisive impact not only on raising the morale of all the artillerymen of the active army, but also strengthened their faith in the Great Victory, positively affecting the successes of the labor teams of military factories that carried out the orders of the Main Artillery Directorate. Additional capacity was put into operation at the expense of available mobilization reserves.

Notable success was achieved by many industrial enterprises. In the second half of 1941, the teams of evacuated enterprises from Moscow and Podolsk were housed in the buildings of the old Sverdlovsk plants named after Vojvodina and Metalist. Together they formed a tank factory number 37 (later received a new cipher number 50). And in October, 1942, the design office for the design of self-propelled artillery was created here, in Sverdlovsk, at the Ural Heavy Machinery Plant. In 1964, this KB was transferred to plant number 50. The joint venture is known today as the Ural Transport Engineering Plant. From 1942 to the present day, in Sverdlovsk (Yekaterinburg), about 40 military equipment products were developed and modernized, a significant proportion of which occurred during the war years. Powerful self-propelled units based on the T-34 tank went to the army from the Urals: SU-85, SU-122 and then SU-100 - the best self-propelled gun of World War II in its category.

By the decision of the GKO from 20 in October 1942, the artillery production and design bureau of the Ural Heavy Machine Building Plant operating from 1932 were allocated to an independent plant No. 9 (modern JSC “Plant No. 9”).

At that time, the design bureau of the plant was headed by Fyodor Petrov. The enterprise was entrusted with the task of equipping the Ground Forces with barreled artillery equipment. During the war years, the design bureau developed eight artillery systems, and the plant delivered a large number of towed 122-mm howitzers of the X-NUMX model of the year M-1938 and 30-mm of the X-NUMX model of the D-152 model, which are still in service with the armies of some countries. . The self-propelled guns SU-1943, SU-1, SU-85, ISU-100, tanks T-122, ИС-152, ИС-34, ИС-1 were also armed with the guns of the plant.

A major center of artillery thought of the USSR was the design office of the Gorky Machine Building Plant. This status did not change even after the departure of a large group of leading employees led by Vasily Grabin to the Central Artillery Design Bureau again formed in the autumn of 1942. It was Gorky's designers who were able to produce the 85-mm ZIS-S-53 gun designed for TsAKB for the T-34-85 tank. The main specialization of the Gorky design bureau became later developments and studies aimed at increasing the firepower of large caliber artillery.

It is characteristic that, in recognition of our allies and our enemies, Soviet artillery was one of the best in its characteristics. For example, in the monograph “Soviet Army” published in England after the war, special attention is paid to the high combat qualities of our artillery supplied by industry to the front, while also stating that the rapid and decisive reorganization of 1942 saved the Soviet army from destruction and destruction. prepared the way for future success.

Appealing to historical experience is always useful not only from a cognitive, but also from a practical point of view. This is especially important in modern conditions, when Russia is returning to the international arena as a great power, which it was in the recent past. We have no right for future generations to lose the experience of the development of rocket troops and artillery.

In those years, despite the economic difficulties of the country, anti-tank, self-propelled guns, recoilless guns, new types of guns and mortars, rocket artillery combat vehicles, anti-aircraft systems, etc. were adopted by the artillery of the armed forces. And in solving these tasks, the dominant role belonged primarily to the enterprises that are currently part of Uralvagonzavod Research and Production Corporation OJSC.

Recently, the specialists of the enterprise have been carrying out intensive work on the modernization of self-propelled artillery guns. New features of the upgraded howitzer 2C19М2 were demonstrated in September 2013 at the exhibition of weapons, military equipment and ammunition in Nizhny Tagil.

The artillery systems created by the plant, except for Russia and the CIS countries, are in service with the armies of more than 60 countries in Europe, Asia, Africa and South America. In some countries, they are manufactured under license agreements.

In the Petrel Research Institute, in the post-war years, work was carried out using ship, field, tank and anti-tank artillery, mortar weapons and artillery and technical support equipment. Thanks to its own production and testing base, the Central Research Institute carried out a full cycle of weapons development, including the production of experimental and prototypes, their design at the stands and the test site. Promising self-propelled artillery guns are also being designed here, other projects are being carried out as part of the state defense order.

For the development of artillery armaments, more than 110 institute workers were awarded orders and medals, 14 was awarded the title of laureate of the State Prize and the Prize of the Government of the Russian Federation in the field of science and technology.

Today, these enterprises with dignity and honor throughout their history, the heroic work of generations, the richest production traditions look to the future with confidence and are moving towards new successes in the field of not only the modernization of artillery systems, but also the creation of completely new, more meet the requirements of modern views on the conduct of the armed struggle.

Ctrl Enter
Noticed oshЫbku Highlight text and press. Ctrl + Enter
We are
Artillery of the Korean People’s Army. Part of 2. Self-propelled gunsSoviet post-war anti-tank artillery
17 comments
Information
Dear reader, to leave comments on the publication, you must to register.