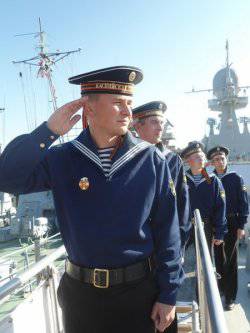 Current academic year for the Caspian flotilla was probably the most fruitful of her entire 291-year-old history in terms of replenishment of the ship composition with new combat units. Three of them arrived at the Caspian in the summer period: they were the small rocket ships Grad Sviyazhsk, Uglich and the small artillery ship Makhachkala. Recall that the rocket ship "Dagestan" and the small artillery ship "Volgodonsk" were accepted into the KF exactly a year ago. The rapid updating of the ship’s personnel influences the planning and organization of combat training, told the Red Star by the commander of the Caspian Flotilla, Vice Admiral Sergei ALEKMINSKY. 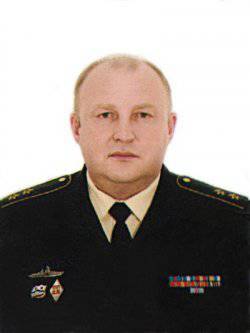 - Comrade Commander! On behalf of the Red Star team, let me congratulate you on the anniversary of the formation of the flotilla!

- So, 2013 school year is over, preliminary results have been summed up. What were the results of the flotilla's anniversary?

- The plan for the preparation of military command, forces and troops of the Caspian Flotilla has been fully implemented. When conducting operational and combat training activities in the 2013 school year, its own features and trends emerged. I would single out among the main trends such as an increase in the number of planned combat training activities, the successful implementation of combat exercises, and an increase in the number of forces and means involved in exercises and exercises. To this should be attributed the maximum completeness of the personnel enrollment, the increase in the length of marches performed by the units during combat training, the combination of operational and combat training measures with testing of new types of weapons and military equipment.

- What specific combat training activities would you highlight? What military units, ships are recognized as the best for the year?

- I cannot list all the significant events, because there were a lot of them. Our actions were aimed at achieving and maintaining the level of combat readiness of the Caspian Flotilla, which would ensure the guaranteed fulfillment of tasks to protect national interests and ensure the military security of the Russian Federation from the sea direction in the Caspian operational zone. I will dwell only on the practical side, on the performance of training tasks at sea, in training grounds, combat exercises with the use of practical weapons. 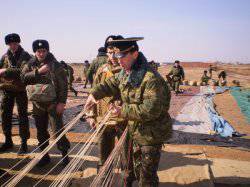 The fusion of ships in 2013 for the purpose of carrying out combat training activities averaged 57 days, while the normative 25 – 30 days. And this is without taking into account the output of the ships to perform the tasks of combat service, combat duty.

The boats in the school year performed combat exercises on 12 percent more than planned. At the same time, there were no cases of failure to carry out combat exercises or weapons accidents caused by personnel.

The Marines repeatedly marched in units and units over long distances with combat missions. The ability to act as part of a grouping of various types of the Armed Forces, military branches and forces was confirmed during the command and staff exercises in September 2013. At this KShU grouping of forces and troops of the flotilla successfully solved various problems as part of an interspecific grouping in our operational area. The most significant element was the joint action to destroy the armed formation of a conditional enemy. Despite difficult hydrometeorological conditions - sea waves reached 4–5 points, wind speed - 30 meters per second, naval forces and coastal flotilla troops together with aviation The 4th Command of the Air Force and Air Defense and the 185th Center for Combat Training and Combat Use of the Air Force destroyed a conditional enemy. 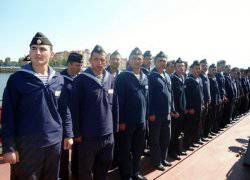 During the September exercise, the marines made a march more than 700 kilometers in length, completed all the tasks assigned to it, and returned to the place of permanent deployment without any emergency situations. Colonel-General Galkin, commander of the Southern Military District troops, assessed the group’s actions as “good” in the dynamics of the exercise.

The brigade of surface ships, commanded by Captain 1 of rank Valery Smirnov, was recognized as the best compound for the year, while the division of surface ships of this brigade under the command of captain 2 Rank Andrei Gunkin was declared the best ship division. Indisputable leadership among the ships is behind the flagship of the flotilla with the rocket ship Tatarstan. Among the units of the coastal troops, a separate battalion of marines commanded by Lieutenant Colonel Oleg Kovalev became the best in combat and mobilization training.

- Comrade Commander, this year the manning of the flotilla with contract servicemen has significantly increased ...

- As you remember, we had several attempts to switch to contract service. Some believe that the transition to this method of recruitment almost automatically solves all questions both on combat readiness and on military discipline. I am convinced that it is not. Ahead of us is hard work to create a new type of soldier - a professional warrior.

But I am sure that contract servicemen are needed where there is a complicated technique, where especially responsible tasks are being solved. First of all, it is a ship composition, parts of the marines ... 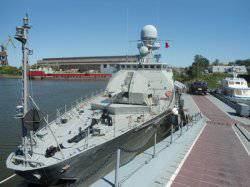 I will give an illustrative example. In accordance with the training plan for communications in the Armed Forces, with communications contractors, about 500 communications workouts were carried out, of which only 20 percent was rated “good”, all the rest were excellent. The minimum contractual life for these military personnel is 4. Based on the foregoing, we can conclude: it takes at least three years to prepare a reliable specialist.

- How to solve social problems? What is being done to provide officers and contract servicemen with official housing, to improve the living conditions of conscripts?

- Comprehensive security of military personnel is one of the most important duties of the flotilla command. Despite the fact that many issues have already been resolved, the main problem is still the provision of service housing for servicemen undergoing military service under the contract. Another unresolved problem, especially concerning those serving in the Republic of Dagestan, is the placement of children of military personnel in preschool institutions. We have developed proposals for solving these problems, I hope for a positive outcome soon. 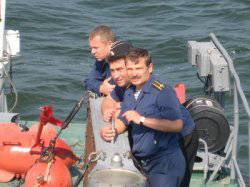 In terms of improving the living conditions of servicemen, I can inform you that in this direction we are not lagging behind the advanced units. In the units of the Caspian Flotilla, the equipment of the barracks, dormitories for the living of the personnel with shower cabins was completed, meals with elements of a buffet were organized in sailor's canteens. To maintain order in the premises, we use vacuum cleaners with the function of wet cleaning, we complete the installation of automatic washing machines and tea room equipment.

- Sergey Gavrilovich, every ship is named in the flotilla. In this regard: how is the military-patronage work organized, what do military personnel do during their free time, how is their leisure time organized?

- Military-patronage relations with subjects of the Russian Federation, cities, enterprises and organizations are being developed and strengthened. I consider the patronage of the administrations of the cities of Budennovsk, Volgograd, Astrakhan, Volgodonsk, and Stupino over nominal ships of the flotilla to be striking examples of many years of fruitful cooperation. At the moment, it is planned to sign an agreement on patronage relations between the administration of Makhachkala and the crew of the small artillery ship of the same name of the 21630 "Makhachkala" project. 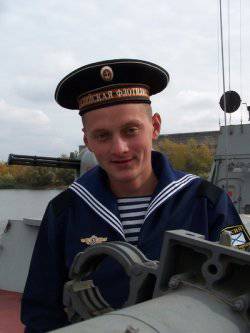 The main objective of the direction we have designated is the military-patriotic education of the youth. Dozens of draftees serve in the Caspian flotilla, which, according to the sponsorship agreements, are sent by the military commissariats of the regions and cities of Russia to the sponsored ships. Cadets of sponsored institutions annually undergo an exploratory practice on ships and in parts of the flotilla.

We hold joint concerts of amateur performances, days of a draftee with the participation of parents of servicemen and young people, we organize rituals of bringing a young man to the military oath inviting relatives of recruits, representatives of the authorities, the public.

I think that the conditions for the leisure of the servicemen in the Caspian flotilla are excellent. The house of officers of the Caspian Flotilla is one of the best in the district. It works around the clock. Each soldier or member of his family can find there classes in interest. Conducted in this center of culture and various cultural and leisure activities.

In 2013, for the first time, a competition was held among female military personnel and employees of the “Pearl of the Caspian Sea - 2013”. This competition had a resonance both among the servicemen of the Caspian Flotilla and among the civilian population of the Astrakhan Region and the Republic of Dagestan. I was once again convinced that Russia is rich in talents. The competition was high. For example, one of our contestants, chief foreman K. Zhidkova, who took third place in the International Contest of Military Applied Skill "Warrior of the Commonwealth" in Moscow, took only third place among our women military personnel and eighth among all the participants of "Pearls of the Caspian - 2013 ".

In 2014, we plan to hold a similar competition among male military personnel and employees of the Caspian flotilla. I think this competition will be interesting. 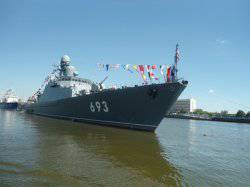 - What tasks does the flotilla solve at the final stage of the school year and what does it expect in the winter period of combat training?

- The main tasks that we face in the present period are the completion of state tests of new rocket ships of the 21631 project “Grad Sviyazhsk”, “Grad Uglich”, which are now being carried out in the Caspian Sea. In the dynamics of winter combat training, the development of ships of new projects, vessels that, in accordance with the state defense order, have entered the Caspian Flotilla, will be continued.

In this direction, first of all, it is necessary to work out the tactics of the actions of rocket ships when attacking coastal targets. This task by the surface ships of the Navy was not previously worked out due to the absence in the past in the armament of the ships of the Caliber missile systems intended to destroy not only naval targets, but also stationary land and limited mobile coastal targets. The ships with the Caliber-NK missile system were the first to arrive at the Caspian flotilla. 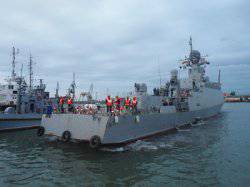 Based on the results of the use of rocket weapons during combat training activities, recommendations will be made on making amendments to the existing guidance documents. Concluding the conversation, I would like to thank all the personnel of the Caspian Flotilla for their impeccable service, to wish the servicemen, their families, workers and civilian employees good health, continued success in our hard work, professional growth and family well-being. Special thanks to commanders of all levels. The success of the flotilla is first and foremost their merit; they bear the greatest responsibility and burden. It is on the work of the command link that the final result depends - the high combat readiness of the flotilla.

Ctrl Enter
Noticed a mistake Highlight text and press. Ctrl + Enter
We are
Meeting on the development of the military education system
14 comments
Information
Dear reader, to leave comments on the publication, you must to register.