Victory Day: Why was Baku not given the title of Hero City? 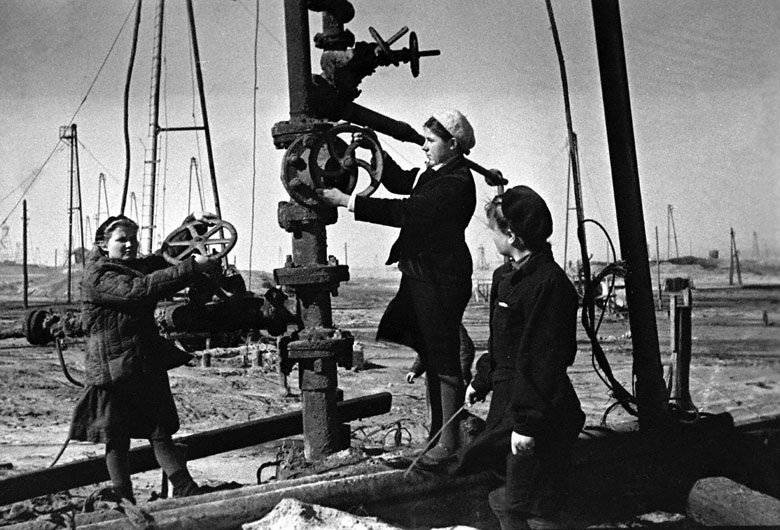 Without oil Baku, the USSR could not win the war with Hitler


The further we move away from the terrible war of 1941-1945, which took the lives of more 30 millions of citizens of the USSR, the more we realize that victory over fascism was achieved not only thanks to the heroism of Soviet soldiers. No less significant was the contribution to the common feat of those regions of the Soviet Union that, although not occupied by Hitler’s troops, played a vital role in ensuring the combat capability of the Red Army.

One of these rear cities was the capital of the Azerbaijan SSR. It's no secret that almost 90% of fuel for refueling Soviet tanks and aircraft were delivered to the front line from Baku. In wartime, there was practically no alternative to Baku oil. So, in 1941, a total of 33 million tons of oil was produced in the USSR, of which 23,6 million tons were produced in Azerbaijan.

In other words, the Azerbaijan SSR, which became the main supplier of oil and oil products for the Red Army, played a key role in the great Victory. Former Russian ambassador to Azerbaijan, Vasily Istratov, admits: “Without the natural resources of Azerbaijan, there would be no victory in the Great Patriotic War.” And Marshal Rokossovsky wrote in his memoirs: “In every raid of the Soviet tankmen, in every victory over the German fascist forces, a considerable part of the success belongs to the Baku oil industry workers.”

Nevertheless, Stalin, and later other Soviet leaders for some reason did not dare to assign Baku the honorary title of the “Hero City”. Only the cities of the RSFSR, Belarus and Ukraine, which were under German occupation and became the scene of fierce battles, were awarded this high status. However, according to many experts, Baku, given its exceptional role in the rear, was rightfully worthy of the name of the “Hero City”.

"Gray Cardinal" of the Stalin era

Stalin’s refusal to confer honorary status on the capital of Azerbaijan is largely associated with the name of his closest ally, Commissar Anastas Mikoyan, who during the Great Patriotic War occupied key positions in the leadership of the USSR. From 1941, he headed the Committee of Food and Apparel Supplies for the Workers 'and Peasants' Red Army, and also was a member of the Council for Evacuation and the State Committee for the Rehabilitation of the Economy of the Liberated Regions. In 1942, by order of Stalin, Mikoyan was included in the USSR State Committee of Defense.

According to historians, it was on the recommendation of Mikoyan that Stalin organized in the late forties the so-called “resettlement” from Armenia to Azerbaijan 200 thousand Azerbaijanis. In fact, it was legalized exile, which was carried out according to the Decree of the Council of Ministers of the USSR No. 4083 from December 23 1947. It lasted until the year 1950.

Mikoyan, who was called Stalin's "gray cardinal", did not hide his negative attitude towards Azerbaijan. When, after the victory over Hitler in the Kremlin, the question of assigning the honorary title of “Hero City” to several cities of the USSR was discussed, Mikoyan strongly opposed the inclusion of Baku in this list.

In the next few decades, the leaders of the Azerbaijan SSR and cultural figures of the republic have repeatedly appealed to the highest state and party instances of the USSR with a request to reconsider this issue. However, their calls were not heard.

However, the contribution of Azerbaijan to the common "piggy bank" of victory in the Great Patriotic War was based not only on the oil achievements of this Soviet republic. Many Azerbaijanis then volunteered for the front - to defend their homeland. For four years, over 600 thousand people from Azerbaijan were called up to the ranks of the Red Army. By the end of the war, 128 natives of Azerbaijan became Heroes of the Soviet Union.

A native of the Sabunchi village in the suburb of Baku, Richard Zogh, being on the eve of World War II in Japan, was one of the first to inform Stalin about the exact date of Hitler’s attack on the USSR: the end of June 1941. Azerbaijan was glorified all over the world and the fighters from Azerbaijan: Mamedov, Ahmedzade, Berezhnoy, Andreev and Mejidov, who hoisted the Victory Banner over the Brandenburg Gate in Berlin in the early morning of May 9 2.

9 May 2013 in Baku commemorated the heroes of the Great Patriotic War. Azerbaijani President Ilham Aliyev laid a wreath at the monument to the Hero of the Soviet Union Azi Aslanov. There were legends about Major General Aslanov in his lifetime. 19 November 1942 began a counteroffensive by the Soviet forces at Stalingrad. During the day, the tankers Aslanova fought over 40 kilometers with fights! By decree of the Presidium of the Supreme Soviet of the USSR from 22 December 1942, Azi Aslanov was awarded the title Hero of the Soviet Union. 24 December 1942, the newspaper Krasnaya Zvezda wrote: “History wars have not yet seen the fighters who fought so bravely as Azi Aslanov and his fighting friends. No matter how strong the enemy tanks and infantry are, they cannot be compared with the part led by the powerful, strong-willed commander, Hero of the Soviet Union Azi Aslanov. ”

13 January 1943, the newspaper of the Stalingrad Front, Son of the Fatherland, noted: “... how to link tank operations with infantry and artillery actions, you need to learn from the part of the guard, Colonel A. Aslanov. Let the combat skills of the tankers of the Hero of the Soviet Union A. Aslanov be a model for all our units. ” Tankmen Aslanova participated in the liberation of the cities of Belgorod, Sumy, Akhtyrka, Poltava and Mirgorod. 24 January 1945, Azi Aslanov died in battle. He was 35 years old ...

"Fearless Sons and Daughters of Azerbaijan"

7 May 2013 of the year in the Crimea, on Sapun-gore, opened a monument to the 77 of the Azerbaijan Red Banner Order of the Suvorov Simferopol Rifle Division. On his pedestal is written dedication "Fearless sons and daughters of Azerbaijan". 77-division participated in the liberation of the North Caucasus from the Nazi troops, then led the fighting against the Nazis in the Crimea. For the liberation of 13 on April 1944 of the city of Simferopol, she was given an honorary name - Simferopol.

Ctrl Enter
Noticed oshЫbku Highlight text and press. Ctrl + Enter
We are
What you didn't want to know about EnglandRevealed the secret of provocation in the American Boston
217 comments
Information
Dear reader, to leave comments on the publication, you must to register.