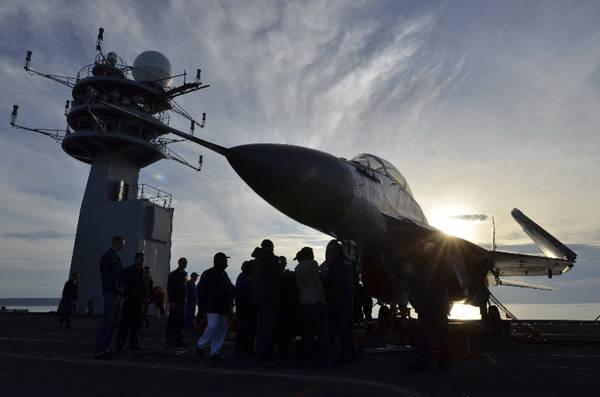 The crew and the transfer team of the aircraft carrier Vikramaditya complete the final preparations for the transfer of the ship to the Indian Navy. The official ceremony is scheduled for Saturday, November 16. The Russian delegation is headed by Vice-Premier Dmitry Rogozin, and from the Indian side, Arakkaparambil Curian Anthony, Minister of Defense.


“The ceremony will take place in any kind of weather,” assured the correspondents of “RG” on Sevmash, where the ship is now tested. The commander of the Indian crew, Commodore Suraj Berri, and the responsible deliverer, Igor Leonov, allowed us to explore the entire aircraft carrier from the inside and outside.

At the exit to the White Sea, Igor Leonov said, Vikramaditya will take on board the necessary supply of diesel fuel and take a course to the Barents Sea. And then around Europe, to the place of permanent basing off the west coast of India.

The formal diarchy will be over by that time: since November 16, the ship will completely go under the command of the Indian crew led by Commodore Berry. However, at the time of the transition to the crew will be seconded a team of factory specialists and contractors in the number of 183 people. The exact route and timetable for the transition, for obvious reasons, is not detailed, but as one of the possible options, the passage through the Suez Canal is considered ...

Now, on the flight deck, work is being completed on the restoration of a special anti-slip coating, fairly worn during the training takeoffs and landings of the deck MiGs in August-September in the Barents Sea.

Ctrl Enter
Noticed oshЫbku Highlight text and press. Ctrl + Enter
We are
Russia and India finally agreed on Vikramaditya work scheduleThe problems of the aircraft carrier "Vikramaditya" were to blame foreigners
33 comments
Information
Dear reader, to leave comments on the publication, you must to register.