In the struggle for the "right to divide" 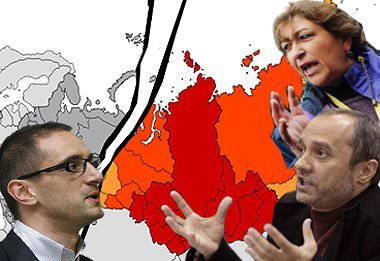 The draft law on punishment for the propaganda of separatism touched upon the “painful point” of the radical liberal opposition.


During the discussion of the initiative of State Duma deputies to introduce criminal responsibility for propaganda and calls for separatism, one circumstance is becoming more and more clear. It lies in the fact that in Russian society there is a group (otherwise you will not name it), openly declaring its support for separatism. Like ideologies and practices. The group is seriously alarmed by a legislative initiative aimed at strengthening the unity of the country. Moreover, he considers it his duty to openly oppose.

It is clear that there is a self-disclosure, self-discovery of the group members as enemies of the vital interests of the people and the state. Characters who declare sympathy for separatism simply “burn” and lose forever any reputation. Therefore, the stakes in the game are so high that customers do not spare public agents, turning them into kamikaze speakers.

The contours of the new technology of the destruction of the Russian Federation appear more and more clearly - social discontent with the help of various kinds of nationalism should be channeled into separatist madness. One has only to start and in a few years the territory of the country turns into a quilt. It will not consist of multi-colored lawns, mountain valleys and sea coasts. And from the bloody, freezing and hating each other stumps of the once common space.

The way events unfold, shows their non-randomness. The escapades of the “jerk” of Sergei Medvedev, one of the liberal “ultras” Yevgenia Albats, a political analyst on the call of Stanislav Belkovsky, all started intelligence reconnaissance. The society tried "on the teeth" - whether the immune system and the instinct of self-preservation still remained. We found out what remained, and decided to move on to a protracted positional war.

Forward thrown infantry. A kind of "penal battalions" liberal-rabid army. So, for example, on the odious online edition of "Edge" appeared immediately two notes, "protecting" the idea of ​​separatism.

One was made by Alexander Podrabinek. The same scumbag who a few years ago spat in the direction of the veterans a stock of anger accumulated, as you can see, for many years. Soldiers of the Great Patriotic War Podrabinek, in particular, said: “It only seems to you that your holiday is honored and honorable. It only seems to you that you are universally respected. You inspired it a long time ago, but your time is over. Your homeland is not Russia. Your homeland is the Soviet Union. You are Soviet veterans, and thank God for your country, 18 is no more ... the Soviet Union is ... millions of people tortured to death in the gulag to the sounds of the filthy mikhalkovsky hymn. ”

About the then Chairman of the Council of Moscow Veterans Vladimir Dolgikh, who was seriously wounded in the battle with the Nazis for Moscow, Podrabinek wrote: “Older people should remember this name. A veteran of totalitarianism! .. You, Vladimir Ivanovich, from that gang of communist criminals who tried to destroy our country, and then managed to happily avoid court and punishment. Now you again surface to justify your past. The Soviet past is bloody, deceitful and shameful. ”

Now, calling the parliamentary initiative “hysterical in the State Duma about separatism,” this morally deviant citizen says: “What’s terrible in separatism, nobody explains ... There was a big Yugoslavia - there were seven small independent states. It is sour to the federal authorities, and it is good for people; now they decide for themselves how to live. The real horror of separatism is not in the consequences, but in the painful process ... Stupid Milosevic, in the fight against separatism, drowned the country in blood. ”

So, it turns out that the residents of the “BYU” - the former Yugoslavia, as it is semi-proactively called in the Hague (where the “stupid Milosevic” died), became very good. Especially its Orthodox majority, that is, the Serbs. Deprived of the ancestral lands, "paternal coffins", access to the sea, the sacred Kosovo and Metohija. They felt very good after they bled to death, fell into poverty, were humiliated, demonized, and continue to be humiliated. There is hardly any doubt that the Russians, especially the Russians, will be even “better” in the case of the separatist division of the Russian Federation. But after all, this is what the Granist columnist wants.

Less “famous”, but apparently no less worthy (the text is placed next to Podrabinek), the author of the same resource, named Skobov, quite extensively argues in favor of separatism using the example of Chechnya: “I justified and justify Chechen separatism ... When the new law will be passed, Officially registered media are unlikely to give me the opportunity to express my views. ” The author sees the problem here. Covering the lace of ill-concealed delight in front of terrorists and bandits, he calls Kadyrov a “dictator”. And along the way he theorizes: “Attempts to forcefully suppress sustainable separatist aspirations lead to large-scale violations of human rights. In the end, the separatist territory is still separated, and the dissenting minority is oppressed much more than if this territory were released immediately. ”
That is, release immediately, and all feel better.

And let yourself be the same 25-year-old resident of Yakutia, who was recently fined 15 thousand rubles, continues to create a network community with the aim of "revolutionary separation" of the republic from Russia. Let his nationalist group grow, where they have already managed to enroll about 600 people. Let, together with like-minded people from Turkey, they promote the idea of ​​creating a single Turkic state, the Great Turan (on the spot and instead of the Russian Federation).

After all, there is nothing "terrible." Albats spoke about the immodestality of the collapse of the country in the Urals. About this, word for word, "shoot out" with friendly subs "Friendly". The same will be repeated again and again on those dozens of sites, in those numerous newspapers that the “non-systemic opposition” has at its direct disposal.

The prospect of a new law largely overlaps the opportunity to “work” on the topic of “separatism”. The theme, apparently, is defined by curators as one of the main ones. So, the propaganda of separatism, unpunishable under the law, is growing. And in their struggle for the “right to divide,” the liberal radicals, as a last resort, introduce the pathos of upholding universal human rights.

Ctrl Enter
Noticed oshЫbku Highlight text and press. Ctrl + Enter
We are
About Stalin and KhrushchevWhat you didn't want to know about England
53 comments
Information
Dear reader, to leave comments on the publication, you must to register.